Force in Focus: The Power of the Force Action Figures 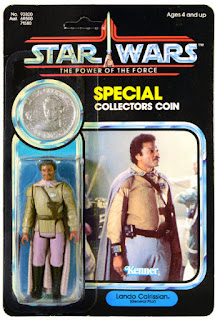 Firsts and Other Notables
With Return of the Jedi gone from theaters and no new Star Wars films on the horizon, "The Power of the Force" represents Kenner's attempt to keep their line of Star Wars action figures going in the absence of a specific film tie-in. In practice, this line is mostly composed of Return of the Jedi holdovers; there is no new Princess Leia figure, but Han, Luke & Lando are represented in their remaining Jedi costume changes not already be adapted in action figure form.

Along with these fifteen new figures, a large chunk of pre-existing figures were re-released on Power of the Force packaging, ensuring kids could still get a hold of a Darth Vader or Chewbacca figure (I suspect, given my age, that many if not most of the Star Wars figures I had as a kid that were purchased at retail - vs. a garage sale or whatever - were repackaged as part of this line). The other addition to the line, in attempt to create some added value (and probably to get kids who may already have a Vader or Chewie figure to double dip) was a silver coin packaged with each figure.

Despite the coins and the inclusion of older figures, Star Wars' popularity was, by 1984, on the wan (this is the "dark times" of Star Wars fandom, after Jedi and before the launch of the Expanded Universe in the early 90s, the Special Editions, and the Prequels, which more or less brought the franchise back to stay), and "Power of the Force" never reached the sales heights of the earlier lines. As a result, many of the figures in this line represent some of the most sought after figures on the collectors market, thanks to a combination of genuine demand for some truly unique figures and a diminished supply relative to earlier lines.

One such highly-sought-after figure is the Stormtrooper Disguise Luke, one of the few non-Jedi-specific figures in the line, which recreates one of the more iconic scenes from Star Wars. It would take until the relaunch of the Power of the Force line in the mid-90s before we got a corresponding Han Solo in Stormtrooper disguise figure. 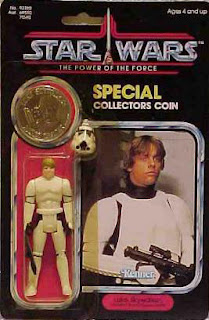 Another is Yak-Face, generally considered the most "valuable" figure of the vintage line, due to the fact that it was only ever released internationally. 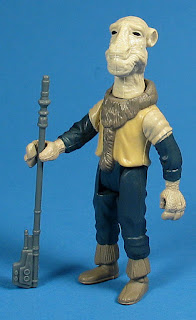 The Anakin Skywalker figure represents the only mail-away figure of this line (it was also available carded with a coin). 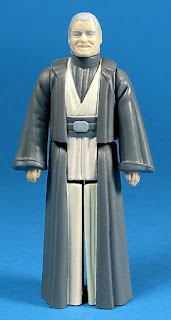 The Imperial Dignitary is one of the more notorious of all Star Wars figures, on account of being an "action" figure of a nameless bureaucrat, with no accessories or film-relevance to entice buyers. When you look just at that figure, it's hard not to figure how stuff like GI Joe and Transformers was selling better.

Favorite Figure
A couple of contenders in this line include the Stormtrooper Luke figure, a figure I always wanted but never had. Another is Han Solo in Carbonite, which is one of those figures with a great gimmick (it would have been easy to just release a disheveled "Jabba's Palace" Han figure, but Kenner went the extra mile to make a specific "in Carbonite" figure, allowing kids to "thaw" Han from the carbonite block). But I'll go with the lightsaber-launching version of Artoo, which is the version of Artoo I had as a kid, and (like the pull-apart Threepio in the Empire line) represents a clever way to push out a new figure of a character who doesn't undergo nearly as many costume changes as the Big Three. Plus, it never hurt to have an extra lightsaber lying around. 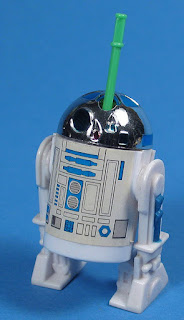 Austin's Analysis
Though technically it's own line, independent of a connection to a specific film, this batch of figures feels very much like a third wave of Return of the Jedi figures (with Stormtrooper Luke thrown in). And like the second wave of RotJ figures, it feels more like a random assortment of figures than a cohesive wave: here's a couple more Ewoks, some more Jabba's palace aliens we didn't get to yet, oh, and we'll immortalize the remaining costume changes for Luke & Lando. Yet at the same time, this line also feels especially geared towards collectors & non-casual Star Wars fans.

Of course, some of that is subconscious bias on the part of hindsight, since so many of the figures in this line are now amongst some of the most valuable figures of the entire vintage line. But there's tons of things about this line that, even in 1984, made it seem geared especially towards fans. Both the Stormtrooper Luke and Carbonite Han Solo figures are fun figures with unique features which allow for specific scenes to be recreated (and, like the Leia Boush figure, Stormtrooper Luke can function as two figures, depending on whether or not he's wearing the helmet). Ditto Artoo with Luke's hidden lightsaber secreted away inside, which takes its inspiration for a fun action figure from an important movie scene. The new RotJ-themed Luke & Lando figures continue the lines' newfound level of craft with some soft-goods cloaks & heightened attention to detail. And the Anakin Skywalker figure, with its limited articulation & lack of accessories, seems specifically geared to hardcore fans obsessed with the movies or determined to collect all the figures; few kids were likely clamoring for an old man Jedi figure, especially one without a lightsaber who did nothing in the movie beyond appearing as a ghost (which, of course, is still more than the Imperial Dignitary has going for it).

"The Power of the Force" - and the entire vintage line of movie-based figures, a line which in its heyday at the height of Original Trilogy's popularity, sold figures in the millions and more or less created the template for the modern action figure, paving the way for the 80s boom - goes out, then, with neither a bang nor a whimper. Rather, it ends with the kind of slow-burn fizzle that accompanies something with a small but devoted cult-like audience. Which is appropriate, given that, as George Lucas moves on to other things, thereby relegating the future of the property, for the time being, to Ewok-based TV material (give or take a Droids), it is in the realm of "cult favorite" that Star Wars will exist, moreso than "pop culture behemoth".

At least for a little while. 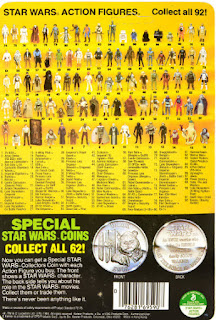 Email ThisBlogThis!Share to TwitterShare to FacebookShare to Pinterest
Labels: Force in Focus, Star Wars, The Power of the Force, toys