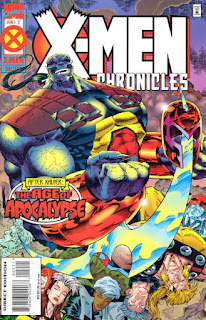 In a Nutshell
Wolverine attacks the X-Men as Rogue & Gambit's relationship falls apart.

Plot
Upon his successful rescue of Jean Grey from Apocalypse's slave pens, Weapon X, angry that Magneto was unwilling to mount a rescue effort, announces that he and Jean are leaving the X-Men. Meanwhile, Holocaust meets with his agent, Wolverine, and orders him to find Magneto and make him watch as the person closest to him is killed. Days later, the X-Men arrive in the ruins of Denver, rescuing a group of humans from a gang of bandits. Wolverine, watching from the shadows, empowers two of the gang members, and one of them manages to stab Magneto. The concern shown by Rogue & Gambit makes Wolverine realize they are the closest to Magneto, not, as Wolverine suspected, his son Quicksilver. Back at the X-Men's base in New Mexico, Gambit tries to get some time alone with Rogue, but she insists on helping the recovering Magneto plan their next mission. As Wolverine picks up the scent of the X-Men and starts tracking them to their base, Gambit confronts Rogue, looking for a commitment, but Rogue apologizes and runs off. Gambit then goes to Magneto, conducting a training session in the woods outside the base, and talks to him about his feelings for Rogue. As Wolverine draws nearer, Rogue interrupts Magneto & Gambit, saying she needs to talk to Magneto. But when Magneto reveals he's found a way to neutralize her powers - such that only he can touch her - an angry Gambit confronts the pair. Just then, Wolverine attacks the X-Men's base. During the ensuing fight, Magneto's injury is exacerbated, but Gambit comes to both he and Rogue's defense, fighting off Wolverine, after which Gambit announces he too is leaving the team, saying it's time for Gambit to go it alone again.

Firsts and Other Notables
This issue opens in the wake of Weapon X rescuing Jean from Apocalypse (and losing his hand), as shown in Factor X #3, and depicts Weapon X & Jean leaving the X-Men. 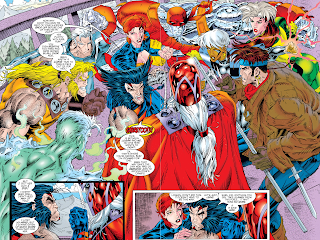 In the wake of their departure, Rogue (already Magneto's second-in-command at this point) and Gambit grow worried about Magneto's mental state, and the issue takes great pains to paint the trio as the best of friends, with Gambit & Magneto best buds with Rogue as Magneto's right hand and Gambit's would-be paramour.

However, Rogue finds herself growing closer to Magneto, and when he reveals he's found a way to nullify her powers such that he - but only he - can make physical contact with her, Gambit, feeling betrayed, quits the team and leaves them both behind. 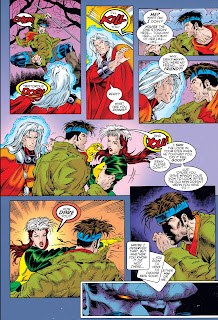 The villain of this issue, an agent of Holocaust (who is now in his armor), is Wolverine. Aside from having big Killjoy-esque blades on his forearms and some tracking abilities, his resemblance to the prime Wolverine is minimal. As far as I know, he's not meant to represent the AoA version of some existing character. 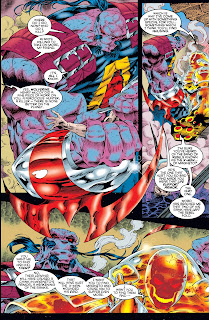 As with the previous issue, this one concludes with a series of pinups featuring notable events in the history of the Age of Apocalypse. 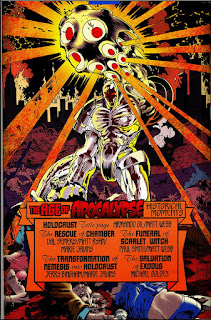 A Work in Progress
Colossus & Gambit are both still members of the X-Men, along with Rogue, Iceman, Sabretooth, Quicksilver & Storm.

Colossus says that Apocalypse’s culling is Russia wiped out the entire country.

Magneto is hit with a non-metallic Knife, possibly the first time ever that something non-metallic actually hit him. 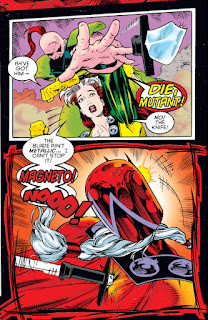 At this point in time, the X-Men are operating out of a base in New Mexico.

It’s noted that Magneto moved the X-Men to America (from Wundagore) specifically after Apocalypse’s emergence and the events of issue #1.

Quicksilver & Rogue briefly discuss Rogue being second in command, not Quicksilver. Quicksilver also speculated that soon there will need to be two teams of X-Men. 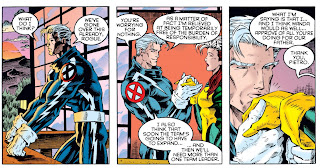 Austin's Analysis
This issue begins and ends with departures: first Weapon X and Jean Grey, then Gambit. Thus, it essentially chronicles two of the more significant changes to Magneto's X-Men previously mentioned during the course of "Age of Apocalypse". In that regard, this is, theoretically, fleshing out events that inform the backstories of two separate series (Weapon X and Gambit and the X-Ternals), showing what had previously just been told via dialogue and narrative captions. In practice, however, it's hard to see what has been gained by showing these departures, as the scenes depicted herein add very little to what had previously been known. It was said that Weapon X left the X-Men, enraged that Magneto wouldn't commit to rescuing Jean, and that is in fact what is shown here. Similarly, Gambit left the X-Men when it became clear Rogue had feelings for Magneto (which he reciprocated), and that's largely what is presented here (ironically, this issue tries to sell the idea that, prior to Gambit's departure, Rogue, Magneto & Gambit are a trio of friends closer even than Magneto and his own son, presumably to better twist the knife of Magneto & Gambit's falling out, but that is mostly told through Wolverine's observations, rather than shown in any meaningful way).

The evil AoA Wolverine in this issue is also a curious character, one without seemingly any obvious prime counterpart, who never appears (nor is even referenced) outside of this issue. The reason for why he shares a name with the X-Men's most popular character are unknown; it's almost as if someone realized "hey, since we're calling this version of Wolverine 'Weapon X', the name 'Wolverine' is up for grabs, and we can't *not* use it", then just applied it to this otherwise random character. All in all, between this story and the previous issue's chronicle of the X-Men's first encounter with Apocalypse, the series proves itself to be very much the spiritual companion of its prime counterpart, telling stories well enough, but which nevertheless do little to justify their existence, either in the level of craft involved in their telling or by telling a narratively-important or character-defining story. I don't mind reading about the first mission of this group of X-Men or seeing a heartbroken Gambit leave the X-Men, but there's very little in either issue to justify having spent the time on it, instead of just letting all of this remain in the unshown past.

Next Issue
Next week: Generation Next #4 and X-Man #4, as the regular Age of Apocalypse series all come to an end.