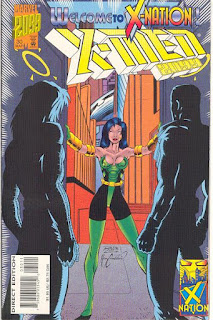 In a Nutshell
Cerebra quits the X-Men in order to guide the kids of X-Nation.

Plot
After checking on her comatose father, Cerebra runs into Billy the Kid, who tosses her a coin that teleports her away. Meanwhile, Clarion & Nostromo arrive in Halo City, and are rescued from a mugger by Meanstreak. In the bowels of the city, Cerebra appears before Doom, who tells her that a mutant with the power to change the world is in the city, and needs her guidance. Later, Clarion & Nostromo are rescued from the Wild Boys by Cerebra, who directs them to the Xavier Shelter for Indigent Children, a shelter run by the Sisterhood of the Howling Commandments. She then meets with the X-Men, and tells them she's leaving the Protectorate in order to guide the young mutants in the city. Elsewhere, Doom expresses his disappointment in Morphine, earning Morphine's ire, who declares he's going to find the mutant messiah for himself. Cerebra then arrives at the Xavier Shelter to find the mutants of X-Nation waiting for her.