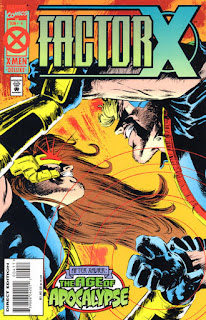 In a Nutshell
Cyclops & Jean liberate the Pens & battle Havok.

Plot
Havok gives the order to kill everyone in the Pens, a directive that doesn't sit right with both Beast, who considers their deaths a waste of good genetic material, and the Bedlam Brothers, who feel like the slaughter of the prisoners in cold-blood is beneath their status as alpha mutants. Bu when Havok receives word that his brother is still alive, he tasks the EMF with tracking him down instead. Elsewhere, Cyclops & Jean Grey are preparing to take out the Brain Trust so as to remove its stifling effect on the prisoners. They run into the Bedlam Brothers, who agree to help them hold off the Guthries, then cut the power. Meanwhile, Apocalypse's forces enter Haven to arrest Angel, who abandons his neutrality to fight them off and flee. Back at the Pens, Jean is able to destroy the Brain Trust, while Havok learns the captive Scarlett is pregnant. When the room goes dark, he knows it's his brother's doing. As Cyclops & Jean lead the newly-freed prisoners out of their cells, the animalistic mutants of the Kennel attack Beast, prompting him to flee. Havok tracks down Cyclops and attacks him, but Cyclops manages to knock out his brother. He then addresses the former prisoners, telling them they need to get off the island, promising them that somewhere out there is a better world. Later, Havok wakes up, and vows to find and kill his brother once and for all.

Firsts and Other Notables
Factor X concludes here, on something of a cliffhanger, as Cyclops & Jean are leading the Pen prisoners out of the city, while Havok (once again) vows vengeance on his brother (which will be followed up in X-Men: Omega).

Terry Dodson is back, helping out on art again, once more trading off pages with Epting.

A Work in Progress
Cyclops & Jean’s encounter with Nate Grey, which is shown in X-Man #4, is referenced, setting this issue after that one. 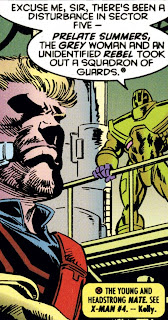 That encounter has also left Jean feeling more powerful than ever. 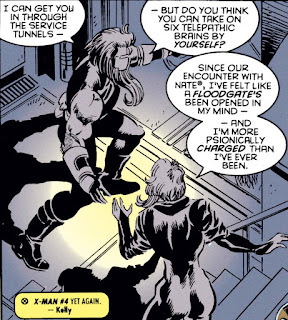 The Bedlam Brothers throw in with Cyclops & Jean, not feeling up for cold-blooded murder and irritated by the Guthries. 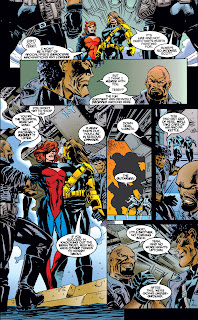 Angel’s neutrality ends when Infinites come to shut down Haven, and he attacks them before fleeing. 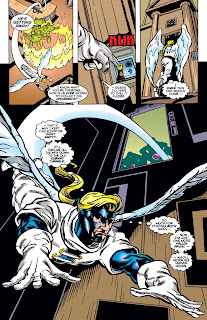 It is confirmed Scarlett is pregnant; Havok doesn’t take the news well (this marks the final appearance of Scarlett, her pregnancy meant to just apparently add a little intrigue to her scenes throughout this series). 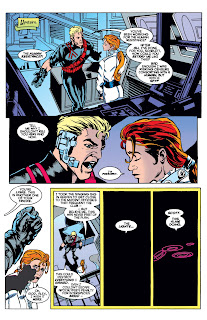 The same wolf/maybe Wolfsbane from issue #3 wakes up Havok at the end of the issue. 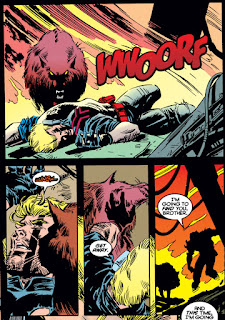 Austin's Analysis
Factor X ends a little weaker than it began, in part because Steve Epting needed to be spelled a bit on the last two issues, but also due to the inevitable fact that Shakespearean scheming is always more entertaining that seeing those schemes put into action. But this nevertheless remains one of the standout Age of Apocalypse books, in part because it does something unique: it gives its characters an arc. When the series begins, Cyclops & Havok are essentially the same: one is more favored than the other, one a little more intense, but they are essentially the same. But over the course of the series, Cyclops' innate goodness is, first, shown, then gradually inflamed as he encounters Jean and decides to rise up against Apocalypse. Havok, meanwhile, goes from "simmering resentment" to raging egomaniac over the course of the series. Whereas most of the Age of Apocalypse books are plot-first, character-second affairs, here the various plot machinations are, ultimately, secondary to the development of those two characters and their relationship with each other. That, combined with the moody, atmospheric (if not entirely consistent) art and it's perspective coming from inside Apocalypse's regime instead of outside, sets it apart & above much of the rest of the event, even if its end can't quite live up to the promise of its beginning.