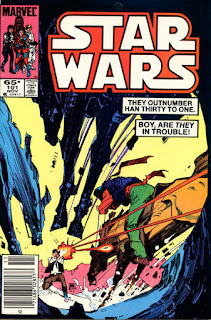 In a Nutshell
Han is transported across the galaxy and helps save a star-crossed romance.

Plot
Leia tries to convince Han to fly a mission for the Alliance, something he's reluctant to do, sparking an argument that's broken up by the newly-arrived Fenn Shysa, who is accompanied by Han's childhood friend, Bey. As Fenn & Leia catch up, Bey advises Han that if he cares about Leia, he should tell her. Later, Han, joined by Threepio, Artoo and Plif aboard the Falcon, investigates a series of strange energy bursts appearing in the skies over Endor. One of the bursts hits the Falcon, sending it careening across space to crash land on a strange planet. There, Han helps rescue a young couple from bandits. They are Risa & Gil, the princess & prince of two kingdoms, which each rule one side of the planet. Their upcoming wedding is intended to solidify the truce between the two sides. As Artoo & the Hoojibs work on repairing the Falcon, Han returns with Risa to her father's palace, where he helps expose Marius, Risa's uncle and the court vizier, as the person responsible for the attack on Risa & Gil. With his ship repaired, Han flies back to the Alliance, and to Leia, his feelings for her having inspired him to ensure Risa received a happy ending.

Firsts and Other Notables
As a footnote attests the story in this issue takes place before issue #99, as it begins with Han chafing at being given orders to carry out a mission for the Alliance (something he does willingly in #99, despite his initial objections here), especially when the Alliance leadership is cutting him out of the big picture.

As such, this features the official return of Mandalorian/Bob Fett cosplayer Fenn Shysa to the series (even though technically he's already been hanging around with the Alliance for a few issues at this point). 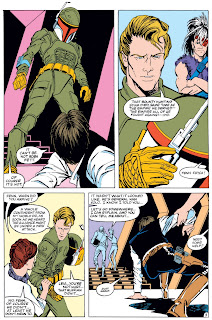 With Shysa is Bey, Han's childhood friend from Correilla, in what was intended to be his first appearance but who, like Fenn, has already appeared (and been revealed to be a traitor working with the Nagai) in the series at this point. The motivation for his involvement here is down to "he was hanging out with Fenn when Fenn decided to throw in with the Alliance and he tagged along" (though of course the "latter" reveal of his connection to the Nagai complicates that). 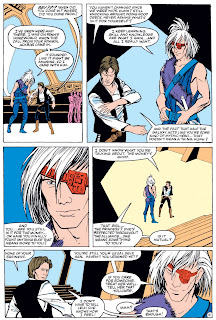 Bill Seinkiewicz does the cover of this issue.

Just Yesterday, In a Galaxy Surprisingly Close By
Han recognizes a horse on sight, and refers to it as a horse (as opposed to, I dunno, a Debraxian Burden Beast or something).

Austin's Analysis
The long-awaited & delayed return of Fenn Shysa and the debut of Bey (coming, of course, after Bey's big character turn that wrote him out of the series for the time being), is...mostly a dud. Or rather, a non-factor, as they do little in this issue aside from announce their presence, lending no additional context or meaning to their previous appearances or, in particular, Bey's heel turn at the climax of issue #100 (maddening as it is to have this issue published out of sequence, it's now easy to see why Marvel figured they could get away with it). The rest of the issue is, unfortunately, pretty standard fare for the series, the kind of "drop one of the main characters into another genre for an issue" story that routinely pops up in fill-ins, between-arc breath-catchers, or annuals. Having Martin on hand helps elevate the tale of Han giving a Romeo & Juliet tale a happy ending, but it's still disappointing to have the book doing these kinds of stories amidst the larger Nagai storyline, and with (unknowingly for the creators, granted) so few issues left in the series.

Next Issue
Return to Iskalon!