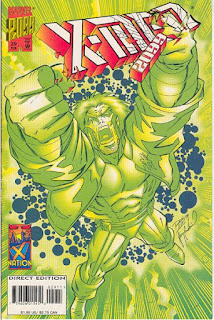 In a Nutshell
Morphine Somers defeats Graverobber an the Undead.

Plot
As Fitz absorbs all of Halo City's power, plunging the city into darkness, Gunnar Heywood contacts the X-Men. When they arrive on the scene, a fight breaks out between the Undead and the X-Men. The X-Men are once again on the verge of defeat when Morphine Somers arrives with a captive Zail Haddad. He agrees to give Zail to Graverobber, but when Graverobber claims his prize, Morphine triggers a neuro-bomb in Zail's restraints, disrupting the bio-electric energy of Graverobber animating the Undead. They all collapse, dead again, including Tina, but Fitz is visited once more by Reiko, who tells him he is not dying, merely transforming, before he regains consciousness. Elsewhere, Victor Ten Eagles arrives in Halo City to warn Xi'an that someone is targeting the Lawless. Later, the X-Men hold another funeral for Tina, while Morphine meets with representatives of Herod. Per their bargain, he hands over Graverobber and the Undead to Herod's agent, and is told the contract on his head has been lifted. Giving the Undead to Herod doesn't sit right with Cerebra, but Morphine doesn't much care. However, as Herod's craft flies away from the city, it's shot down, allowing a returned Doom to claim the Undead for himself. He then turns his attention to Halo City, the city he built whose future, he believes, belongs to him.