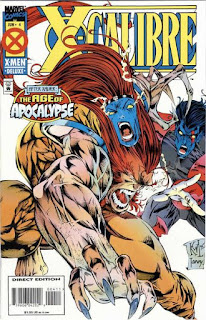 In a Nutshell
The Shadow King attacks Avalon.

Plot
In Avalon, the newly-formed X-Calibre prepares for the second wave of Apocalypse's assault on the sanctuary, which comes in the form of the Shadow King, who possesses various inhabitants and uses them to attack the team. When Damask is able to use her power to briefly harm Shadow King, Nightcrawler asks how his power work, and she explains that when Shadow King moves from mind to mind, he travels briefly through a sub-dimension. This gives Nightcrawler an idea as to how to defeat him, and when Shadow King possesses Mystique, Nightcrawler puts it into action. Grabbing Damask & Switchback, he teleports the three of them, hoping that the sub-dimension he briefly travels through when teleporting is the same as the one being used by the Shadow King. In the brief moment the trio is in that dimension, Switchback uses her power to keep them there long enough for Damask to locate Shadow King and use her power to drive him out of Avalon. But one of his thralls still tries to kill Destiny, prompting Doug to sacrifice himself to save her. In the wake of Doug's death and the destruction wrought by Apocalypse on her sanctuary, Destiny agrees to return with Nightcrawler to the X-Men and help bring down Apocalypse.

Firsts and Other Notables
The series concludes with Nightcrawler succeeding in his mission to recruit Destiny, though that mostly happens due to forces outside of Nightcrawler's control and not via anything he intentionally does. Their return to New York is depicted in Amazing X-Men #4 (humorously, with the pair appearing in a burst of smoke, suggesting they simply teleported in from Antarctica, which we know isn't possible), with Destiny's role in the climax of the story shown in X-Men: Omega. This marks the final appearance of the rest of the X-Calibre characters (though Shadow King returns in X-Men: Omega). 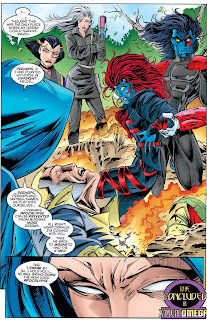 So the big "defeat the Shadow King" moment, which actually uses are three character's power in clever ways (Nightcrawler to get there, Switchback to keep them there, Damask to attack), is nevertheless built on a pretty big assumption on Nightcrawler's part (that he and the Shadow King use the same dimension to move about); the fact that he's right makes very little sense, as the Shadow King should by all rights be using the astral plane, and there's no reason to think Nightcrawler would be accessing it when teleporting. It's a cool moment, but it's built on some dubious logic. 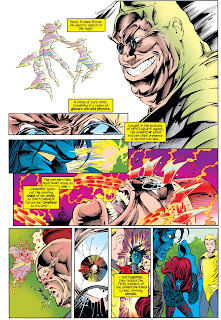 AoA Doug Ramsey dies this issue, going out the same way as his prime counterpart, taking a shot meant for someone else. 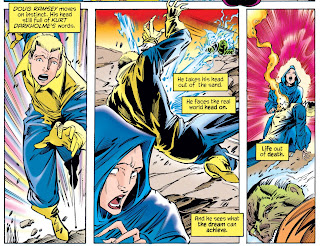 A Work in Progress
Switchback uses her power to cure herself of a headache, and it...makes no sense (it turns out the Shadow King was in her mind, causing the headache, and the time shift forced him out. That...doesn't really help the explanation). 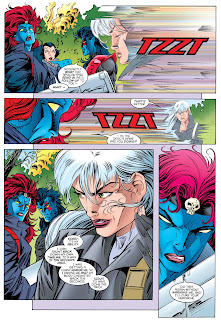 Doug’s power allows him to generate a translation field around Avalon, enabling everyone to communicate.

The Grim 'n' Gritty 90s
The first panel of the issue hits two 90s artistic tropes at once: Nightcrawler’s feet are barely rendered, and Mystique is positioned with her butt to the reader. 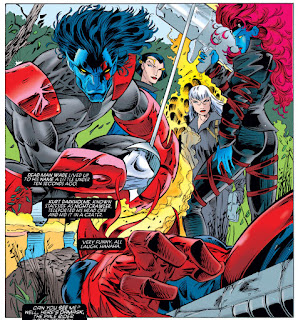 Austin's Analysis
If the conclusion to last issue somewhat surprisingly revealed that the series up to that point had been building to the creation of a superhero team after spending most of the previous issues detailing Nightcrawler's solo adventures, then this issue fails to make the most of that change in direction. The signature team moment - the defeat of the Shadow King - certainly requires the combined efforts of most of the team (Mystique is relegated to the role of "motivating the team into action"), to the point where Switchback's hyper-specific power seems laughably advantageous in the way it's perfectly suited for just the kind of attack needed to win the day, but the group doesn't really play any role in resolving the central plot of the series: convincing Destiny to leave Avalon.

She does, ultimately, agree to do so, but the only role Nightcrawler or anyone else on the "team" plays in convincing her is the indirect one of attracting Apocalypse's forces to Avalon, upending Destiny's life there and killing her son. The end result - combined with some widescreen art from Lashley that makes this a quick read - is the feeling that the series has really only reached it's halfway point instead of its conclusion. Destiny's role in the "Age of Apocalypse" endgame remains to play out, but the story of the rest of the team, so carefully constructed last issue and without having served much purpose in the series itself, is over before it ever really began.

Next Issue
Next week: another trip to the AoA past in X-Men Chronicles #2.