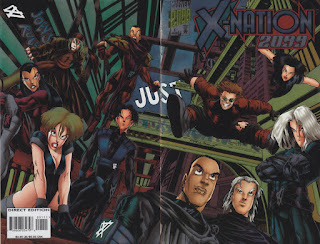 In a Nutshell
X-Nation sneaks out to a milk bar.

Plot
Wulff, trying to leave the Wild Boys gang, is rescued by Morphine Somers and brought to the Xavier Shelter for Indigent Children, where he joins X-Nation just as they're preparing to sneak out for a night on the town. Meanwhile, Avian is tasked with assembling the mutant messiah candidates for Herod, including Willow. X-Nation ends up at the Negative Zone milk bar, where Wulff, unimpressed by his new companions, leaves, only to run into the Wild Boys, looking to kill him for abandoning them. Thankfully, X-Nation comes to his rescue, and defeat the Wild Boys. After seeing the gang members arrested, X-Nation decides to head home, where an irate Sister Nicholas is waiting for them.