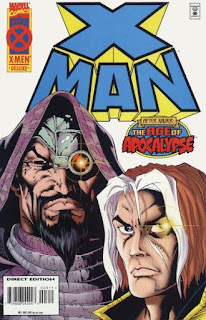 In a Nutshell
Domino & her assassins battle X-Man and his rebel group.

Plot
Forge uses a flash grenade to escape from Domino and her assassins. As Nate & Theresa rush to help out, Mastermind uses his power to make it appear as though Apocalypse has arrived. But Domino sees through the ruse and kills Mastermind. Just then, Nate flies in and angrily flings Domino into the nearby woods, following close behind her. As they fight, Toad & Caliban duel, with Toad emerging victorious only to be killed by Grizzly, who, in turn, is killed by Forge. Elsewhere, Nate uses his telepathy to make Domino relive all of her kills, before killing her himself. He returns to Forge's side and apologizes for not listening to him, telling him that Forge was right and his powers need to be deployed carefully. As Nate, Theresa & Sauron bury the dead, Forge discovers the body of Brute. Essex claims Grizzly killed him, but Forge has had enough, telling Essex that whatever he wants Nate for, Forge will fight him until his dying breath to protect the boy, something Essex is all too happy to oblige. Moments later, Nate feels Forge dying, and rushes to his side. With his last words, Forge tells Nate to find Magneto. After he's gone, Nate turns on Essex, blasting him with his power, but all it does is strip away the facade of Essex to reveal Sinister.

Firsts and Other Notables
The final page of this issue reveals that Essex was Sinister in disguise, something that was probably always pretty obvious, but which is nevertheless a chilling moment to end the issue on, as Nate clearly hadn't figured it out. 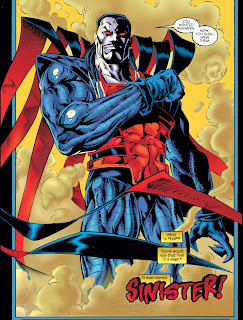 A bunch of people die in this issue! Mastermind goes first, killed by Domino. 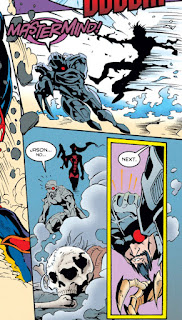 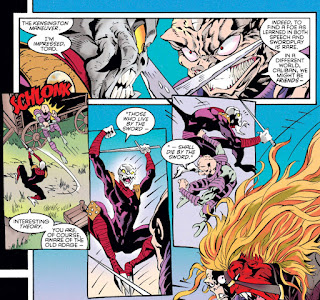 Nate basically shreds Domino’s mind, making her relive all of her kills, which ultimately kills her. 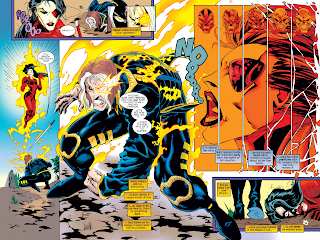 Finally, Forge is killed by Essex; with his dying words, he tells Nate to find Magneto. 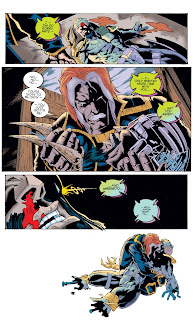 Young Love
Forge’s memories show that he had a relationship with Storm at one point. 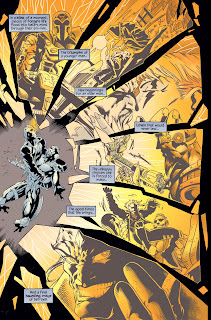 Austin's Analysis
X-Man continues to stand out from the rest of the "Age of Apocalypse" titles by telling a very Campbellian "Hero's Journey" set amidst the AoA backdrop. Here, the hero reaches the point in the cycle where he loses his mentor/Threshold Guardian, thereby motivating him to face off against the villain in the final act but also, crucially, to do so on his own, thereby completing his journey to become a hero. Equally crucial is the fact that, just before Forge is killed, Nate makes peace with him, admitting (after using his powers to destroy Domino's mind) that Forge was right to caution restraint & guide his development slowly. Not only does this add to the gut punch of Forge's death shortly thereafter, but it also helps Nate come across as more than a petulant brat whining about not being able to use his powers, making him a more well-rounded character and, ultimately, one who is more enjoyable to read about as the series heads towards its conclusion.