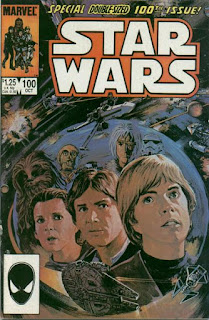 In a Nutshell
The Nagai attack the Alliance, triggering the Second Battle of Endor.

Plot
Admiral Ackbar administers a computer-based piloting exam to a group of pilots, including Han & Fenn Shysa, a test Han takes less than seriously. Later, Mon Mothma announces that a fleet of Nagai ships have been spotted near Endor. In order to spare the Ewoks from getting caught in the middle, she orders the evacuation of the base, with Lando to lead the aerial defense against the Nagai while Leia monitors the evacuation from Endor. Han & Luke, however, are grounded, having failed their exams due to the computer being unable to understand their unorthodox flying styles. Outraged, Han storms off, and learns from Tippet of strange activity the Ewoks have noticed. He & Luke investigate and discover a Nagai force already on the moon, led by Knife. They learn the aerial assault is being coordinate with information on Alliance tactics given to the Nagai by someone inside the Alliance, and race back to warn Leia and the others. However, Han falls behind and is confronted by Bey, who reveals he's the traitor in the Alliance. He gets the better of Han but is unable to kill him. Just then, Knife emerges, and attempts to kill Han himself, but Bey intervenes, seemingly killing Knife. In space, the battle is going poorly until Admiral Ackbar relays Luke's message to Lando. Abandoning all their plans, Lando leads the fleet using Han's piloting techniques, which is enough to force the Nagai ships into retreat. On the ground, Luke declares he and Han's grounding to be over; those were peace time orders. As of now, the Alliance is at war once again.

Firsts and Other Notables
This issue chronicles the Second Battle of Endor, in which the Nagai attack the Alliance and force them to evacuate their base on Endor, which has served as the central hub of their operations since Return of the Jedi.

Bey turns out to be working with the Nagai, helping to free Knife from Alliance custody and supplying the Nagai with the Alliance's battle tactics prior to the battle. He reveals that his mother was Nagai, and that, unlike the denizens of Corellia (where his father was from), the Nagai never held his half-breed heritage against him. 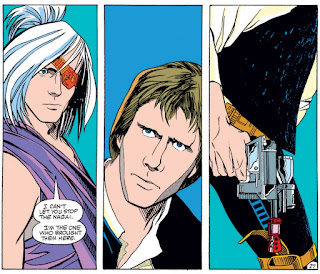 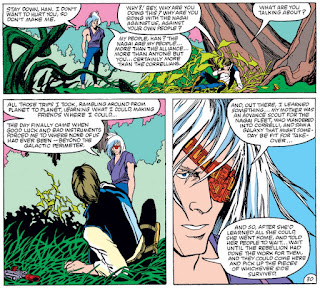 Knife is seemingly killed, after it’s revealed that he is Bey’s half brother (which, presumably, is the source of his personal hatred for Han). He will, however, be revealed to have survived Bey's shot, and will return in issue #103. 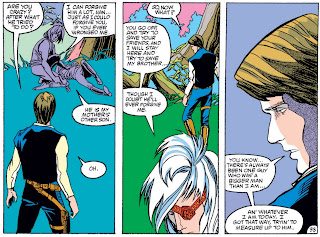 Lando is responsible for the idea of making the Alliance pilots qualify via a computer test, something he suggested as a way to stay relevant despite being pushed out by leadership, which doesn’t really make sense (if Lando and the rest are being cut out, why would leadership listen to his suggestion to test all the pilots?). 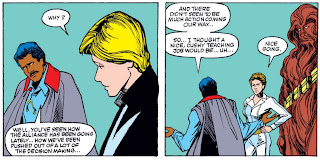 Fenn mentions his people having a score to settle with the Nagai, something we’ll presumably learn more about next issue, which contains the story that formally reintroduces Fenn. 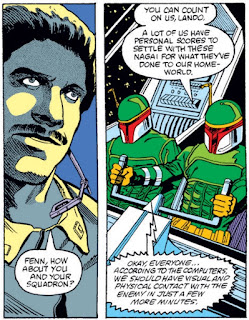 This is a double-sized issue, with former series inker Tom Palmer providing the painted cover.

A Work in Progress
More weird retroactive-but-technically-not backstory for Bey, who was apparently so famous even Luke had heard of him back on Tatooine. 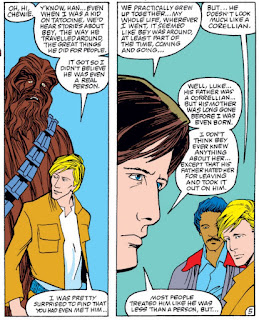 Flashbacks also show Han & Bey as boys, as well as Bey earning Corellian bloodstripes (the red dashes on Han’s pants), and losing his eyes due to some act of heroism.

The Nagai employ Maccabree soldiers, who appear as hulking metal behemoths but which turn out to be much smaller beings residing within the larger shell. 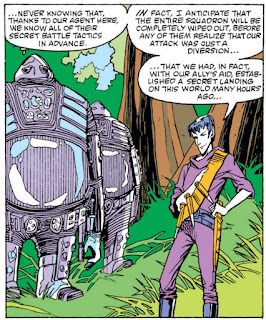 Lumiya appears briefly, flying a ship on the Nagai side of the space battle and helping coordinate the attack on the Alliance. 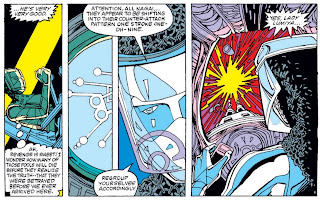 With Han grounded, Chewie & Nien Numb fly the Falcon together. 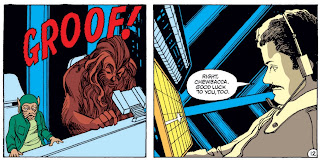 Luke seemingly puts an end (whether he has the authority to or not), to his and Han’s grounding, saying that was a peace time order, and the Alliance is once again at war. 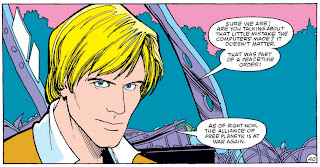 Austin's Analysis
For the most part, this is a strong, engaging issue, a suitable celebration of the series' centennial. It is, unfortunately, undone somewhat by two things that have been plaguing the series for awhile. The first is the chronological issues with Bey. When he showed up last issue with little explanation, it was easy enough to roll with; his presence in that story was minimal. This issue, though, is clearly meant to be both his showcase & a turning point for the character. The technique of reflecting a big, multi-stage battle in a personal confrontation is not, of course, a new trick (heck, Return of the Jedi does it, with Luke & Vader facing off while the Battle of Endor rages around & below them), but Duffy deploys it well here, on paper, at least, having Bey's betrayal and subsequent fight with Han ground the stakes of the battle unfolding elsewhere in something personal & direct. But while it works in theory, it lacks the necessary (and intended) emotional punch, because Bey is still a cipher of a character who has yet to be properly introduced. His relationship with Han - their longstanding bond that makes Bey's betrayal so painful - has been told to readers, but not shown, and a couple flashback pages in this issue do little to help that. It's still possible that, had the individual stories been told in their proper order, Bey's betrayal would still lack the emotional punch it's clearly intended to deliver, but there's also a better chance it would have landed better than it does here.

The second problem with this story is the handling of the supposed rift between the Alliance high command and the main characters. Duffy has, in previous issues, portrayed that inconsistently (something, like Bey's development, that probably hasn't been helped by the odd scheduling of certain stories), and it never quite rang true that Admiral Ackbar & Mon Mothma would turn their backs on the heroes of the Rebellion for the stated reasons, but never has it seen like more of a thinly-veiled plot device than in this issue. Duffy needs someone to discover the ground force of Nagai on Endor, so she dusts off the "rift" plotline to ground Han & Luke (in part because Han, despite the rift, was sent on a mission, accompanied by Admiral Ackbar, only last issue). There are plenty of other, less nonsensical ways to accomplish that without resorting to the near-farcial "computer error triggered by Lando's desire to get in good with the high command" twist here. Had the "rift" been portrayed consistently in the preceding issues, this might have worked better; instead, it just seems like a lazy bit of plotting to accomplish the necessary narrative goal of keeping Luke and especially Han out of the space battle.

But even with those two problems weighing it down, this is still an entertaining issue, one which raises the stakes of the Nagai War to the next level by bringing them into direct conflict with the Alliance, establishes another personal connection between the two sides (now both Luke & Han have a former friend fighting for the other side), and upends the post-Return of the Jedi status quo by chasing the Alliance off Endor, perhaps the most striking indication yet that Duffy intends to move the series beyond the events of the films. And of course, Cynthia Martin continues to deliver outstanding animation-esque art; where she falters in character likeness, she makes up for it in panel layouts & body language. If not weighed down by some of the flaws endemic to this era of the book, this might have been an all-time great. As it is, it's at least still pretty good.

Next Issue
At last, the first appearance of Bey.