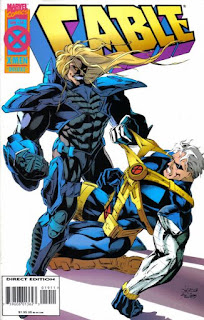 In a Nutshell
Cable's son declares himself Genesis, heir to Apocalypse.

Plot
Surrounded by the Dark Riders, Cable agrees to become Tyler's captive if he lets the rest of Cable's companions free, and the group teleports away after Cable slips Storm his X-insignia, enabling them to track him. At an old fortress of Apocalypse's, Tyler declares himself Genesis, intending to absorb the powers of the mutants captured by the Dark Riders, as well as Cable, so he can change the future. With Caliban's help, Storm & Domino find the fortress & sneak inside, confronting the Dark Riders. Their battle triggers explosions inside the fortress as Cable uses his telepathy to make Tyler feel all the regret Cable has for the turns Tyler's life has taken. With the base coming down around them, Tyler refuses to relinquish his power & teleports away, leaving Storm to pull everyone free as the fortress collapses. Cable once again mourns his lost son, while amidst the wreckage, a figure stirs.

Firsts and Other Notables
This is technically Steve Skroce's last issue on the series as its regular artist; Ian Churchill fills in on the next issue, then Skroce pencils the four "Age of Apocalypse" issues of the series as X-Man, after which he'll stay on that series as it continues even after the rest of the books revert to normal, at which point Churchill will return to Cable with issue #21 as its new regular artist.

Cable's son Tyler adopts the name "Genesis" this issue, procaliming himself the heir to Apocalypse. It's a pretty generic name, but it'll stick (in as much as Tyler himself sticks), and is used for the character's inevitable action figure.

It’s revealed here that Tyler slaughtered the people of Akkabba in the previous issue to prevent a similar slaughter from happening in the future, to which Cable more or less says “that’s not how time travel works!”.

The final page teases the return of Apocalypse; he will, of course, be back, but his return isn’t really tied to the events of this issue. 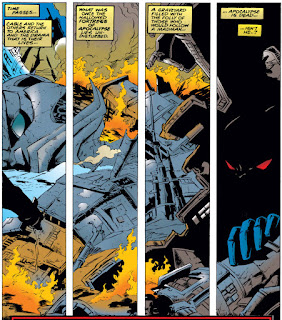 Tyler is working out of a desert fortress of Apocalypse’s, which features a big statue of his head. 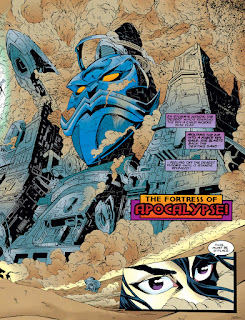 It turns out that not every mutant targeted by the Dark Riders was killed; some were held in stasis, allowing Tyler to absorb their power here. 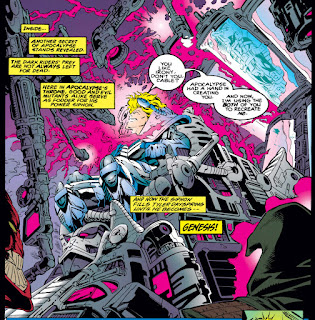 Austin's Analysis
While the previous two issues were mostly just a series of fights between the new Dark Riders & Cable’s little ad hoc group, an undercurrent to those fights was Cable starting to develop his mutant powers and rely on them more in combat. That comes into focus with this issue, as Cable ultimately draws on his telepathy - not his guns - to defeat the newly-christened Genesis. That bit of character development aside, it also helps prevent this issue from being little more than  yet another fight with the Dark Riders, even if the conclusion of the issue ultimately feels a little rushed - Cable yells at Genesis for awhile, then Apocalypse’s base starts to collapse. Combine that with the fact that the previous issue was mostly just a rehash of the first part of the story, resulting in a story that, while it does manage to advance Cable’s character forward in a believable way, also ends up feeling too long and too short at the same time.

Next Issue
Next week: Unstacking the Deck looks at Fler Ultra X-Men '95!