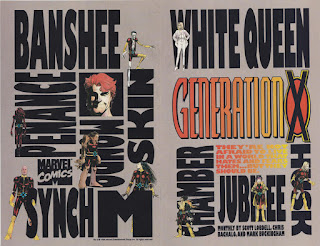 In a Nutshell
A trio of promotional books hyping Generation X.

Plot
Banshee ruminates on his new charges and co-headmaster as he takes up the reins of Xavier's School for Gifted Youngsters. After a game of volleyball, Jubilee writes Wolverine a letter sharing her thoughts about her new classmates.

Firsts and Other Notables
Opening Volley is a special promotional issue given away at the 1994 San Diego ComiCon to promote the upcoming series. It is the most like an actual comic, with an actual plot and sequential art (albeit still very exposition heavy). The Ashcan issue was, I believe, something distributed to retailers just before the launch of the regular book, and sold for $0.75. It is basically a sketchbook (with some narrative captions written from Banshee's perspective) combined with a few preview pages of issue #1's pencil art. 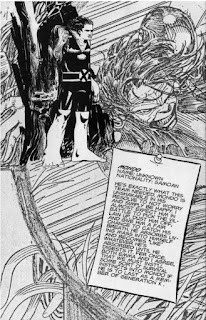 The Collector's Preview is more like a magazine (in fact, the way it is presented, it is very reminiscent of the kind of special issues being put out by Wizard magazine around this time), featuring a mixture of in-universe information pieces, creator interviews, and behind-the-scenes articles on stuff like the latest line of Toy Biz action figures and the next season of the animated series. Marvel would return to the format (and the Wizard aping) a few more times over the next few years, including the "Age of Apocalypse" Collectors Preview that will be published just a few short months after this one.

Technically, these issues represent the first appearances of Chamber, Mondo and the villainous Emplate, though the Ashcan is considered more or less out-of-continuity, while Opening Volley is said to take place between issues #11 and #12 of the regular series, presumably to account for the presence of Mondo (who won't join the team until the Generation X '95 annual), and to give Jubilee some time to develop the opinions on her classmates that she shares with Wolverine. 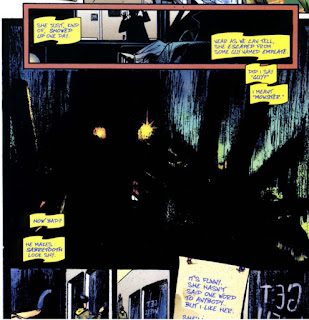 Parts of the Collectors Preview are presented in places like in-universe material given to students or potential students, which would quickly put to low Xavier’s attempts to keep his mutantcy a secret, as it speaks openly about his telepathy (as well as his leadership of the X-Men).

The Biosphere, which will be Generation X’s Danger Room with an additional organic component, is introduced in the Collector’s Preview.

Amongst the various seminars listed in the Collector's Preview available to students at the new Xavier's School for Gifted Youngsters is a business class taught by Archangel (“Lesson 1: don’t appoint your secretly-bigoted best friend to run your company while super-heroing”) and Emma (“What’s good for the bedroom is good for the boardroom.”), and a Fine Arts class taught by Beast & Stevie Hunter. 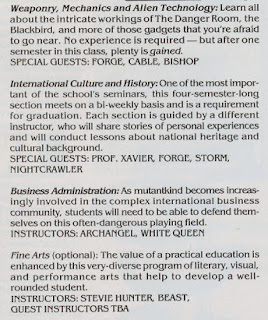 The Salem Centurion, an alumni letter for the X-Men, lists past and present students along with their majors (as though Xavier's school functions like a normal one, and not as a front for his secret paramilitary force of mutant revolutionaries). Of note: Bird-Brain, who apparently decided to major in Aeronautics during his brief stay at the mansion, Gambit's major is physical education (*wink*), Bishop's is history (cuz he's from the future!) and Changeling having an acting major despite just posing as Professor X the whole time he was there ("acting" seems to be the major of choice for characters without a clear link to a specific field of study). 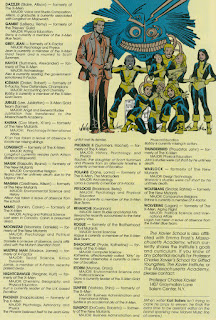 Creator Central
The credits listed above are specifically to the Opening Volley oneshot, and are taken from UncannyXMen.net's write-up of the issue (the actual issue just lists a writer/artist credit).

A Work in Progress
In the Ashcan issue, Emma is said to be from Boston, which I think is the first time that is established.

Banshee describes Chamber as a born leader, but we won’t really see that play out in the series (presumably, Lobdell was thinking of going for a natural leader/uncontrollable power Cyclops pastiche).

A power struggle between Synch & Chamber for leadership is teased, which, again, never really comes to fruition.

Penance is listed as Yugoslavian, though there’s no way Banshee could know that (and it won’t turn out to be true).

Apparently, there were plans at one point for Chamber to use a device created by Forge that would enable him to use his power to fly.

Per Opening Volley, Jubilee's favorite new teammate is Synch, and she is suspicious of Emma. 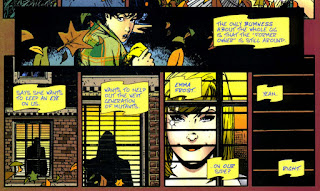 Banshee makes a note to talk to Nightcrawler about Chamber.

"In the last few years, we've seen on comic book company after the next doing their versions of the X-Men...we didn't want to set out to do another version of the X-Men. If you at the characters [in Generation X], there's no team Wolverine or Nightcrawler. They look different. What [Chris Bachalo and I] want to do is create the new team that would be ripped off for the next 10 years."

"Chamber was [Lobdell's]. He started telling me about Chamber and I thought he as completely crazy. Chamber is this guiy with a chest that explodes with energy and half his face is blown off. Once I started doing the cincept drawings, I began to think he was a really cool character. Scott also created Husk...I thought he was working for the wrong company. He should be over at Vertigo, land of the really strange characters. I came up with M. And Skin was my idea."

Austin's Analysis
While there's not a lot of plot to these issues (one is essentially a sketchbook, another features the tried-and-true "letter to home" format to comment on its characters, and the third is Marvel trying to do it's own take on Wizard), it is worth pointing out just how much of a pre-release push Marvel gave Generation X. Despite the fact that, as the latest addition to its (still) best-selling X-line, Generation X was almost guaranteed to be a sales-success, Marvel gave it a huge promotional push, laying the groundwork for the series in assorted books months before its release, then turning the annual X-crossover into, essentially, a commercial for the series, while also releasing these three issues.

Certainly, I doubt any of the diehard X-fans at the time complained about the attention and extra material (I certainly didn't), but given that we're just a few years removed from Marvel's controversial (and ultimately failed) decision to farm out the core of its Marvel Universe titles to expats Jim Lee & Rob Liefeld in an attempt to goose sales and reinvigorate what were relatively poor-performing titles via "Heroes Reborn", one has to wonder if perhaps the marketing resources (and dollars) put into ensuring that the latest X-book would be even more of a smash hit than it was already guaranteed to be couldn't have been used to generate buzz and shore up some of those lagging but venerable series that didn't feature Spider-Man or the X-Men. If they had, maybe "Heroes Reborn" wouldn't have been necessary.

The other thing interesting thing about these kinds of pre-release but still-technically canonical stories is how they differ from what later appears in the "official" debut of the characters. Lobdell & Bachalo clearly put a lot of thought into these characters and the initial setup of the series, and as a result, most of this material lines up pretty closely with what follows. With one notable exception, most of the differences are minor, stuff like Chamber never really developing the ability to fly or vying for a leadership position, or not having the full mystery of Penance and her ultimate relationship to Monet fleshed out. The big difference is Mondo, a character presented here as being as much a part of the main cast as anyone else, but who won't actually appear until issue #3, won't join the regular cast until their first annual about a year later, and will ultimately turn out to be a clone of a villain with no interest in joining the school, so clearly, whatever Lobdell & Bachalo had in mind for the character initially changed on the fly pretty quickly.