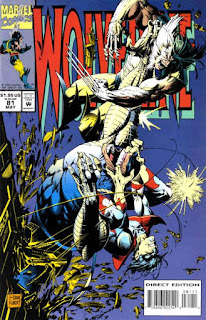 Plot
Arrving on Muir Island, Zoe Culloden helps Excalibur subdue a raving Wolverine, hallucinating from Cyber's poisons. Meanwhile, Cyber pulls himself from the ocean and commanders a speed boat, heading to Muir Island. As Excalibur debates the best way to treat Wolverine, he wakes up and attacks again, thinking everyone is Magneto. Outside, Cyber arrives on the island and knocks out the power. When Wolverine lunges at Kitty, she phases through the attack, but the shock of having almost killed her brings him to his senses. Just then, Cyber attacks Wolverine, knocking them both into a cell. Kitty rushes inside, telling Zoe to close the door. As she does, Kitty phases herself & Wolverine out of the cell, leaving Cyber trapped inside.

Firsts and Other Notables
Wolverine's broken claws (snapped by Cyber in issue #79) have started to grow back, with the healing bones depicted as shorter and more gnarled than the unbroken ones, a condition which will persist for the next few issues. 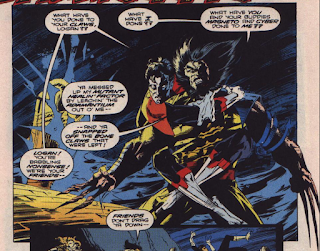 Nightcrawler notes that Wolverine's face has changed structure, gaining a more pronounced brow (something not terribly well-depicted in the art); this marks the beginning of a series of subtle physical transformations Wolverine will undergo in the months ahead as his body reacts to not having the adamantium in it anymore, reverting to a more bestial form, which will culminate in issue #100 with the emergence of the much-derided "noseless" Wolverine and the character losing much of his intelligence and speaking ability for a time. 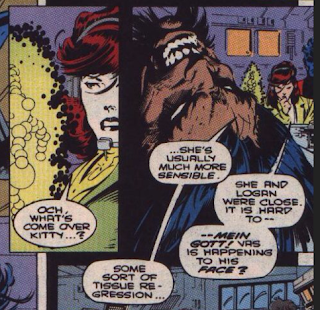 Cyber is captured on Muir Island at the end of this issue; he will next appear in issue #93, when the Dark Riders break him out as part of the first attempt to restore Wolverine's adamantium bones. 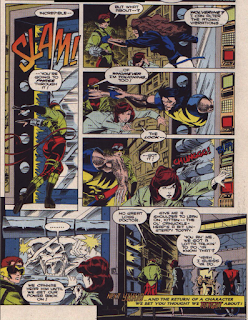 A Work in Progress
Wolverine is apparently disoriented enough by Kitty phasing through him to allow Moira to get close enough to sedate him, though it's never been established before that Kitty disorientates people when phasing through them (she just screws up electronics). 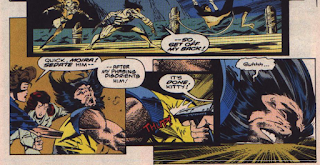 In turn, Zoe points out Wolverine's tendency to take adolescent girls under his wing (first Kitty, now Jubilee); this is probably the first place I saw that bit of characterization explicitly pointed out. 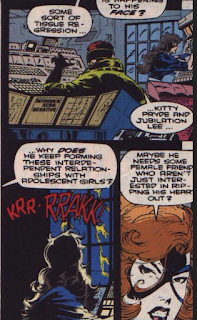 The Painscape, the spiky representation of Wolverine's mind in each memories inflict physical pain on him, used by the Weapon X project to alter his mind, appears briefly.

Artistic Achievements
There's a well rendered bit where a hallucinating Wolverine slashes through images of the important women in his life. 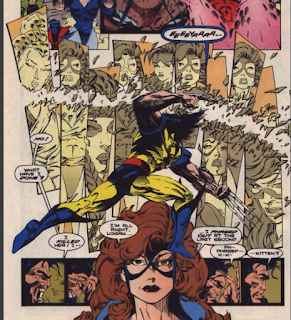 Austin's Analysis
Though the return of Adam Kubert on pencils and the presence of Nightcrawler & Shadowcat help enliven the final part of this three part "Wolverine vs. Cyber" story, those elements can't change the fact that the story is entirely one chapter too long (mostly the entirety of the previous "Wolverine & Cyber fight on the road" issue). Bringing Cyber into the Wolverine fold and making him a stop on Wolverine's "fighting old foes in his new condition" tour makes sense, but the previous encounters to that effect with Lady Deathstrike & Bloodscream worked in large part due to their relative brevity. His encounter with Cyber, meanwhile, has been stretched out over three issues, all of which hit mostly the same beats (Cyber is a raving loon, Wolverine is hallucinating). Ultimately, the introduction of Zoe Culloden will prove to be of mild significance, the breaking of the bone claws is a great "holy crap!" moment, and it's fun to see Nightcrawler & Shadowcat reacting to Wolverine's diminished capacity here, but otherwise, too much of this story feels like filler.

Next Issue
Next week: the truth about Psylocke in X-Men (vol. 2) #32, Rictor goes home in X-Force #34, and Nightcrawler batles D'Spayre in Excalibur #77.
Newer Post Older Post Home
Posted by Austin Gorton at 12:00 PM