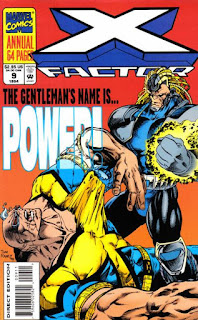 Plot
On the Astral Plane, Haven appears before Professor X, wanting to talk to him, while X-Factor arrives at a SHIELD base in DC, having been tasked to guard a large container being shipped to Idaho. Shortly after departing, an energy wave hits the truck, and the group is attacked by a pair of cyborgs. As Xavier & Haven debate the merits of her philosophy and discuss Haven's background, X-Factor defeats the cyborgs, but in the process, the container they're transporting is opened and another cyborg emerges, declaring he is Professor Power, an old enemy of Xavier's. As Haven comes to realize she'll never win Xavier over to her way of thinking, she expels him from the Astral Plane. X-Factor ultimately defeats Professor Power. In the wake of her encounter, Haven mediates on her goals, including having had her agents free Power as a means of handling Xavier.

2nd Story: Following Madrox' death, Guido attempts to clean up his former room, but is overcome with grief and guilt for not being able to help Jamie more, leading him to declare that no one is ever going to hurt his family again.

Firsts and Other Notables
After a series of "annuals as chapters of a larger story" (first linewide, then within title families) and last year's "every annual features a new character (and a trading card)" theme, the 1994 annuals are relatively gimmick free. They do, however, have a loose theme, in that they feature villains as main characters or tell their stories from a villain's point of view (some to a larger extent than others). This one attempts to meet that mandate by offering an extended look at the background of Haven as she debates the merits of her "wipe out the majority of humanity for the benefit of the survivors" approach to human/mutant relations.

This is the final X-Factor annual. Starting next year, the annuals will be "numbered" via their publication year (so "X-Men Annual '95" instead of X-Men Annual #4), and Marvel will only publish annuals for six(ish) of the soon-to-be eight regular monthly series (Uncanny, X-Men, Generation X, Wolverine and a Cable/X-Force combo, leaving out Excalibur and  X-Factor).

The notable revelation of Haven's backstory is the fact that she is not a mutant herself, rather, her powers are derived from the stillborn mutant fetus inside her, which is also the "voice" with which she communed in previous issues. Wherever DeMatteis was going with this (which is a mildly interesting idea) is unknown; Haven's next appearance (under writer Howard Mackie) will be her last, as she dies giving birth to her mutant child (who turns out to be the Adversary, of "Fall of the Mutants" fame, reborn). 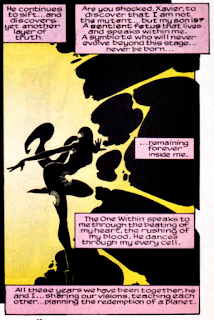 The other villain of this story, who provides an avenue for it to get in its punching quotas, is Professor Power, a pet character of DeMatteis who appeared in his Captain America, Marvel Team-Up and Defenders runs. A right wing conservative who believes peace can only be achieved through American dominance, Power (wrongly) blames Xavier for the death of his son. He last appeared in the DeMatteis-penned Spectacular Spider-Man #197-199, in which he battled Spider-Man and the original X-Men/X-Factor (a story I should probably cover as a Retro X-amination at some point). 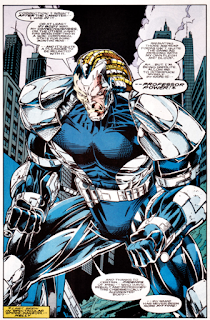 As with most annuals, this one features an assortment of pinups at the end. 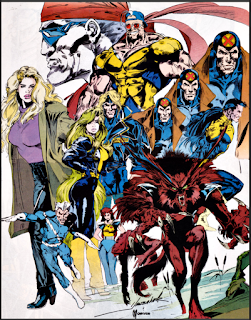 Creator Central
Matt Broome, who drew a few issues of X-Force during the transition from Greg Capullo to Tony Daniel, draws the main story in this issue. It is significantly more polished than his earlier work, possibly the result of having a more forgiving deadline or better inkers.

Chronology Corner
Professor X appears here between X-Factor #102 and X-Men #31. For X-Factor, both stories take place during issue #102, between the defeat of Commando & Avalanche and Polaris' leaving for Hawaii.

A Work in Progress
The SHIELD agent driving the truck (who turns out to be an agent of Haven), says he say X-Factor on Geraldo, which might be a reference to the previous annual, in which Polaris & Strong Guy appeared on a talk show, though that was Donahue. 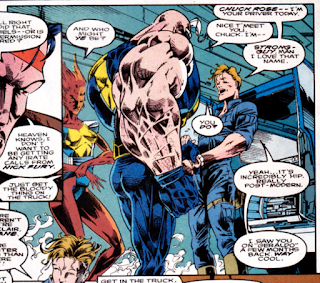 For what it's worth, this issue establishes that Wolfsbane can't drive.

Polaris appears in the issue after Professor Power reveals himself, with Forge having asked her to delay her trip to Hawaii in order to hang in reserve in case she was needed; she is shown heading to Hawaii after the events of this story in issue #102. 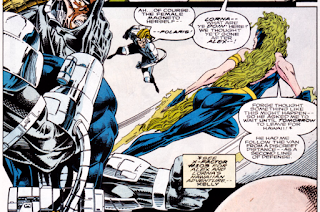 The Reference Section
Strong Guy is particularly reference-heady this issue. He declares that SHIELD isn't UNCLE, compares someone to Shannon Doherty's press agent, and refers to Professor Power as a Babylon 5 reject.

Human/Mutant Relations
SHIELD agents Daniels, who is in charge of the operation to relocate Professor Power's son's body, is unabashedly anti-mutant throughout the issue, slinging slurs and disparaging X-Factor every chance she gets. 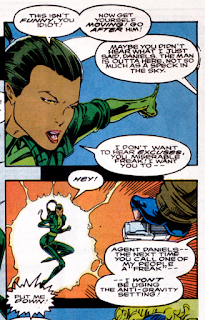 Austin's Analysis
On the surface, the A-story of this annual is probably meant to be the Haven/Xavier plot. It fits the '94 annuals' loose theme of "villain-focused", provides some additional background on Haven, and pits her against the founder of the X-Men and the philosophical opponent of her approach to human/mutant relations. DeMatteis clearly wants Haven to be X-Factor's Big Bad, and coming on the heels of her role in Madrox' death, this lays a lot of that groundwork. Unfortunately, in hindsight, we know this isn't going anywhere. This is Haven's penultimate appearance, and she's more or less unceremoniously killed off by the next writer's Big Bad in her final appearance. So it's hard to care too much about this, despite the intriguing ideas of Haven simply being the vessel for a mutant fetus, and the way she's so desperate for Xavier's approval of her mission despite its goal being morally anathema to him.

That leaves the B-story, which is much more of a traditional slugfest. The use of Professor Power arguably ties in with the Haven/Xavier material (given how both villains are obsessed with Xavier), but it really just feels like DeMatteis saw an opening to use one of his pet characters and took it. The end result is fine, with Broome's art stronger here than on his X-Force fill-ins. It's still very 90s and skimpy on the backgrounds, but there's occasional shades of Stroman & even Quesada in some of the panels and figures, and the fight with Power makes good use of the various characters involved. But it's pretty clear that the Haven stuff is meant to be the big draw, and the later circumstances of the character prevent that from happening, leaving little but a routine if harmless annual.