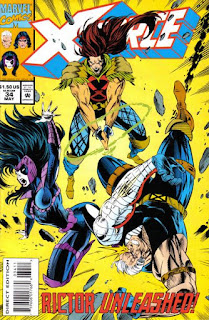 In a Nutshell
In the wake of "Child's Play", Rictor goes home.

Plot
In the wake of the Gamesmaster's defeat, Moonstar reveals she is in fact Dani Moonstar, former New Mutant, then departs, with X-Force unwilling to try and force her to stay with them. Outside, Magma breaks things off with Empath, who leaves himself, and Warpath tells Magma X-Force can drop her off in England on their way home, as she hopes to search for her family. Meanwhile, Shatterstar shows Rictor a news report that his uncle & cousin were shot in a gunfight with Mexican police, prompting Rictor to reluctantly return home. Later, he is reunited with his family, but remains disgusted by their involvement in the illegal gun trade, while Cable's presence draws attention due to his physical similarity to Stryfe, who killed Rictor's father, triggering a fight. But Rictor uses his power to defuse the situation, then visits his cousin in the hospital, telling him he belongs in prison. When his cousin accuses him of being too good for his family now, Rictor admits he's not, but that he's trying to be.

Firsts and Other Notables
Not that it was ever a terribly well-disguised secret, but this issue confirms that the mysterious Moonstar is in fact Dani...Moonstar, the former New Mutant known, at times, as Psyche & Mirage, who was last seen leaving the team to stay in Asgard as one of the Valkyrie in New Mutants #86. She parts, if not on friendly terms, than at least an uneasy truce with X-Force in this issue, saying her involvement with the new MLF is complicated (it will eventually be revealed that she is working undercover for SHIELD to infiltrate the group). 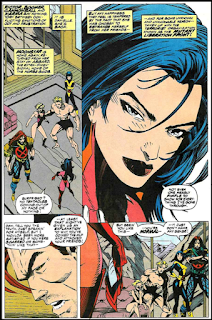 Magma declines to remain with X-Force or return to Nova Roma, instead deciding to go to England to further investigate her past (this coming after the "Nova Roma was actually a bunch of British people brainwashed into thinking they were descendants of a Roman colony in the Amazon" retcon), and thus disappearing back into comic book limbo, where she'll remain until issue #87 of this series (when she returns as part of the antagonistic New Hellions group, nothing having come of this whole "go to England, find my family thing"). 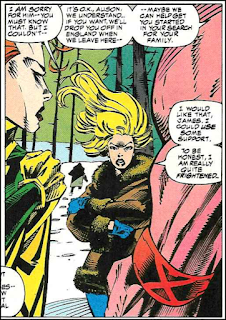 In the process, she effectively breaks up with Empath (who had been with her in Nova Roma), in the process dropping him even deeper into comic book limbo; he won't appear again until X-Treme X-Men #34 in 2003, when he randomly pops up working for the Los Angeles branch of X-Corp under Sunspot. 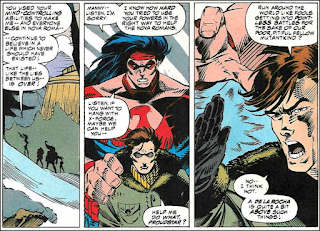 Karma technically appears in this issue, but doesn't receive any dialogue (she appears amongst the other former New Mutants during the "interrogate Moonstar" scenes), and will disappear without explanation between issues, next appearing in the '97 Beast limited series (which is, of all places, where her long gestating "find my missing siblings" plotline finally comes to a close).

For anyone looking for any retroactive setup to the future Shatterstar/Rictor relationship, this issue reveals that Shatterstar has learned Spanish in order for him and Rictor to be able to communicate exclusively amongst themselves, which he offers as both a useful battle technique and an aid to allow them to talk openly about more private, personal things. 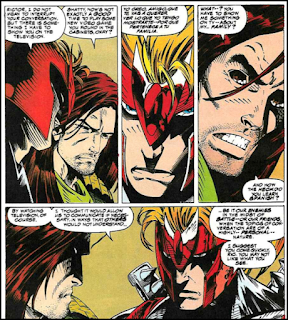 It's said that Rictor left home (presumably shortly before he was kidnapped by the Right, where he was when he first appeared in X-Factor #17) three years ago, which is interesting mostly because in this same publication month, in X-Men #32, written by the same writer, it is said that Spiral implanted bionic eyes in Psylocke "months ago", something which happened prior to New Mutants Annual #2, an issue which was published before Rictor's first appearance.

There's a genuinely funny bit where, in the aftermath of "Child's Play", Paige insists she can't just go back to the Guthrie farm, and needs to be trained in the use of her powers. When Cable admits he may not be up to snuff in that department, Paige is like, "um, yeah, I want to be trained by Professor X, not you." 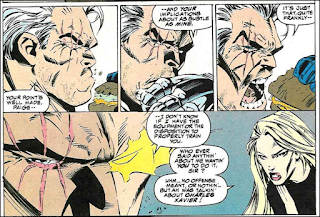 There's also an unintentionally funny bit where, as Rictor is inside talking to his mother, his family spots Cable & Domino, who accompanied him home, waiting outside. Seeing the face of the person they believe killed Rictor's father, they confront him, with Cable declaring things are about to get ugly. Like, dur, maybe the person who looks exactly like someone who killed a member of his family wasn't the best person to accompany Rictor home, especially because there's no other good reason for Cable to be there (other than as an excuse to introduce a little tension/conflict into the back half of the issue). 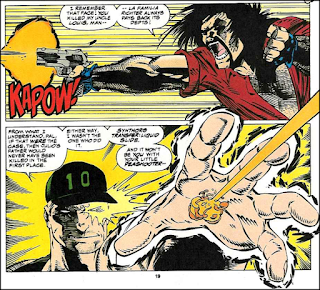 A Work in Progress
Issue #30 established that in the future Mojoworld from which Shatterstar hails, he and his "wife" were matched to provide DNA for future offpsring. Here, it's confirmed that Shatterstar was conceived the same way, having no parents and being born via a fertilization chamber.

Stryfe's attack on Rictor's father (committed without his helmet, which led to Rictor believing Cable killed his father, the source of the tension between them during the closing issues of New Mutants), is depicted in more detail in this issue. 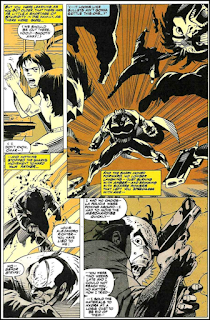 The issue ends with Rictor declaring that his brain is his new weapon; ultimately, it's more a thematic closing note for this issue (since he comes from a family of gun runners), rather than the start of a new direction for the character where he dedicates himself to getting smarter or something like that. 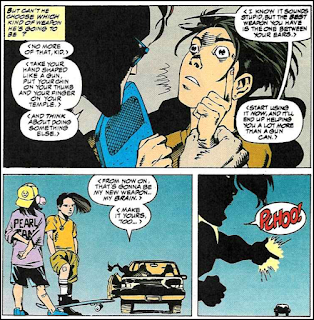 The Grim 'n' Gritty 90s
Domino, waiting outside as Rictor goes in to reunite with his family, is careful to strike a "sexy 90s" pose, with her back to the "camera", a rip in her jeans just below one of her butt cheeks, while looking over shoulder. 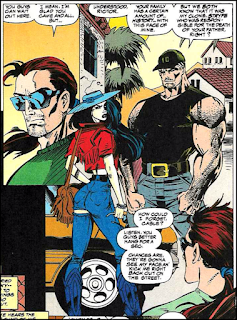 It's in the Mail
In this issue's letter column, the second Deadpool miniseries is mentioned. And, for the first time (I believe), the question of whether Adam-X (who is, don't forget, the X-Treme) is the third Summers brother alluded to in X-Men #23, is raised (which was Nicieza's original intent).

Austin's Analysis
This isn't quite a "post-crossover quiet issue" as they've come to be known, but it is definitely a quieter, more character-driven issue dealing, in large part, with the aftermath of "Child's Play" before pivoting into a smaller "Rictor goes home" tale. And while Tony Daniel really doesn't have the chops for this kind of introspective storytelling, this continues to show off Nicieza's skills in that area. The front half, a super-awkward New Mutants & Hellions reunion, is stronger than the second (in part because of the curious decision to send Cable to Mexico with Rictor, and also because it's never quite clear what sparks Rictor's epiphany to bid goodbye to his family once and for all), but all the character beats, from the Cannonball/Moonstar discussion, to Warpath offering aid to his former teammate Empath, to the growing bond between Rictor & Shatterstar, are well executed.

It is, however unfortunate how quickly Nicieza jettisons the re-assembled former New Mutants. One of the best things "Child's Play" had going for it was the way it served as a sort of culmination of Nicieza's efforts to make X-Force more of a "New Mutants Graduates" book, but here he quickly writes out all those old faces (with poor Karma not even getting a line of dialogue). It's possible he had (ultimately stymied) plans for Magma or Empath, and Moonstar will return shortly, but it's still a shame none of these characters stuck around a little longer, or, in the case of Karma, were given any explanation at all as to what they were going to do next.