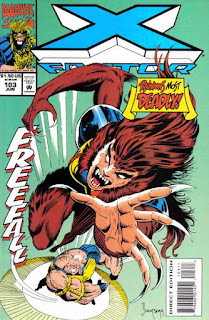 In a Nutshell
Polaris joins Havok in Hawaii while Wolfsbane joins Strong Guy on a visit home.

Plot
Hitching a ride with Random, Strong Guy & Wolfsbane arrive at the upstate New York home of Strong Guy's aunt & uncle. Meanwhile, Polaris joins Havok in Hawaii, though the the couple is being unknowingly watched by a Malice-possessed Beatrice Connors. Back in New York, Wolfsbane is charmed by Strong Guy's family, while Val Cooper testifies at the Pentagon that Madrox' death was caused by Haven, not the Legacy Virus. In Hawaii, Polaris helps Havok get over his guilt for Madrox' death, while in New York, Strong Guy & Wolfsbane explore the town, meeting people from Strong Guy's past. In Hawaii, Havok is confronted by Connors, while in New York, Wolfsbane suddenly senses that he's in trouble, but Strong Guy reminds her they are no longer psychically bonded. However, when Polaris approaches Havok, she is shocked to discover he has been taken over by Malice!

Firsts and Other Notables
This marks the beginning of Todd DeZago's short tenure as the scripter of the book. He will be onboard up to "Age of Apocalypse", working first off J.M. DeMatteis' plots and then John Francis Moore's (while handling both plotting & scripting duties on issue #107).

Val Cooper testifies at the Pentagon that Madrox died at Haven's hands, downplaying reports of his illness beforehand, in an effort to keep word of the Legacy Virus from leaking out  (ultimately, public knowledge of the virus will become one of the turns the plotline takes before moving more to the backburner of things). 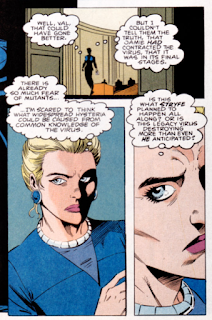 Upon being possessed by Malice, Wolfsbane senses Havok's distress, despite, as Guido points out, the fact that Haven broke their psychic bond; I honestly don't recall if this goes anywhere (but suspect it doesn't, as Wolfsbane will soon be leaving the series for Excalibur). 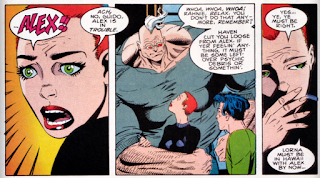 I have no idea if The Body Thief is a real book (I mean, it's a generic enough title that I'm sure some book out there exists with it, but I can't recall a particularly notable example offhand), but that's what the Malice-possessed Beatrice Connors is seen reading on the beach, in a fun little sight gag.

A Work in Progress
In perhaps the most egregious example yet of shoehorning Random into a story, Strong Guy & Wolfsbane hitch a ride with him to visit Strong Guy's family after learning he was heading to Albany. This leads to a now-typical exchange in which Random gruffly rebukes the offer to stay with Guido's family for awhile, only to then depict him watching the scene with longing while standing out in the cold. 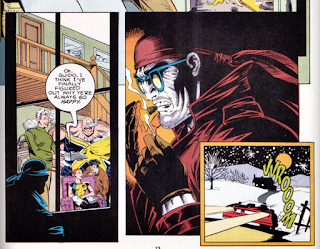 It's noted that X-Factor's uniforms, made of unstable molecules, protect the wearers against the cold (which has long been a staple of the Forge-made uniforms. Of course, Guido's arms are bare even while wearing his uniform, so you think he'd still be cold (ditto their heads, etc.). 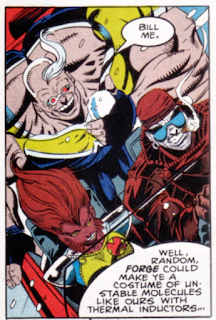 Havok wonders if his guilt over Madrox' death is what Cyclop's felt after Thunderbird died. 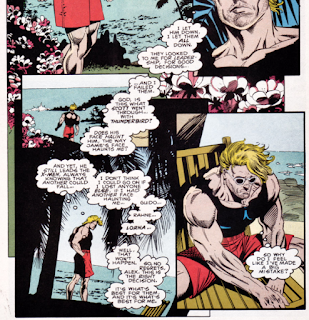 Points to DeMatteis for remembering that, at one point in time, Havok & Polaris left the X-Men to study geology and were working in that field before getting sucked back into the life of the X-Men just prior to the Outback Era.

It's in the Mail
The upcoming "Life Signs" sub-crossover (within the larger "Phalanx Covenant" storyline) with X-Force & Excalibur is mentioned in the letters page.

Austin's Analysis
While this technically advances the Malice/"Attack on Polaris" plotline - with the Malice-possessed Beatrice Connors trailing her to Hawaii before possessing Havok in the issue-ending cliffhanger - it's really another quiet, character-centric issue. Polaris helps Havok get over the loss of Madrox, while Strong Guy and Wolfsbane visit Strong Guy's family. It's all the type of solid character work we've come to expect from DeMatteis (who continues to get great dividends from the Guido/Rahne pairing), but at the same time, it remains tough to get very excited about much of this. Much of DeMatteis' run has featured this kind of solid, dependable writing, backed by solid, dependable artwork, which is a benchmark far too few series were hitting at this time, but very little of it manages to break out of that average to become truly memorable or have much impact. For all that this era of comics led to extremes, either in terms of massive trainwrecks or surprise gems that managed to rise above the trends, X-Factor post-Peter David has managed to remain remarkably even-keeled and under the radar. Which is a shame, because DeMatteis & Duursema are doing some good work here. It's just that very little of it lingers, good or bad, past the reading of it.