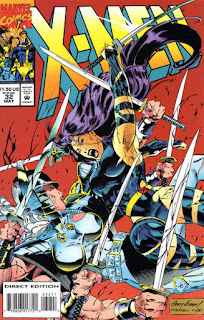 "Soul Possessions Part Two: The Leopard and the Cats"
May 1994

In a Nutshell
The truth about Psylocke & Revanche is revealed

Plot
Psylocke & Archangel, soon joined by the rest of the X-Men, battle Spiral, who drops some cryptic words to Psylocke before dancing away. Deciphering Spiral's words, Beast & Banshee manage to access the memory banks of Revanche's bionic eyes, allowing Psylocke to watch how Spiral helped Matsuo and the Hand meld her mind with Kwannon's, creating two women who are each a part of the other. Psylocke then tracks down Matsuo, who has killed Lord Nyoirin and, in the wake of Revanche's death, intends to die himself. But Psylocke convinces him to honor Revanche's death by choosing to live. She then returns to the X-Mansion and with Archangel at her side, tosses the bionic eyes into the lake, declaring that she has met the challenge to her identity posed by Revanche, and became a better, stronger person for it.

Firsts and Other Notables
With this issue, the retcon to Nicieza's Psylocke retcon is completed. Here is the official gist, as of this issue (which has more or less remained intact over the years): after British Psylocke emerged from the Siege Perilous a blank slate and was found by Matsuo, Matsuo saw an opportunity to save the life of his injured, brain-damaged lover, the Asian assassin Kwannon, by putting Kwannon's mind into Psylocke's body. To this end, he enlisted the aid of Spiral to assist the Hand, and unbeknownst to him, Spiral didn't just swap the womens' minds, she mingled them, along with their genetic material, such that each would possess some of the memories & skills of the others, and be, on a genetic level, similar, despite their outward physical differences. After the transformation, Asian Psylocke was brainwashed into serving the Mandarin, while British Kwannon was taken by Lord Nyoirin (her former employer/lover), nursed back to health, and set against Psylocke & the X-Men. 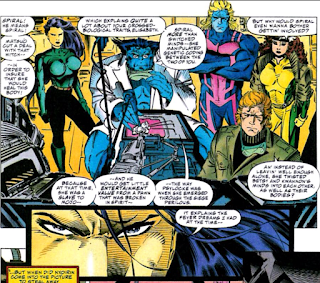 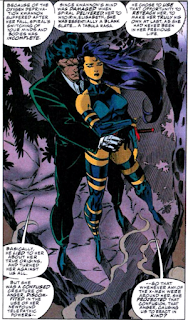 It's sad that pre-transformation, Kwannon possessed some low-level telepathic abilities, which is what made the mind transferring possible in the first place. 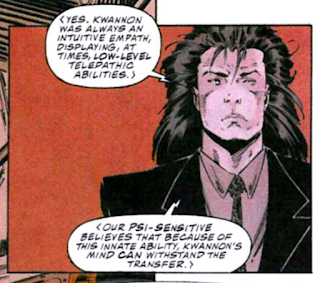 Matsuo also tells Psylocke that Revanche was subconsciously sharing her angry & frustration with the X-Men whenever she was around them, making them feel the same way, and it was only when her telepathic abilities were amplified by the Legacy Virus that she was able to penetrate the fog in her own mind and realize the truth about her relationship with Psylocke, explaining why she suddenly left the team when she did last issue, and how she suddenly knew things about their transformation that she didn't when she first came to the X-Men.

Upon learning that Spiral messed with her DNA as well, Psylocke says it explains the "fever dreams" she experienced during the process (ie the bulk of Uncanny #256, which found her physically transforming as she relived memories peppered with appearances by/allusions to Mojo & Spiral).

It's said that Lord Nyoirin sent Revanche against the X-Men (as seen in her earliest appearances) to extract revenge on behalf of his patron, the Mandarin, for Wolverine & Psylocke foiling his plans during "Acts of Vengeance". 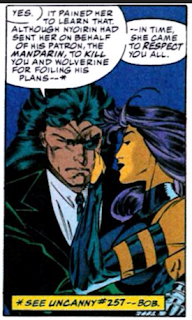 The letters page of this issue runs a brief editorial eulogizing the recently-departed Jack Kirby (who died in February of 1994). It's somewhat odd that it runs in this series, and not Uncanny (since Jack actually co-created that series), though it's probably just a matter of this month's Uncanny issue not having a letters page while this one does (then again, you think they probably could have made room in Uncanny #312, or done something else to honor Kirby there).

Before her death, Revanche transferred her memories to Matsuo, who in turn gives them to Psylocke. Putting aside the dubious (even by comic book standards) science behind this, it's basically Nicieza's way of not having to worry whether Psylocke would have been privy to knowing something Revanche knew going forward. 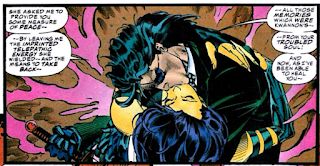 For what it's worth, Lord Nyoirin is killed this issue. Created seemingly just to help advance Nicieza's original Psylocke retcon, with that retcon retconned in turn, the character became functionally useless, presumably leading to his death. 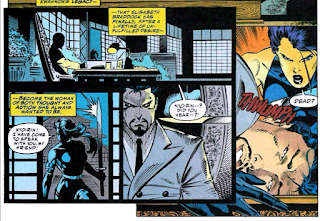 The ending of this issue is somewhat awkward & uncomfortable, given that Psylocke talks Matsuo out of killing himself. Matsuo who, aside from orchestrating, at least in part, everything Psylocke has just been dealing with (including her time spent as the Mandarin's brainwashed personal assassin), also killed Mariko Yashida. Maybe Psylocke just wants him alive so Wolverine can continue cutting bits off of him every year on the anniversary of Mariko's death? Either way, this marks Matsuo's last appearance for the next few years (he next appears in Wolverine #127). 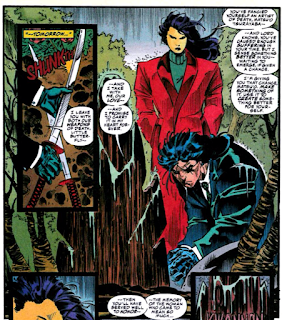 Finally, I dropped the ball in the previous issue by failing to note it was the first issue of the series to be digitally colored, allowing for a greater depth & breadth of colors to be used, as Marvel attempts to keep up with Image (whose books were already using digital coloring). The technology used by Digital Chameleon to color these issues will soon become the industry standard, with digital coloring on the whole leading, in turn, to the books being printed on higher quality paper (to better present the improved colors) which, in turn, raises the price of individual issues, which, arguably, is a contributing factor to the decline in sales of comics following the burst of the speculator boom, as individual issues, already steadily increasing in price, become harder to sell as impulse buys.

A Work in Progress
Nicieza name-checks Slaymaster, the villain who blinded Psylocke (thus causing her to need the bionic eyes), a relatively deep continuity cut considering the villain only ever appealed in the UK Captain Britain series.

For what its worth, it's established here that X-Factor filled in the X-Men about what they learned about Spiral (ie that she's Ricochet Rita) in X-Factor Annual #7.

It's said at the time of Psylocke's transformation that Spiral implanted Psylocke's bionic eyes "months ago", meaning the entirety of events from New Mutants Annual #2 up to the present (including "Fall of the Mutants", "Inferno", "X-Tinction Agenda", the '91 relaunch, "X-Cutioner's Song" and "Fatal Attractions", as well as all the stories in between) happened in months. Which, even given the sliding timescale, seems way, way too compressed, to the point where it would best to just not think about it.

In another relatively deep continuity nod, Beast refers to Banshee (who it should be noted is still hanging around the mansion) as an electronics whiz, a callback to the early "All New, All Different" days when Banshee could be found working on the X-Men's jets. 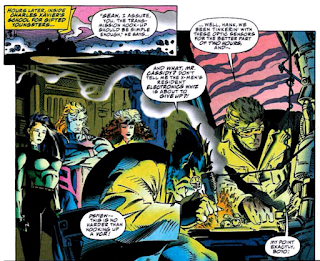 Following on from Xavier putting Beast in charge of mansion operations last issue, and his edict not to smoke inside the mansion, Gambit is seen smoking on the front porch despite the cold. 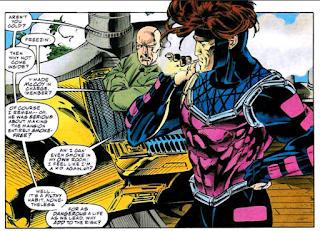 He also notes that both Rogue & Belladonna have said the same thing to him regarding his smoking habit, in more setup for the Rogue miniseries. 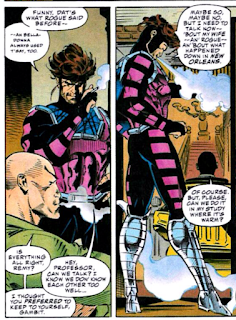 Claremontisms
Psylocke's psychic knife is referred to as "the ultimate physical expression" of her power.

After Gambit corners Spiral, he declares "bang, you dead". 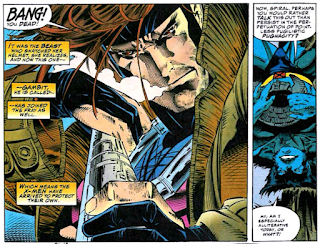 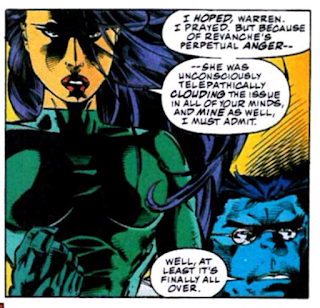 Young Love
This issue ends with Psylocke & Archangel more or less walking off into the sunset, with both declaring they are stronger for their physical transformations, eager to see what kind of lives they can have together. 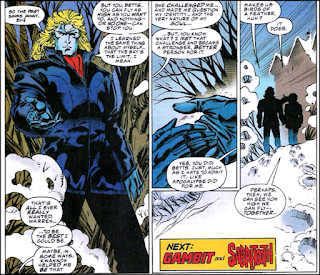 It's in the Mail
This issue gets a two-page Letters Page; the upcoming Rogue miniseries is teased.

Austin's Analysis
As a story, there's not a whole lot to this issue. After a brief (somewhat cramped) fight with Spiral, the bulk of the issue is the X-Men watching a flashback (via Revanche's bionic eyes), followed by Psylocke caring entirely too much about keeping Matsuo alive. But it does a pretty effective job of finishing off the retcon to Nicieza's previous retcon, closing the loop on his initial Revanche story, completing the writing-out of that character, and, arguably, leaving Psylocke as a character in a better place than she started.

It is, however, debatable if all of this was worth the time - both the initial three issue Revanche introduction/initial retcon story, and this two-parter to clear up the holes created by that previous one - or if it does indeed leave Psylocke in a better place than before. Revanche, ultimately, is a nothing of a character - a vehicle to alter the circumstances of Psylocke's transformation, a minor footnote in what becomes an overlong Legacy Virus plotline. Is "body swapped with an Asian ninja assassin, with Spiral blending their minds together" all that better than "physically transformed into an Asian woman by Spiral and brainwashed by the Hand"? Probably; it replaces some of the awkward cultural appropriation issues tied to Claremont's body transformation trope with a more traditional comic book-y "body swap" trope, and that's to the character's benefit, just in terms of making her basic schtick easier to spitball to new fans or summarize on the back of trading cards and whatnot.

Of course, in terms of issues handed over to the story, it would have been best if this whole retcon had been laid out just in the initial three part story which introduced Revanche, as Nicieza clearly intended. Chalk up the existence of the story in this issue and the last, then, to incomplete research and sloppy editorial oversight. But Nicieza deserves credit for working quickly to clean up his mistake, and with these two issues, he does his best to make what is essentially a continuity patch entertaining. He uses it to explore & deepen the nascent Psylocke/Archangel romance & further some additional subplots, and the success of these last two issues is aided in large part by some strong Andy Kubert art and the even stronger digital coloring, which really enlivens what could have very easily been a fairly dull story.