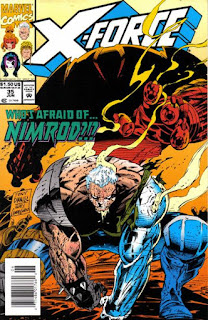 Plot
As Domino & Shatterstar infiltrate Strong Industries to acquire an artificial intelligence chip in development there, Rictor & Warpath tail a scientist working on the project in order to obtain copies of documents involving his work. Cable, worried the US government is taking a step closer to initiating full scale mutant genocide, brings the evidence to Forge and acquires intel on the government's Sentinel base at Camp Hayden. Later, Siryn meets with Banshee and asks him for information about Nimrod. At the Guthrie farm, Paige insists to her brother that she intends to attend Xavier's School. At Camp Verde, Cable briefs the rest of X-Force on their mission to infiltrate Camp Hayden and put a stop to whatever artificial intelligence is being developed there. Using uncharacteristic stealth, their attack goes well until the AI activates itself and proceeds to easily defeat the team in the form of a rebuilt Nimrod.

Firsts and Other Notables
This issue introduces a new-look Nimrod, replacing the slick silver & purple model with a more hulking, geometric red one. A recap of Nimrod's history in this issue suggests this Nimrod is the same one which was last seen getting sucked into the Siege Perilous alongside Master Mold in Uncanny X-Men #247. However, it will eventually be revealed that this is an entirely new model of the robot, the result of the original Nimrod downloading his program into the government computer network before going into the Siege Perilous, which then created a new body for itself once technology sufficiently caught up (the original Nimrod, meanwhile, will eventually turn out to be Bastion, villain behind the "Operation: Zero Tolerance" crossover, who was fused with Master Mold before being spit out of the Siege Perilous). As a result, this particular iteration of a"boxy red" Nimrod more or less never gets referenced outside this story (though it does get its own action figure). 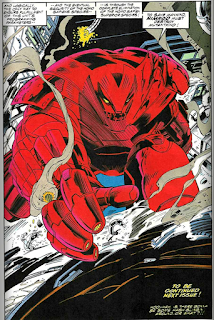 Domino & Shatterstar encounter Martin Henry Strong, the "mutant fishman in a muscular black man's body" from X-Force Annual #2, inside his research facility where one of the Nimrod components is being developed. In another instance of X-Force being the "dirty work" X-team, Cable meets with Forge to share intel on the Nimrod project and discuss X-Factor's dealings with Project: Wideawake in X-Factor #92 (it's also another case of Cable expressing seemingly-uncharacteristically fancy taste in food & clothing). 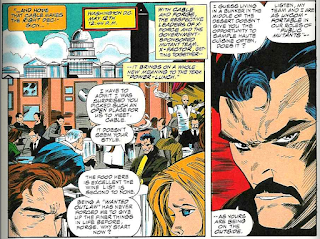 Warpath suggests that the massacre of his tribe (by, he believes, the Hellfire Club), which led him to join the New Mutants shortly before they became X-Force, occurred a year ago, which means Nicieza (or his editor) isn't even bothering to make his own timeline consistent (as X-Men #32 suggested all events since Psylocke's US debut in New Mutants Annual #2 happened "months ago", which is directly contradicted by setting, essentially, the entirety of X-Force thus far within a year. 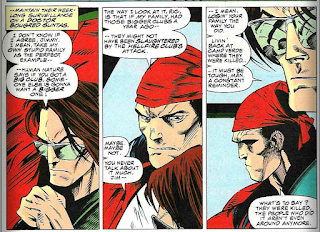 The Chronology Corner
Forge appears in this issue between his appearances in X-Men Unlimited #4 and #5, which fall between issues #102/Annual #9 and #106.

A Work in Progress
The hyper specific date/time captions, once a hallmark of this series, are back in this issue.

The discs with info from the X-Men database which Warpath & Siryn stole from the X-Mansion in issue #19 are referenced, as Banshee tells Siryn Xavier was well aware of the theft (something we - and Cannonball - were already aware of). They are also meeting on the grounds of the Massachusetts Academy, for more Generation X setup, and Banshee more or less accepts Siryn's involvement with X-Force. 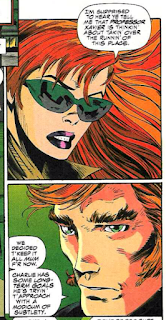 We see the tail end of the "Turns out I'm an immortal mutant" conversation between Sam and his sister Paige in this issue. 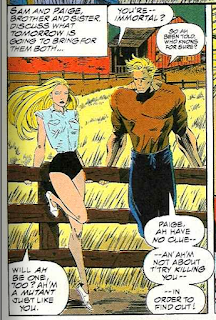 As Paige insists she wants to go to Xavier's school to be trained, Cannonball points out it's really not much of a school anymore, to which Paige counters that perhaps that's because nobody has enrolled of late, for yet more Generation X setup. 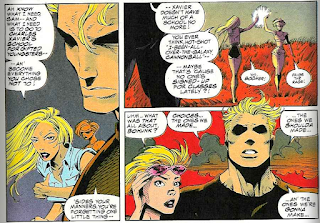 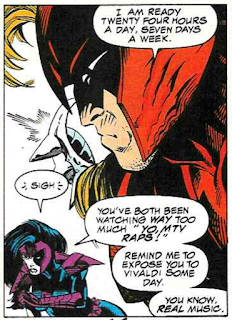 After taking pictures of some government docs with some Cable-tech, Rictor jokes about finding a Fotomat to develop them. 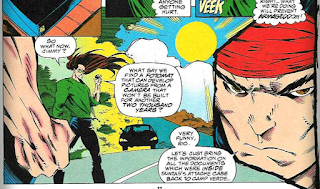 Nimrod's history is depicted via that weird (and ugly/hard to see) negative effect that was apparently all the rage in 1993-94 (it was also used prominently in the various X-Men/Avengers 30th Anniversary ads. 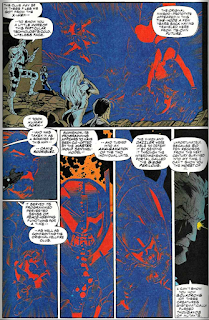 Artistic Achievements
The extent to which Cable's shirt is damaged during the closing fight with Nimrod changes from page to page.

To the EXTREME!
Infiltrating the potential Sentinel research facility, Domino tells Shatterstar to go easy and not start killing people. 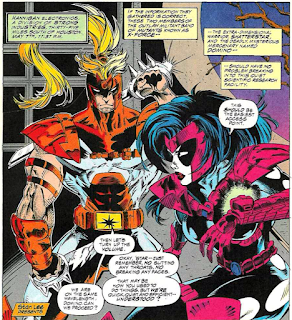 Prepping for the mission to takeout Nimrod, Cable gives X-Force the option to back out, and insists that when they do go in, it will be sneakily and quietly. 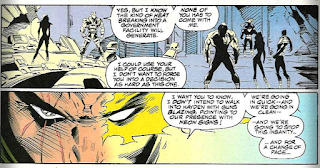 Human/Mutant Relations
One of the scientists working on Nimrod argues that humans wouldn’t need to build sentinels if mutants weren’t giving them valid reasons to do so.

It's in the Mail
A response to a letter in this issue explicitly declares that Paige will be part of the cast in the new Generation X, the first time that's directly mentioned in one of the books (I believe it was widely known already amongst fans thanks to stuff like Wizard, though).

Austin's Analysis
"Slow burn" isn't usually used to describe the (theoretically, at least) high-octane, take-no-prisoners X-Force, but this issue does a great job of building up to its last page reveal of Nimrod. Page by page, the looming threat is teased and developed, with just enough hints of where things are headed to inspire dread. It's some great moody writing from Nicieza, aided by some stronger-than-usual work from Tony Daniel (whose work, despite apparently every professional inker working at Marvel contributing, somehow looks more polished here than in previous issues). Of course, in the grand convoluted scheme of Nimrod's history, this narrative road populated by a bulky red version of the robot will ultimately prove to be a short one, mostly ignored by later stories involving the character. But at the moment, this issues makes for a tense, well-crafted build-up in a story that highlights what makes X-Force unique amongst the X-books by actually having them proactively seek out a threat against mutants and attempt to neutralize it.