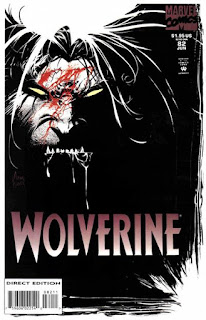 Plot
Wolverine lights incense at Mariko's tomb on the anniversary of her death. Outside, a group of hand ninjas wait to attack him, but Yukio convinces them that, since Wolverine lacks his healing factor & adamantium claws, he couldn't possibly be the Wolverine they are after. In Canada, Bloodscream discovers the inert Elsie-Dee. Reviving her, she proceeds to revive Albert, while Bloodscream lies to her, proclaiming himself a friend of Wolverine's. On Muir Island, Moira MacTaggert is concerned about Wolverine's physical regression, but Zoe Culloden leaves the island, declaring she has some ideas on how to address it. In Japan, Wolverine poses as a social worker to interview the abusive foster parents of his foster daughter Amiko. That night, donning his X-Men uniform, he removes her from the home and brings her to Yukio. He then cuts a deal with Silver Samurai: in exchange for the Honor Sword of Clan Yashida, Silver Samurai will ensure the Japanese child welfare authorities accept Yukio as Amiko's new guardian.

Firsts and Other Notables
Wolverine is in Japan in part to pay his respects on the anniversary of Mariko's death (meaning that, at least as far as Hama is concerned, it's been one year since issue #57). Also, it's worth noting that despite swearing to find Matsuo on the anniversary of Mariko's death every year and cutting off another piece of him, we receive no indication of that here (presumably because Wolverine is feeling so underpowered at the moment). One of the Hand ninjas calls out Wolverine having maimed their leader, but that's meant to be a reference to the hand-cutting-off in issue #57. 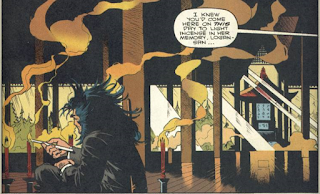 However, a flashback story in issue #175 will reveal that Wolverine did indeed visit Matsuo between last issue and this one, and it is that more recent attack on Matsuo that the Hand is attempting to avenge here. So technically (at least, retroactively) Wolverine has been keeping to his vow.

As promised in Uncanny X-Men #313, Yukio has returned to Japan from New York in time to appear in this issue, help Wolverine fend off the Hand, and assume guardianship of Amiko. In a subtle bit of writing, it's also implied that Yukio specifically rushed back to Japan from New York because she knew Wolverine would be visiting Mariko's tomb on the anniversary of her death, and wanted to be there to help him (as opposed to Wolverine having contacted Yukio ahead of his trip to arrange a meet-up). 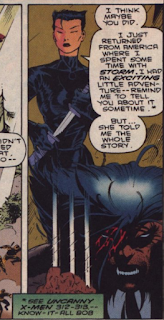 Amiko, Wolverine's long-neglected foster daughter (whom he promised her dying mother he'd look after in Uncanny X-Men #181) was last seen in the Kitty Pryde & Wolverine limited series, where Mariko was meant to be serving as her foster mother. Presumably, in the wake of Mariko's death, Amiko was placed in the Dickensian foster home she's at as this issue begins, and it simply took Wolverine this long to follow-up and check in on her, setting things up so that Yukio is now, effectively, her foster mother. Amiko will, after this issue, unfortunately slip back into comic book limbo (she next appears in the series' '96 annual), but when she does pop up, her relationship with Yukio is mostly maintained. 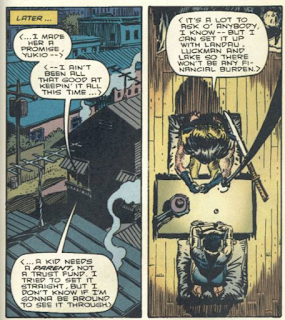 Albert & Elsie-Dee, the robot Wolverine and ten-year-old girl created by Donald Pierce in an attempt to kill Wolverine, return this issue. They were last seen being sent back in time by Spiral in order to investigate their discovery of a Wolverine skeleton, in issue #53. Bloodscream discovers the inert Elsie-Dee in a Siksika burial mound, with a footnote referencing an as-yet-untold adventure as the explanation for it; that story will be told in issue #86. 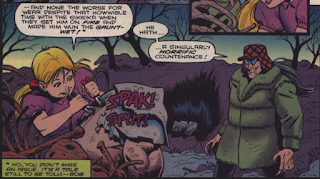 A footnote declares that the issue's title translates to "everything changes", though "everything gets changed" is more accurate. 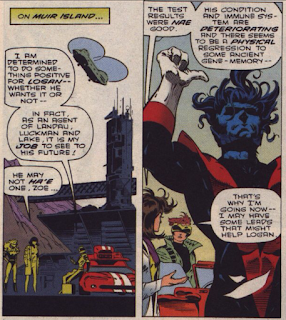 In a rather humorous bit, Amiko's foster parents immediately see through Wolverine's ruse and recognize him as the "social worker" who visited them earlier in the day when he shows up at night, in costume, to rescue the girl. 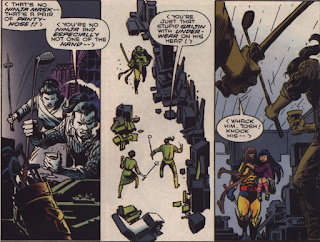 The Honor Sword of Clan Yashida, which was instrumental in Wolverine's (temporary) killing of Bloodscream in issue #78, is given to Silver Samurai. 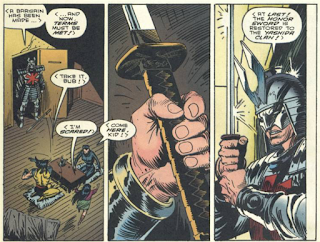 The Grim 'n' Gritty 90s
Questionably, Amiko's foster parents' translated English is written in the stereotypical manner of replacing "Rs" with "Ls" (even though what we're viewing on the page is meant to be a written representation of them speaking Japanese).

Austin's Analysis
After the hyper-kinetic and drawn-out story of the previous three issues, this marks a return to form for the more measured, elegiac post-adamantium era of the series, with Wolverine tying up personal loose ends, believing, with his healing factor seemingly gone and his body more vulnerable than ever, that he's on the verge of death (an idea hinted at previously, but explicitly stated here). Of course, this issue also gets points in its favor for being steeped in continuity references, from Wolverine acknowledging the anniversary of Mariko's death, to the return of his long-forgotten foster daughter Amiko, to even something as simple (and recent) as Yukio popping up in this issue and referencing her *just* completed adventure with Storm & Gambit in Uncanny X-Men.

But the biggest impacts of this story still come from the quieter moments, like Yukio tricking the (extremely) gullible Hand ninjas to save Wolverine, or Amiko's Dickensian existence and the sheer joy on her face when Wolverine plays into her fantasy about a ninja coming to rescue her, or just Wolverine, quietly shuffling through the issue, believing he's on death's door and trying to make life better for the people he cares about before he goes. We know that, ultimately, Wolverine isn't on the verge of death, but *he* doesn't, and so his actions motivated by his belief in his impending death still resonate.