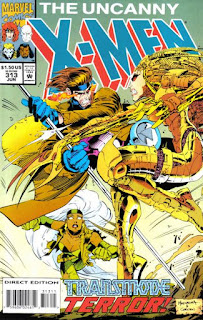 In a Nutshell
Storm, Gambit & Yukio manage to drive off the Phalanx.

Plot
Pulled underwater by the Phalanx, Gambit is able to trigger an explosion that allows him to escape & pull Yukio to the surface. At the X-Mansion, Beast tries to revive the comatose Iceman, while Banshee consoles a distraught Jubilee and Professor X confronts the recaptured Sabretooth, confirming his dedication to curing Sabretooth of his homicidal tendencies. Back in the city, Storm fights off the Phalanx who had been disguised as a NSC agent, then reunites with Gambit, while elsewhere, the leader of the Phalanx, Stephen Lang, deals with a surprisingly-independent Douglock. In New York, using Yukio as bait, Gambit & Storm team-up to charge an enormous ship anchor with kinetic energy, then drop it on the Phalanx, triggering a large enough explosion to scatter the pieces of the Phalanx into the ocean, though Storm knows this won't be the last time the X-Men face them. Back at the mansion, Iceman wakes up, ranting about being trapped in the mansion, prompting Professor X to calmly welcome the White Queen back to the land of the living.

Firsts and Other Notables
The issue ends on the cliffhanger that Emma Frost, the former White Queen of the Hellfire Club, has taken control of Iceman's body (with Iceman's mind in her body, as we'll eventually find out), setting the stage for next issue, which will essentially re-introduce Emma Frost and set up her role in the upcoming Generation X book. 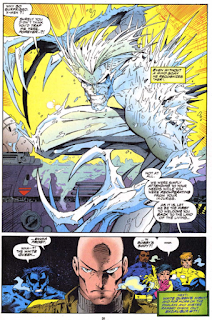 Banshee, who's been hanging around the mansion making semi-regular appearances here and in Adjectiveless, pops up this issue. He has a chat with Jubilee, in what amounts to more setup for Generation X, in which Jubilee expresses her doubts about continuing on as part of the X-Men given all the hardship they routinely face, leading Banshee to think to himself that, with Xavier's attention on the Legacy Virus (something we'll see soon in Excalibur), somebody needs to be looking out for the children, so to speak. 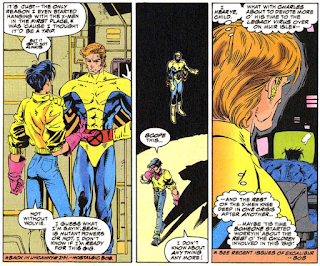 It is revealed here that Stephen Lang, former head of Project: Armageddon and inheritor of the Sentienl legacy, who kidnapped the X-Men in issue #98 (thus kicking off all the Phoenix stuff), is the driving force behind the Phalanx (Lang's relationship to the Phalanx and the question of who is "leading" them gets a little complicated down the line, but for now, it's fair to consider him the ostensible leader). 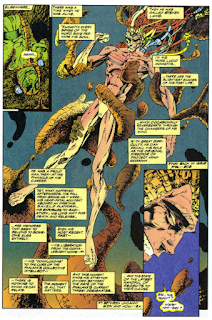 More importantly (to me, at least), Lang is revealed to be the strange patient who was removed from a mental hospital by one of the Friends of Humanity in issue #291; when I first read this issue, I was immensely satisfied to have that particular mystery resolved (even while stuff like the identity of the X-Traitor still swirled about), with said resolution contributing to my (deeply, deeply incorrect) belief that all this stuff was being planned out ahead of time (ie it never occurred to me that when Lobdell wrote the scene with Lang in issue #291, he didn't already have the Phalanx in mind, knew that Lang would be their leader, and had already determined the issue in which that information would be revealed because, as has been documented before, I was a very dumb/naive kid when it came to this kind of stuff. Heck Lobdell probably hadn't even decided that was Lang when he wrote that scene in #291!).

Lang's consciousness being transferred into Master Mold (which then crashed to Earth, eventually menacing Cyclops in X-Factor #14 and kicking off the long-dormant Twelve mystery) is also referenced, but goes unfooted (it happened in Hulk Annual #7).

Fresh off his debut in Excalibur last month, Douglock pops up in this issue (chronologically before his appearance in Excalibur #77 as he's still part of the Phalanx collective). It is said here that the Phalanx absorbed deceased cells of both Doug Ramsey and Warlock to create Douglock (hoping to gain insight into the X-Men from him), though it's later revealed that Douglock is solely a resurrected Warlock.

It's also not clear if Douglock's resistance to the Phalanx here is being caused by Zero (as referenced in his debut) or happening entirely of Douglock's own volition.

Cameron Hodge, last seen as a proto-Phalanx "defeated" by Archangel & Candy Southern in issue #306, is on hand as part of Lang's inner circle.

In an appreciated bit of inter-series coordination, at the end of the issue, Yukio tells Storm she has to get back to Tokyo to meet Wolverine, with a footnote pointing to Wolverine #82. 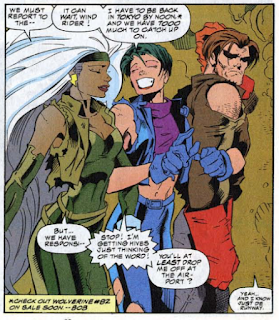 A Work in Progress
Between issues, Gambit, Storm & Yukio have been blasted off the pier where they were standing at the end of last issue, as this issue opens with them in the water.

In another of their Borg-like similiarites, it's said that the Phalanx are capable of adapting to mutant powers, such that they no longer work on them. Though again, I'm not sure how this works on more physical powers. Like, Rogue is super-strong; if she uses that power to rip the Phalanx apart, will it not work, because they've adapted to her strength?

Also, Gambit & the Phalanx are able to talk to each other underwater. Granted, their dialogue bubbles are altered to indicate a difference in sound, but still.

Throughout the issue, the comatose Iceman's powers spiral out of control. 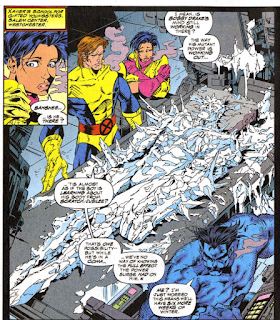 This prompts Beast to crack a joke, which in turn, angers Jubilee who, in a nice bit of characterization, is feeling the strain of recent losses. 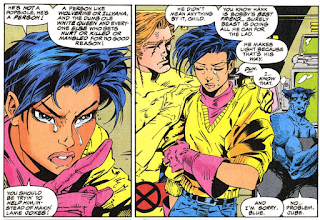 We're reminded (via a Star Trek reference) that the more mass an object has, the longer it takes for Gambit to charge it with kinetic energy. 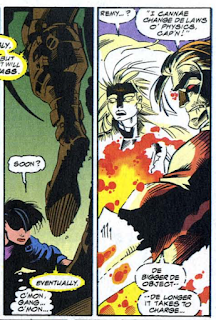 In the wake of Sabretooth's escape and confrontation with Bishop in issue #311, Bishop is worrying that he's losing his edge and, that without it, he's of little use to the X-Men. 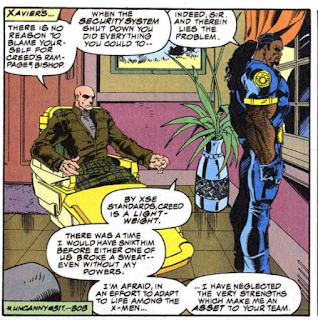 The Grim 'n' Gritty 90s
We can file "Beavis & Butthead trading cards" under "things so 90s they hurt". 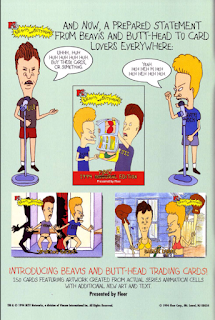 For Sale
There's an ad for an X-Men poster drawn by former (briefly) X-Men artist Jim Steranko available via, of all things, Chef Boyardee. 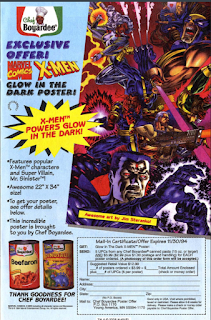 Entertainment This Month features an ad for the Batman/Punisher crossover that inadvertently got John Romita Jr. kicked off the book. 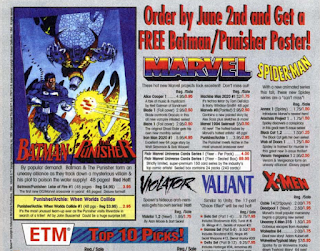 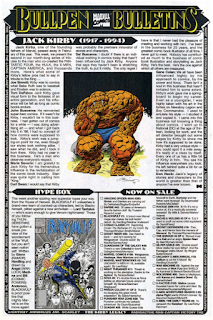 Austin's Analysis
One of the things the Phalanx portion of this issue and the last does really well, both in creating an entertaining story immediately and in setting up the Phalanx as major threat for the future, is sell how difficult they are to beat. Between their ability to adapt to specific attacks, and their relative invulnerability (in terms of being able to be blown apart and pull themselves back together), they're tough foes to face. Across these two issues, they take some pretty significant hits from Gambit & Storm (two of the more powerful X-Men, at least terms of "ability to blow things up" powers), and in the end, the X-Men only win because they manage to blast the Phalanx into such small pieces (and then disperse said pieces in the ocean), that the time it will take them to reconstitute themselves is enough to allow the X-Men to escape. Anyone who has read more than one comic before knows neither Gambit nor Storm (nor really even Yukio) are in danger of dying in this story, but a good action/adventure story should still leave the reader wondering how, exactly, the effectively-immortal protagonists are going to escape/survive their seemingly unbeatable foes, and this story excels at generating that sensation, as we watch the Phalanx shrug off blow after increasingly-stronger blow from the X-Men and keep coming back for more.