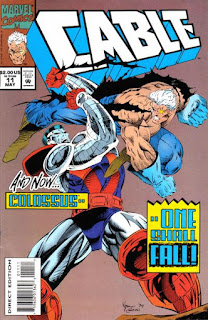 Plot
Cable uses his control over Magneto's arctic base to escape from the assembled Acolytes, then watches as they split into teams to find him. Meanwhile, in Flordia, Lee Forester's first mate Paolo is pulled into the water by an unseen attacker and killed. As Cable uses the base to pick off the Acolytes one by one, Voght teleports him out of the fray, telling him that Omega Red is planning to release his death spore virus in the base, not outer space, thereby killing all life on the planet. While some of the Acolytes are okay with this, she is not. Cable fights his way past Colossus to get to Omega Red, but Omega Red overpowers him just as the virus is about to release. Just then, Katu intervenes, using his power to obliterate both himself & Omega Red, saving the world. In the aftermath, Colossus tells Cable there's no reason to continue fighting, and Cable tells Colossus that he hopes he knows what he's doing, for humanity's sake.

Firsts and Other Notables
After scripting over Fabian Nicieza's plot last issue, Glenn Herdling handles all the writing in this issue, marking the end of Nicieza's tenure on the title he launched and the beginning of Herdling's small run (if you want to call it that; he stays on the series in some capacity through issue #14).

The story concludes with the apparent deaths of both Katu and Omega Red, with Katu using his powers to incinerate them both before Omega Red can release his death spore virus and kill everyone on the planet. Of course, neither is really dead, with Katu returning in X-Men #41 and Omega Red in Generation X #8. 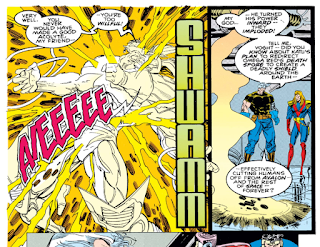 Lee Forrester, the Floridian commercial boat captain who helped pull Cyclops out of his post-Phoenix death funk, last seen hanging out with Magneto circa "Secret Wars II" pops up this issue in a brief interlude. She will return in a larger role for the story beginning next issue. Along with Lee, her longtime mate Paolo also pops up, only to be dragged into the water and killed. Next issue will reveal that he was killed by a surprisingly-resurrected Senyaka (the Acolyte with the whips). 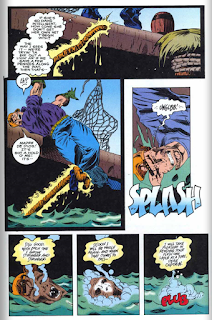 Creator Central
As with X-Factor and Excalibur, Bob Harras cedes full editorial duties on the series this issue, handing the reins over to Lisa Patrick and remaining as the "Group Editor".

There sure were a lot of inkers who worked on this issue, even by the 90s/this series' standards.

A Work in Progress
Between last issue and this one, Rusty now appears along with the rest of the Acolytes, and there are the correct number (two) of Kleinstock Brother. It's a shame that both Rusty & Skids, while appearing with the group in the opening splash, disappear after that, considering their history with Cable (not just as former members of Stryfe's MLF, but the fact that Cable was trying to rescue them from federal custody in his first appearance). 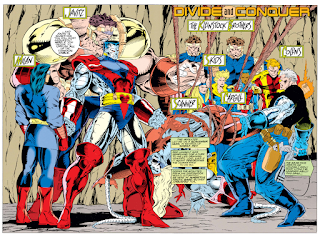 Cable is quite sure how to refer to the defected-Colossus. 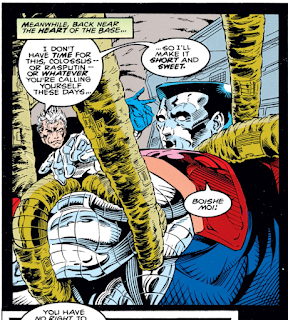 He also wonders if perhaps Colossus blames him for Illyana's death at the hands of the disease released by Cable's clone (Colossus is at, arguably, his most villainous in this issue - in his other appearances amongst the Acolytes, usually under Lobdell or Nicieza, he is presented as a reluctant member/moderating voice within the group - so perhaps he does bear some resentment towards Cable specifically. Or Herdling is just writing him out of character). 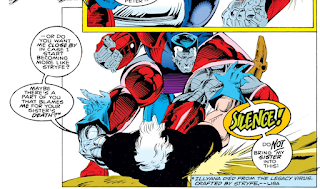 The Grim 'n' Gritty 90s
The device Milan uses in conjunction with his power is called a Gameboy. He's also shown to be sensitive about his hilariously-specific 90s power. 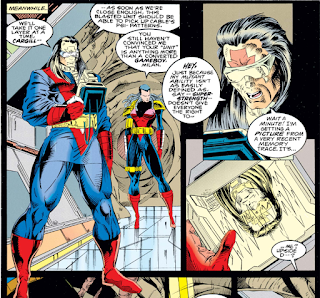 Artistic Achievements
Not surprisingly, given the amount of inkers, but Colossus' cape appears and disappears throughout the issue.

The Cable Guy
Cable is still referring to his eye as bionic. 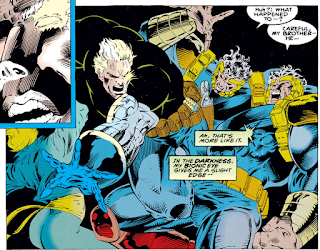 Austin's Analysis
Of the three issues in this three part story, this one is the most fun, with the Acolytes essentially cast as horror movie victims, with Cable the monster picking them off one by one throughout the haunted house. And on the whole, this is a pretty solid story. It has some problems - the Acolytes plan goes from "recruit Omega Red" to "use Omega Red to trick Cable into giving the Acolytes more control over Avalon" to "kill all humans" to "isolate Avalon from Earth", depending on the issue/the Acolyte, the logic behind Omega Red's actions is dicey, at best (he's going to free himself of the need to kill people by...killing everyone?), and the decision to highlight Katu, of all the Acolytes, seems random and/or questionable - but it's exactly the kind of story this series needs. It is a traditionally structured story (three self-contained issues) with low stakes (in terms of continuity & character development), in which the title character faces off against some (relatively) straight-forward villains whose motivations are shrouded in mystery solely for the sake of the immediate narrative. It's the kind of unflashy story series need to do every once in awhile, and while such stories, by design, rarely try to reinvent the wheel, for this series, which has been more or less all about tying up narrative loose ends for its title character since it's inception, it sort of does break new ground.