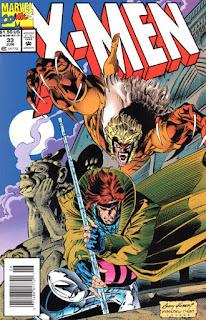 In a Nutshell
A tale of Gambit & Sabretooth's past together

Plot
In the past, a young Gambit rescues a woman named Genevieve from Sabretooth in Paris. In the present, Sabretooth stops his retelling to goad Rogue, but she insists he gets back to his story. He tells her how, in Paris, he tracked Gambit to a meeting with his brother Henri, where he explained that he planned to woo Genevieve in order to get close enough to steal a priceless necklace she stole from her husband, thus completing his initiation into the Thieves Guild. Elsewhere in the mansion, Beast ponders seeking Sabretooth's help to track down Mr. Sinister, while Sabretooth continues his story: after Gambit steals the necklace from Genevieve, Sabretooth captures her & Henri, telling Gambit to meet him at Notre Dame. There, he holds Genevieve & Henri over the edge, telling Gambit he'll trade one of them for the necklace. Gambit tosses him the necklace, but Sabretooth drops both, and Gambit saves his brother. Below, a dying Genevieve tells Gambit she loved him, and would have just given him the necklace. The story complete, Rogue goes outside, where Gambit tells Rogue he's a different man than he was then, but he needs her help to figure out what kind of man. Inside, Beast tells Sabretooth he needs to be at a briefing the next morning: he can keep trying to fight the world, or start finding a way to live in it.

Firsts and Other Notables
This issue reveals the history between Gambit & Sabretooth (or at least part of it), something which was first teased back in issue #6 when Sabretooth & Gambit encountered one another for the first time on-page. It is framed as a story being told by Sabretooth to Rogue, who came asking as she attempts to square her blossoming feelings for Gambit with his cavalier & occasionally flippant attitude.

Gambit notes that the story Sabretooth tells here isn't the only previous encounter he shared with Sabretooth; it will eventually be revealed that at least one of those other meetings occurred when Gambit, on orders from Mr. Sinister, helped assemble the Marauders (whom Sabretooth was part of) and lead them into the Morlock Tunnels ahead of the Morlock Massacre as shown in "Mutant Massacre", a revelation that will drive a significant wedge between Gambit & Rogue. 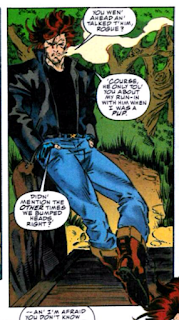 Henri, Gambit's adoptive brother who debuted and then died in the first issue of Gambit's limited series, appears in the flashback. It is his last appearance to date. 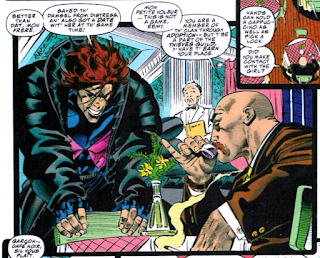 Beast seeking out information from Sabretooth about Mr. Sinister is setup for next issue's story.

Collection Recollection
This issue served as the inspiration for a short story I wrote in high school (which went on to win some kind of regional young writers award) titled "Only What Were Worth Your Love" (which is a line from a Robert Browning poem).

A Work in Progress
In the flashback scenes, Sabretooth is rightly drawn wearing a pretty close approximation of his original costume, as opposed to the Jim Lee redesigned one. 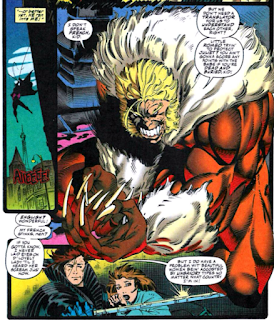 Upon first meeting Gambit, Sabretooth is able to peg him as member of the Thieves Guild. 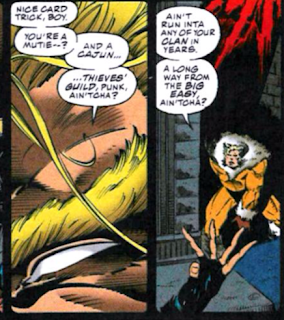 Sabretooth uses a "memory image inducer" to show Rogue his past encounter with Gambit, a device that was devised and given to Sabretooth to help him sort through his memories as part of his therapy. 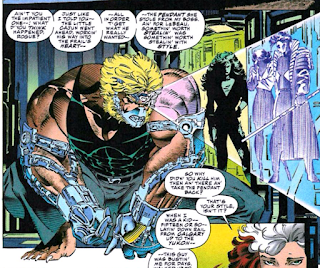 In talking to Rogue, Sabretooth mentions a time he was laying rail from Calgary to Yukon, confirming that, if not Canadian, Creed has at least spent some time there in his past.

He also needles her about the fact that Xavier is working so hard to cure him, while she remains unable to control her power/memory absorption abilities despite having come to the X-Men specifically seeking that help a while ago (and, I mean, he's not wrong...).

The issue ends with Sabretooth watching a member of Graydon Creed being held by Leni Zauber (Mystique's identity when she & Sabretooth conceived Graydon). 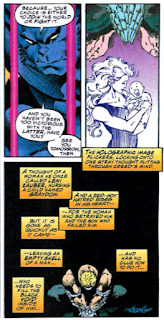 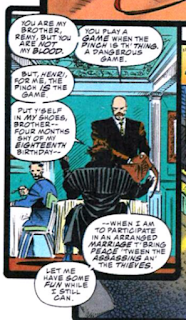 It's in the Mail
Reactions to the Cyclops/Jean Grey wedding in issue #30 prompt a two page Letters Page this issue. Amongst the responses is a plug for X-Men: The Early Years, which makes this as good a time as any to point out that at this point in time, Marvel was publishing two separate series reprinting X-Men stories (three, if you count Sabretooth Classics as well): X-Men Classic is still running, reprinting issues circa Uncanny #200, while the new Early Years started at the beginning with the very first issue of X-Men; it lasts a significantly shorter time than X-Men Classic.

Austin's Analysis
Gambit's past with Sabretooth at the time this issue was published was hardly one of the longest-running or most hotly-simmering mysteries (what with the X-traitor still at large), but it had gotten juiced thanks to the regular presence of Sabretooth in the X-books since he was taken in by Professor X, so it must have been tempting for Fabian Nicieza to craft the reveal of their previous interactions into a Big Deal, something with strong connections to an important event(s) in X-History. And while that will later still come about under other writers, for this issue, Nicieza opts instead for a much quieter, more character-driven reveal, one which is more concerned with speaking to the immediate relationship between Gambit & Rogue than upending years of X-history for shock value.

And the issue is all the better for that. It is, ultimately, a character-study of the young Gambit (and, by comparison, the question of how different he is from Current Gambit), albeit one told from the perspective of an untrustworthy narrator who has an incentive to paint Gambit in the most negative light possible, which doesn't paint Gambit in the most positive light as a youth, nor assure readers he's significantly better in the present. The end result is a story that almost reads like a morality fable, with the question of whether or not the central character has learned the imparted lesson very intentionally left up in the air. While this probably isn't the earth-shaking revelation some fans may have wanted from all the teases, it nevertheless is an affecting, lingering story that ages remarkably well because it's biggest impact resonates with the characters.

Next Issue
Tomorrow, X-Force goes on a hunt in X-Force #35. Friday, Douglock gets a proper introduction in Excalibur #78. Next week, X-Men Unlimited #5.