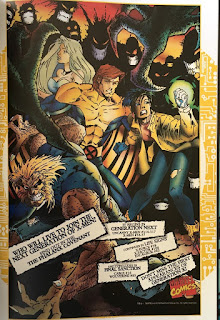 In the previous "upcoming X-aminations" post, I asked for feedback regarding the avenue I go down as I attempt to get back on schedule: take a break and post one-a-week Retro X-amination reviews, or simply slow my pace to one-a-week reviews for a while. In the end, I decided to split the difference, and do both!

So, after finishing up with the April '94 reviews, we'll look at a batch of retro reviews, followed by a handful of one-a-week standalone reviews of stuff on sale circa April and May of 1994. After that, hopefully, things will be back on a normal schedule and I'll have built up a backlog to help ride things out until at least the end of the year.

And while the second half of the year will cover a fairly limited about a publication time (books on sale May through September of 1994), a lot of stuff is happening: "Phalanx Covenant", the next linewide crossover (and last traditional crossover for awhile) begins and ends, Joe Madureira returns to begin his run as the new regular artist on Uncanny X-Men, and the line adds its eighth non-reprint, non-future-set, non-cartoon tie-in monthly book in Generation X as the concept of "teaching young mutants how to use their powers" is dusted off and featured once more.

Additionally, one of the things I'm going to do moving forward with these "review schedule" posts, in order to add a little additional content/discussion points, is provide my monthly "power rankings" of all the series, based on how good the previous month's issues were and how much I enjoyed reading them.

To kick that off, I'll rank the series based on roughly the last six months' worth of issues. So here are the inaugural "X-Book Power Rankings", and following that, the full list of upcoming reviews for the rest of 2018!

The two main titles start off in the top spot, and the line as a whole always does well when the "home" books are leading the way. Uncanny just barely gets the nod ahead of Adjectiveless on the strength of John Romita Jr. and the one-two-three punch of issues #308, #309 and #310, but X-Men #30 alone almost overpowers all that.

I'm as suprised as you are that X-Force is the third-best X-book in early 1994, but it's a testament to how well Nicieza has de-Liefelded the book and turned it into a proper New Mutants legacy title while still saying more or less true to the series "extreme!" roots.

X-Factor, meanwhile, is the epitome of average: solid, consistent storytelling & art month in, month out, but little is happening to be excited by or that leaves much of an impact. Even Madrox' death didn't move the needle much.

5. Cable
Cable is moving in the right direction, after the continuity-laden "Fathers & Sons" cleanup story and the refreshingly-bog-standard Omega Red/Acolytes story, but it remains in search of consistency, both narratively and in terms of its creative team (it's never really had a stable one).

6. Wolverine
Wolverine, meanwhile, is up and down. Issues drawn by Adam Kubert tend to be pretty good, but he's absent more often than not. And for every issue #78 or #82 that, there's the interminable Cyber story that drags on too long.

7. X-Men Unlimited
Unlimited stays out of the bottom spot thanks to issue #3 (which introduced the whole "Sabretooth in the X-Mansion" plotline and, feelings about that plot aside, was reasonably competent in its execution) pulling up issue #4, which was outright terrible on nearly every level.

8. Excalibur
Excalibur is only consistent in that it's a consistent mess. Characters cycle in and out, there's very little narrative direction despite a reasonably intriguing premise (Excalibur as Moira MacTaggert's X-Men, basically), and the creative team is a mess (with Lobdell neither shitting nor getting off the pot in terms of being the book's writer, scripting duties getting passed around, and Ken Lashley, the 'regular" penciler, skipping as many issues as he draws). There is simply no series at this point in time I dread reading more than Excalibur.

Now, a look ahead at upcoming reviews. As always, let me know if you spot any errors or omissions!