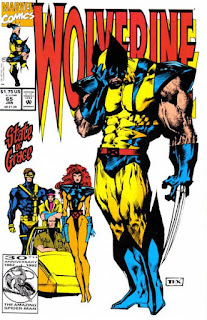 In a Nutshell
Wolverine deals with the death of Silver Fox.

Plot
Over Xavier's objections, Wolverine takes to the Danger Room, using it to recreate the encounter between his past self, Sabretooth & Silver Fox in Wolverine & Silver Fox's cabin as an attempt at catharsis in the wake of Silver Fox's death. When that doesn't work, he heads to a bar in Salem Center, where he hustles some pool to instigate a fight and get beat up. Jean arrives, and tries to help him work through his grief, but Wolverine points out that part of his problem is that when facing the deaths of so many people he cares about, not even his happy memories can comfort him, as he no longer knows which are true and which are fake. The next morning, he goes to Silver Fox's funeral, but learns SHIELD has appropriated her body, and that John Wraith has arranged for her to be buried at the cabin. He takes Wolverine there, and upon seeing the cabin, realizes his good memories of that time are real. He buries Silver Fox nearby, then says goodbye, promising to visit every spring.

Firsts and Other Notables
Despite last issue ending with a "to be continued" blurb, this issue is essentially an epilogue to the story, with all the characters involved save Wolverine & Jubilee (like Psi Borg, Sabretooth, Maverick etc.) all disappearing between issues and the story picking up back at the X-Mansion with Wolverine in the Danger Room.

As a result, this issue confirms that Silver Fox did indeed die, for real this time, in issue #63, despite her death coming via that old saw of being eaten by a man-eating tree, and despite the suggestion in that issue that she may still be alive.

Wraith does turn up briefly, helping Wolverine carry out Silver Fox' funeral as a thank you for Wolverine's help with the Terry Adams situation, something Wolverine doesn't remember (and which gets brought up twice in this issue); the story behind "Terry Adams" will drive the plot of the next three issues. 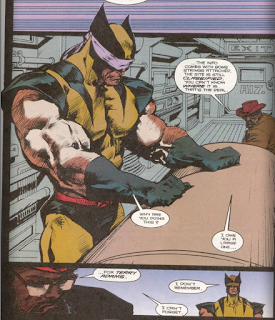 The opening page makes it clear this story takes place before "X-Cutioner's Song".

Creator Central
Mark Texeira thankfully returns on pencils this issue, though he is no longer inking himself, and will be inked by other artists for the duration of his run (which only lasts through issue #68).

A Work in Progress
The previous subtext about what Sabretooth did to Silver Fox in that cabin if he didn't kill her edges even closer to full out text, with the "she said no" line repeated. 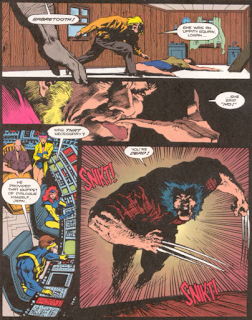 Wraith is once again said to have a lot of push, and is able to go over Nick Fury's head, though I don't think we ever find out exactly why that is.

The previous issue established the idea that while any of Wolverine's bad memories could be fakes, most of the good ones were real (since it didn't serve Ferro's purposes to make the Weapon Xers happy), yet here, Wolverine spends much of the issue once again wondering if his happy memories of being with Silver Fox are real, until he's taken to the cabin, which seems to affirm his memories (again). 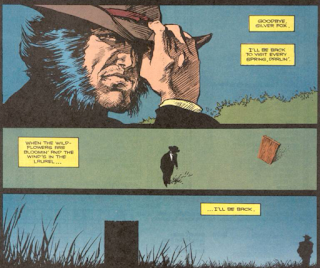 The Best There is at What He Does
Jean reminds us that while Wolverine's healing factor heals him, it doesn't prevent or dampen pain. He also manages to patch up his face (including an eyeball hanging from its socket) in a matter of pages, as the healing factor edges closer to near-instantaneous healing. 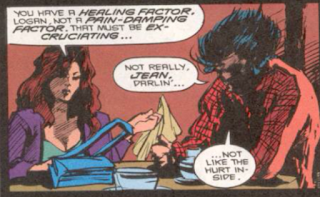 Austin's Analysis
A surprisingly effective epilogue to the Weapon X/Psi Borg/memory implant story, in which Wolverine spends an issue mourning Silver Fox' death in various ways. We see him get out some aggression via the Danger Room, then pick bar fights just to feel something, and have a heart-to-heart with Jean Grey, before presiding over a rather moving funeral for Silver Fox. Granted, it would have been nice to see Hama do an issue like this after Mariko's death, especially considering her relationship with Wolverine existed as more than flashbacks whose veracity was constantly being questioned, but still. A welcome display of emotion from Wolverine.

All that said, where the heck did this come from?!? Granted, I hadn't been following this storyline with my full attention, but nowhere in the previous issue did I get the impression it was, effectively, concluding the story. I seriously went back to that issue, and then the start of this one, repeatedly, to make sure I wasn't missing an issue or reading one ahead or anything like that. The apparent conclusion to this story had no aftermath to the fight with Psi Borg, no reunited Weapon Xers going their separate ways, resolving the question of their age-suppression factors that started it. Just Sabretooth getting eating by a man-eating tree (so...is Sabretooth dead?). With all the real/implanted memory fakeouts in this story, it wasn't even entirely clear that Silver Fox was dead for real; while this issue puts that question to rest, it would have been nice to *know* Silver Fox was dead before seeing Wolverine mourn her here. It's tempting to blame the previous issue's art (which certainly didn't invite close reading), but this seems like a fail on Hama's part, presenting an epilogue to a story without giving it a proper conclusion.