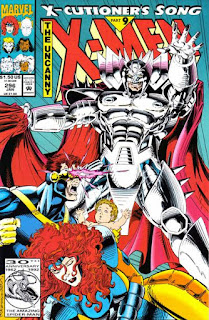 Plot
Cyclops & Jean Grey battle the Dark Riders as they attempt to escape from Stryfe. Meanwhile, Beast manages to remove the bullet from Xavier's head, but Moira reports that, upon breaking the virus' binary code, it only contained a mocking message from Stryfe. On Graymalkin, Wolverine, Bishop & Cable go over recent events in the hope of deducing Stryfe's location. At Stryfe's base, Cyclops & Jean Grey suddenly encounter an infant bearing an uncanny likeness to Cyclop's son. At the mansion, Archangel vouches for Apocalypse, and Storm agrees to let Apocalypse try to cure Xavier. At Stryfe's base, Stryfe tells Cyclops & Jean Grey that the baby is connected to him; kill it, and they'll kill him. But the pair refuses to do so, and instead, blasts a hole in the wall of the base, through which they're almost immediate yanked. Just then, Wolverine realizes where Stryfe is keeping Cyclops & Jean, and why Jean hasn't been able to telepathically call for help: because they're not on Earth at all.

Firsts and Other Notables
This issue is littered with hints about Stryfe's origin, including his comment that Cyclops and Jean Grey destroyed him (ie sent him to the future, where he became Stryfe). The big clue comes when Cyclops and Jean encounter an infant whom Cyclops says looks just like Nathan Christopher, and Stryfe tells them the child is linked to him, such that if they kill the child, he will die. He is confident they will do so, and is taken aback when they refuse to arm the child (the baby turns out to not be real). Cyclops, noting that the scenario is remarkably similar to what happened to Nathan Christopher, wonders how Stryfe could possibly know the details, unless he was there. 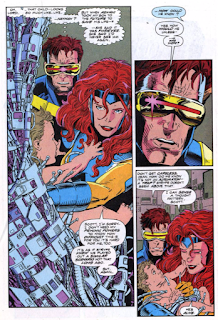 Stryfe is confidant Cyclops will destroy the child to get to him, because he believes it happened before (ie that Cyclops destroyed Stryfe, as Nathan Christopher, to get at Apocalypse, from Stryfe's skewed perspective, at least). 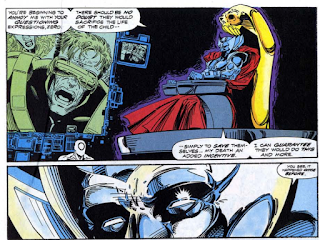 Upon realizing that Cyclops & Jean won't sacrifice the fake baby, Stryfe (specifically, per the narration, the child within him) is rocked, as he finds himself wondering if all they truly committed all the sin he's spent his lifetime hating them for. 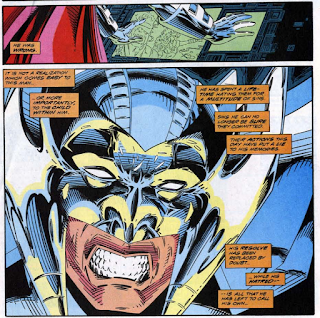 Stryfe's base of operations throughout this story is revealed to be Apocalypse's old base on the moon, explaining why Cerebro couldn't detect him, and why Jean wasn't able to reach anyone telepathically. 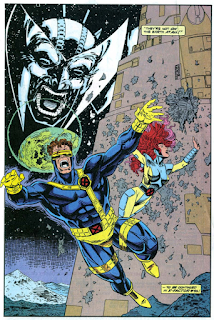 This issue is littered with footnotes to incorrect issues, specifically to chapters of this story (ie events in X-Factor #85 are footnoted with #84). 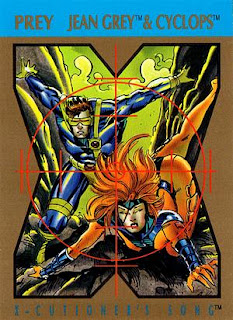 A Work in Progress
Between the last chapter and this one, the Dark Riders have joined Stryfe at his base, and Apocalypse has setup some kind of rejuvenation bath in the mansion.

Jean is able to telekinetically hold back Cyclops' optic blast, which was a notable ability of Phoenix back in "The Dark Phoenix Saga". 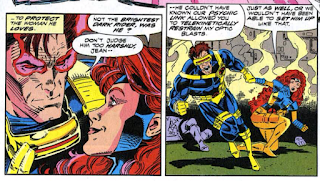 Upon learning that the Dark Riders have switched allegiances to Stryfe, Cyclops jokes that it's wonder villains have time for world-conquering bids with all the in-fighting they do. 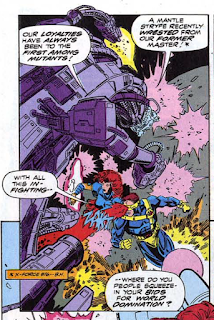 Beast manages to successfully remove the techno-organic slug Xavier was shot with from his head, while Moira manages to break the virus' binary code, which just results in a taunt from Stryfe. 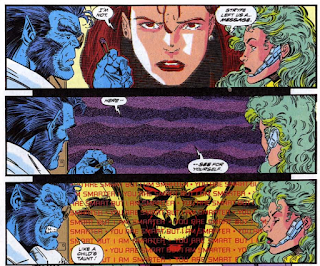 There's essentially a two page recap of the story thus far in this issue, presented as a summation of events to Cable, Wolverine & Bishop as they try to deduce Stryfe's location. 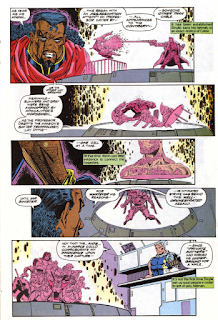 Archangel says his wings are of a similar techno-organic nature to the virus ravaging Xavier, the first time they've been explicitly labeled as such. He also notes that Apocalypse was present when Nathan Christopher was sent into the future, subtly reminding readers of the connection between the two (and, by extension, Stryfe). 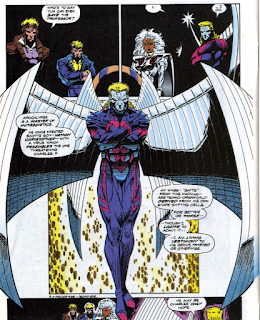 Stryfe calls his base an "apocalyptic tomb", which takes on new meaning when it's revealed that it's an old base of Apocalypse'.

The Cable Guy
Once again, the question of if Stryfe is a copy of Cable or vice versa is raised.

Artistic Achievements
There's a neat little artistic bit in this issue, in which Wolverine is shown in the background absent-mindedly cutting into a table with one of his claws. Then, at the end, when he realizes Cyclops and Jean are on the moon, it's revealed that he's been carving an image of the moon into the table the whole time (X-Factor #86 will have Wolverine suggest that Jean has been telepathically reaching out to him, but only his subconscious was getting the message). 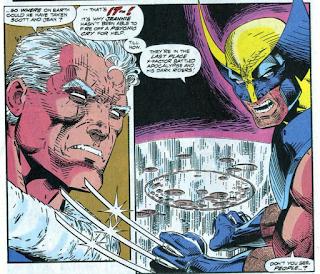 Austin's Analysis
While there's some additional business going on in the margins, the final act of "X-Cutioner's Song" opens with what is essentially the Cyclops/Jean Grey spotlight chapter. After hanging around in the background, doing little more than being held captive/tortured/humiliated by Stryfe, for most of the story, here they make an escape attempt, and in the process, give readers the biggest clues yet to Stryfe's origin. While the complaint that, ultimately, this story fails on its promise to reveal once and for all the relationship between Cable, Stryfe, Cyclops & Jean Grey, is entirely justified, it's also hard to not read this story and still walk away with a pretty good idea that Stryfe and Cable are, in some way, Nathan Christopher Summers, especially after this issue.

Already in this story, Stryfe has been dropping cryptic bits of dialogue to that effect left & right, and that ramps up here, with several pretty blatant "I was baby Nathan" hints in both his dialogue and narrative captions. Additionally, he maneuvers Cyclops & Jean into a scenario in which he expects them to kill a baby whom Cyclops himself calls out as looking just like Nathan (and is then shocked when they refuse to harm the infant). Lobdell even slyly goes out of his way to work in a reference to X-Factor #68 in a different plotline of the issue's, putting that issue in readers' minds without making it too obvious by referencing it in the Stryfe/Cyclops/Jean plotline. As a result, even reading this as it unfolded in real time, before anything about Cable & Stryfe was later "officially" confirmed, it was plainly obvious that Stryfe was Nathan Christopher in some way. That the story failed to explicitly confirm that and.or explain it further by the end does it no favors, but with this issue, it pretty much does it all it can to make that clear without saying it explicitly.