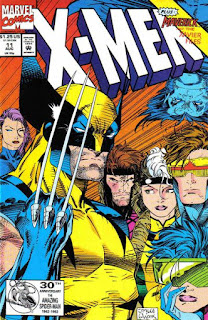 In a Nutshell
The X-Men defeat Mojo.

Plot
As Dazzler reluctantly agrees to work with Mojo II to save the X-Men and bring down Mojo, the X-Men, Longshot, and Lila Cheney fight one another in Mojo's Wizard of Oz parody. Eventually, the captive Professor X is able to make contact with Psylocke, freeing her from Mojo's control and using her to boost his strength. As Dazzler and Mojo II sneak into the arena, Psylocke & Xavier are able to use Cyclops and Wolverine to weaken the window into Mojo's control booth, and then free Rogue, enabling her to smash an opening into the booth just as Dazzler and Mojo II enter. Seeing Mojo on the verge of defeat, the people of Mojoworld rise up in rebellion, storming the facility as Longshot ends Mojo once and for all. In the aftermath of the battle, Mojo II is placed in charge, but is cautioned that Longshot & Dazzler will be keeping a close eye on him, and the recuperating X-Men look towards an uncertain future.

2nd Story: Maverick is unable to harm Warhawk with regular bullets, but is able to use a bolt gun to exacerbate the bullet holes left in Warhawk's omnium skin, causing Warhawk's energy to risk leaking out and exploding upon contact with the air. A desperate Ryking insists he has no idea how Xavier got ahold of the Xavier File, but just then, Warhawk explodes, killing himself and Ryking. Maverick leaves, having done his job.

Firsts and Other Notables
This is Jim Lee's final issue of X-Men, as he too leaves to help found Image Comics, ending a run that stretches back to Uncanny X-Men #267, spanning two titles. Reportedly, Lee was the biggest holdout of the Image founders, but the one the other founders most wanted to get on board because they felt his departure would sting Marvel the most. Ultimately, the thing that finally pushed him out was when Marvel refused to pay to send Lee's wife along to a convention to which they were paying to send him.

Finally, after an exceedingly large number of teases (and a trading card appearance), Mojo II (The Sequel, as he insists on adding) makes his first full appearance this issue. It's established that he is a failed clone of Mojo, failed because he has empathy for other beings. Despite all the hubbub leading up to his appearance here, nothing really comes of the character, who makes just a few appearances after this issue. 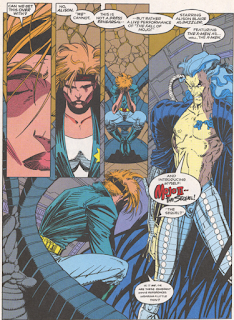 Similarly, Mojo appears to die this issue, slain by Longshot. And while it will (thankfully) be a little while before he returns, he does indeed come back and settle in to his usual status quo of running the world/verse that shares his name. 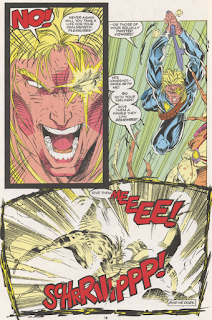 Despite being something of a regular (albeit part-time) fixture in this series for the last half dozen issues leading up to this story, this unfortunately also marks the last appearances of Longshot and Dazzler for awhile. Longshot next turns for a few issues starting in X-Force #59, but his next regular gig won't come until Exiles in the 00s, whereas Dazzler next pops up briefly in issue #47, with her next ongoing role in a book not coming until Chris Claremont's New Excalibur series.

This issue also reveals that Dazzler is pregnant with Longshot baby, and in the closing pages, the name "Shatterstar" is suggested, seemingly as a joke. The notion of Shatterstar being Longshot's child (something first suggested in X-Factor Annual #7, though Fabian Nicieza (who wrote that issue) has said he never intended to do anything other than tease the idea) is something fans at this time will latch onto, and it will lead, in part, to some truly atrocious X-Force stories down the road, before Peter David, in his second X-Factor tenure, reveals that Shatterstar is indeed the child of Longshot and Dazzler, but that also, Longshot is a clone of Shatterstar (which isn't much better).

In the backup story, Maverick mentions that he misses his mutant power; an odd statement given that he seemingly used last issue. At any rate, I don't think anything comes of the idea that Maverick is powerless at this point in any of his future stories.

The cover to this issue is, I believe, an homage to the cover of issue #210. Or maybe it's just similar construction.

Warhawk apparently really hates the X-Men after their relatively innocuous confrontation in X-Men #110. 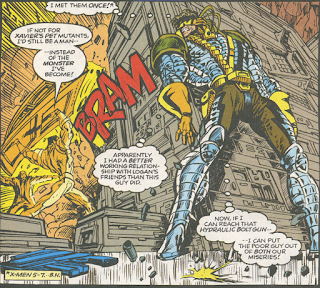 The Reference Section
The arena in which Mojo's Wizard of Oz pastiche is taking place is called "Mojo Square Garden".

In the final splash page, Jubilee is eating popcorn out of an Homage bucket, which is the name of Jim Lee's Image studio. 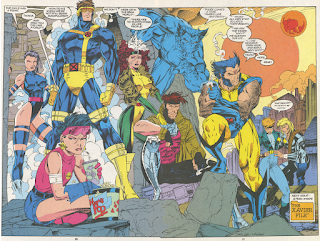 It's in the Mail
The Entertainment This Month ad in the back of this issue has listings for WildC.A.Ts, Jim Lee's debut Image series (as well as a listing for the upcoming Cable limited series). As a sign of how much of a rube I was as a kid, I remember that I felt like it would be betraying Marvel to buy comics published by other companies, but I liked Jim Lee's art, so I wanted to check out WildC.A.Ts. So when I saw this ad, I thought, "oh, if an ad for the Image books is appearing in a Marvel comic, then Marvel must be okay with me buying them!". Of course, I soon realized there's no reason not to buy comics from other companies, and that ETM is its own thing, not a Marvel house ad. And in the end, I never did check out WildC.A.Ts regularly (at least not until the Joe Casey/Sean Phillips relaunch). 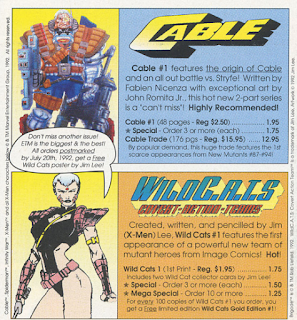 Austin's Analysis
And so the Image Era of the X-books comes to a close, with the final Image artist leaving Marvel just under a year after he was essentially given the keys to the kingdom and a new series all to himself. To Lee's credit, he completed every one of the eleven issues of this series, requiring no fill-ins, a feat none of his other fellow founders accomplished on their series, and going back to the start of his run on Uncanny X-Men, the only issue he didn't complete in full after getting the regular artist gig was #273, which was a jam issue (that he contributed a few pages to as well). His impact on the franchise will linger for years, both in the form of the ongoing second X-Men book he helped launch, his redesigned costumes (cemented in the minds of a generation of fans thanks to their use in the animated series) and the varied imitators who will ape his style long after his depature.

Unfortunately, his final issue is the rather ho-hum conclusion to the two-part Mojo story, a story which, thanks to its central antagonist and setting, manages to feel overly long despite not even filling two complete issues' worth of pages, with the central conflict in this issue another X-Men on X-Men fight (the third such in the series' eleven issues, after the Blue/Gold battle in issue #3 and Brainwashed Psylocke in issue #7), yet also strangely rushed, as a rebellion forms, storms Mojo's palace, and declares victory in the span of a few panels/slash the amount of time it takes Longshot to walk into the control booth and pick up a sword. Obviously, this was a story Lee wanted to have told before he left, and he should be commended for not leaving the series mid-storyline, but it's hard to get too excited about any of this, even with the promise of Mojo's death and the Shatterstar tease (the former, of course, doesn't stick, while the latter leads to some utter nonsense).

Still, the final (Lee-drawn) image of this issue, a double page spread of the team, resting after battle, looking to the (now especially uncertain) future, has some poignancy as the marker of an end of an era, an era which catapulted the franchise to new heights of popularity on the backs of superstar, albeit unknowingly short-term, artists, even while it also slowly eroded the overall level of quality.