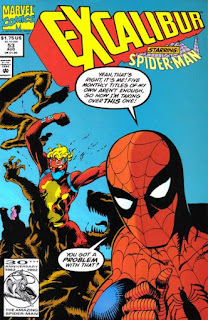 In a Nutshell
A flashback tale of Captain Britain & Spider-Man.

Plot
In the midst of spring cleaning, Meggan discovers a scrapbook of Brian's, which includes a picture of Peter Parker, whom Brian says is, in many ways, responsible for the hero he is today. He proceeds to tell her a story from his time as Peter's roommate in college, when he was training with Spider-Man on how to be a better superhero. After arguing with Peter and nearly getting into a fight with a group of foreign exchange students, Brian is in a bad mood the next night when he meets Spider-Man for their training session. This prompts Spider-Man to bow out. On his own, Captain Britain encounters the Litter, the foreign students he ran into before, who transform into humanoid dogs and attack him. Their fight draws Spider-Man's attention, but Captain Britain goes too far, using lethal force against one of the Litter, nearly killing her. Instead of calling an ambulance, a shocked Brian flies away and wanders the city, realizing he's never been held accountable for his actions. But when he returns home, he finds Peter waiting, and is told he has to leave. In the present, Brian tells Meggan this provided the wake-up call he needed, and he returned home resolved to be a better person and hero.

Firsts and Other Notables
The bulk of this issue is a flashback story set immediately Captain Britain's first American appearance, teaming up with Spider-Man to battle Arcade in Marvel Team-Up #65-66. Whereas the previous two issues had fill-in artists but Alan Davis remained as writer, this issue is written by Scott Lobdell, with art by James Fry (who, while no Alan Davis, is not bad). Davis returns next issue.

The villains of the flashback story are the Litter, a group of foreign exchange students who can transform into humanoid dogs. 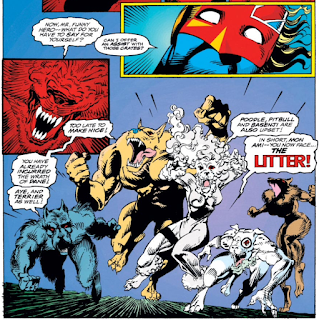 The cover pokes fun at the ubiquity of Spider-Man, who in 1992 was carrying five separate titles (including the Marvel Tales reprint book).

A Work in Progress
Captain Britain acts at times like he's some kind of alien robot visiting Earth instead of a Brit in America, unfamiliar the concept of "humor" (ie he's confused that Spider-Man would release a secret ID-compromising exercise video, when that's clearly just him bantering). 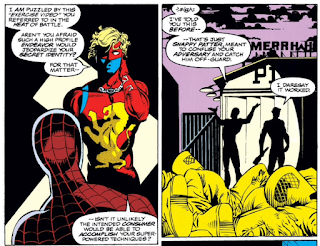 This story also seems to suggest that despite Peter Parker and Brian Braddock living together and working together as Spider-Man and Captain Britain, they don't know each other's secret identities. Which seems odd, but I assume is how their relationship was presented in Marvel Team-Up #65-66.

Brian's drinking problem is referenced, as Mary Jane notes it's early to be drinking already after he tries to get a morning brandy from the Coffee Bean. 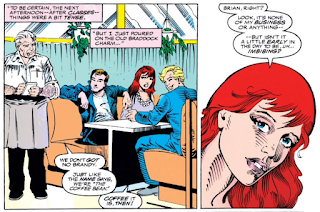 Austin's Analysis
Another fill-in issue, with this one the most fill-in-y of the last three issues, featuring as it does only Captain Britain and Meggan in the present and otherwise telling its story almost entirely in the past. As an inconsequential fill-in, it's fine. The villains are fairly lame, but the flashback story is really more about Captain Britain gaining a sense of heroic morality than it is about fighting villains, and for someone who hasn't read a lot of the pre-Excalibur Captain Britain, it was fun to see a younger, less experienced Captain Britain in his original suit. But this is nonetheless entirely filler and utterly superfluous and skippable, and more annoying, Lobdell struggles with young Captain Britain's voice, making him sound way more foppish and "British" (for lack of a better term) than ever before, and suggesting he's unfamiliar with some pretty basic concepts (though Lobdell's Spider-Man is not bad). Perhaps the idea is that as he's aged and become more heroic, he's lost some of that upper class veneer, but that seems like a stretch. Instead, Captain Britain just doesn't sound much like himself throughout most of this issue.