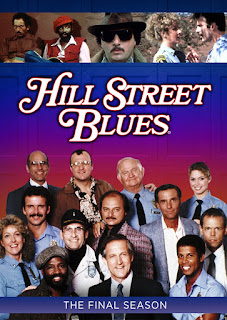 After a seven-year run, and a move to Tuesdays at 9:00 (opposite the hot new series Moonlighting), the consensus amongst critics seemed to be that Hill Street Blues was entering its final days.  I’m not entirely certain when David Milch and company knew that the series was truly done, but apparently the final nail was star Daniel J. Travanti’s decision not to return for a hypothetical eighth season.  You’d think that the concluding episodes of the run would serve as a tender farewell to Travanti’s honorable cop boss, but the character of Frank Furillo actually spends the final days of the series with little to do.


More than ever, Hill Street is an ensemble, and even Milch’s pet character Lt. Buntz doesn’t receive as many spotlight episodes this year.  After nixing several cast members last year, the list of regulars expands once again, introducing two young cops -- Officer Patrick Flaherty and Officer Tina Russo.  (I wouldn’t be shocked to learn that they were added at the network’s request to bring in younger, prettier actors.)  Their on-again/off-again romance is a recurring “personal life” subplot during the year, wandering aimlessly for weeks and never reaching a satisfying conclusion.  The idea that Tina is only interested in a physical relationship with Flaherty, who actually has feelings for her, was probably an unusual view of gender norms during this time.  But that doesn’t excuse the irritating pattern of Flaherty asking Tina to become his girlfriend, Tina rejecting him, and Flaherty pouting before asking again, over the course of numerous episodes.  A similar story, no less tedious, shows up years later on NYPD Blue, during James Martinez’s inexplicable pursuit of Adrienne Lesniak. 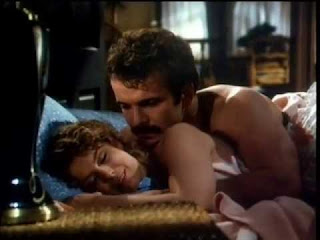 There are a few other echoes of NYPD Blue this year, notably in the connection between Officer Andy Renko and Det. Greg Medavoy.  Even though Medavoy was initially presented as a shy stutterer, he has quite a bit in common with the bombastic Andy Renko.  Both are neurotic, both have trivial subplots that have them falling victim to what they think is a gypsy’s curse, and both end up cheating on their wives.  Medavoy’s infidelity was presented in a more sympathetic light, while Renko is clearly the jerk in his situation.  That is, he’s the jerk until he discovers that his suspicions about his wife’s affair with her business manager were actually valid.  I assumed that this would be used as a way to make Renko right in the situation, but instead the show presents a more nuanced view on infidelity.  Both made mistakes, both need forgiveness, and no easy answer is ever presented.


I will say that Greg Medavoy never had an affair with a prostitute, which is what Renko’s mistress turns out to be.  There’s also a subplot about kindly old Sergeant Jablonski having his badge stolen by a prostitute after he spends the night with her.  (NYPD Blue would later do an episode about an older cop losing his dentures during a scam run by a prostitute and her pimp.)  What’s amazing is that there’s no real judgment of the character -- the gruff Sgt. Belker picks up the case, retrieves the badge, and makes sure Sergeant Jablonski’s name never shows up in the report.  I have to assume this reflects David Milch’s influence on the series -- in the early episodes, I could see the whole affair meriting an indignant lecture from Capt. Furillo.  Belker would face heat for trying to cover for Jablonski, and Jablonski would likely undergo an investigation, allowing Furillo another speech about how no one is above the law.


In the final year, the characters are more pragmatic, more willing to accept the world as it is.  And this includes Capt. Furillo, who is more disposed to look the other way, or at least not hand out so many lectures, as his cops face a series of thorny quandaries.  The voice of precinct conscience falls to Lt. Goldblume, who grows increasingly at odds with Furillo.  Goldblume is still idealistic, still willing to believe that the role of the police extends beyond incarcerating felons.  He rails against mandatory minimums on a talk show, defends the integrity of his friend (a victim of street violence who becomes a vigilante, and even mistakenly kills a cop), rejects efforts to prosecute what he views as victimless crimes, and ponders ending his career and starting life over as a novelist.  Goldblume is so pious, he’s even upset when Capt. Furillo allows a known associate of a street gang to be used as an informant…as opposed to supporting the young man in his dream of becoming an art student.  (Yes, everyone knows it’s the police’s responsibility to provide aid as you pursue a career in the arts.)  Goldblume is always presented in a sympathetic light, but on many occasions, the circumstances of the show also place him in the wrong.  There seems to be less tolerance for idealism, and more of a cold acceptance of reality in the series.


Milch also seems less interested in keeping some of the supporting players as the simplistic joke characters they were initially conceived to portray.  Even perpetual playboy/con artist J. D. LaRue has an emotional breakdown after he narrowly escapes death, and later realizes that few people in his life would really care if he actually did die.  And while Sgt. Belker isn’t above growling at times, the more compassionate aspects of the character usually define him this season.  He even remarks that “they used to call me The Biter” (a reference to his proclivity for biting suspects who irritated him) this year when dealing with a kid who is also a biter.  He used to be “The Biter” -- now he’s a noble, streetwise cop, willing to pass his wisdom on to the next generation of police.  It’s established that the young, attractive Officer Tina Russo views Belker as a mentor, and to the show’s credit, it never attempts to create romantic tension between Tina and the married Belker. 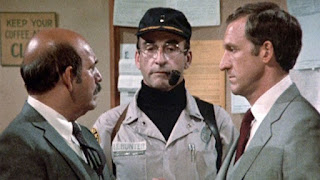 The most notable transition is Lt. Hunter, the SWAT leader who was always wandering the precinct, offering unsolicited advice and speaking in ridiculous monologues.  In the second episode of the year, he’s forced to shoot a perpetrator during a convenience store robbery.  Hunter’s adamant that the shoot is clean, but faces trouble when it’s revealed that the victim was in his early teens, the bullet hit his side and not his chest (placing doubt to Hunter’s claim that the kid was pointing the gun directly at him), the kid’s gun contained no bullets, and Hunter was carrying his personal piece, and not a department-issued weapon.


For most of the season, Hunter remains demoted during the investigation, becoming the new patrol sergeant.  He’s not a totally transformed character, but his dialogue is less absurd, his interactions with his fellow cops are more human, and he’s just more pleasant to have around as a supporting player.  Hunter’s loquacious manner of speech now plays as less pretentious and more thoughtful in a way.  Actually, the toned-down Hunter speaks in a manner that reminds me of Milch’s Deadwood dialogue.  It’s more poetic than pompous.


All of this evolution is abandoned in the episode that has Hunter, out of necessity, filling in as SWAT commander.  Actor James Sikking’s entire demeanor changes, reverting to the cartoon character we were introduced to in the pilot.  The gunman Hunter’s been asked to bring in is his former second-in-command (and mindless sycophant), Ballantine, another joke character from the past.  Hunter’s forced to shoot Ballantine, and whether or not Ballantine survives after being taken to the hospital is never revealed.  Was this a symbolic assassination of the more absurd characters that predate the Milch years?


Probably not, but it seems obvious that Milch isn’t entirely comfortable with comedic relief characters.  Not that he’s above creating them himself -- Sid the Snitch is a Milch creation who appears regularly, and he’s just as goofy as any Season One figure -- but Milch doesn’t want them clogging up the stories.  And if a recurring character has been portrayed too broadly in the past, the Milch episodes tend to be the ones that humanize him.  This was likely a combination of Milch’s instincts, and an acknowledgement that the show had been on for several years.  Long-running TV characters tend to become either more human or more cartoonish the longer they’re on the air.  (Is there a term for the opposite of a Flandersization?)  In the case of Hill Street, downplaying the sillier aspects of the series allows the show to become a clearer representative of how it’s remembered today.  People rarely mention the comedic plots, but overwhelmingly, the show is regarded as the grandfather of today’s serious drama.


Next Time…the series enters its final run, David Mamet pens his first TV script, and a ridiculous number of guest stars drop by.