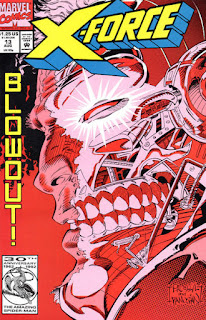 "Everything Hits the Fan"
August 1992

Plot
Weapon: Prime attacks X-Force, taking them by surprise, but as Cable scrambles to remove his technology from the base and re-set the charges intended to fakeout Tolliver, his team manages to overcome Weapon: Prime. Meanwhile, Gideon meets with Dr. Joshua, who is conducting painful experiments on Sunspot. Back at X-Force's base, Cable puts in a call to SHIELD medivac to retrieve the injured members of Weapon: Prime, then prepares to blow up the base and go after Tolliver. Just then, the charges go off, seemingly of their own accord, with Cable & Domino getting separated from the rest of X-Force and Weapon: Prime. As the base comes down around them, Cannonball shouts for everyone to get near him. Later, in Sicily, Tolliver gloats to the real Domino over reports of an explosion in the Adirondacks, revealing that Vanessa's override trigger worked, before toasting the death of Cable.

Firsts and Other Notables
Professor, Cable's sentient computer program, "appears" in the present day for the first time (after first appearing in issue #8's flashback), as Cable has his equipment teleported out of X-Force's base.

A Work in Progress
"Wendigo" is back to being Yeti this issue.

Cable notes that X-Force isn't as good at combat in close quarters, though in the end, they wipe the floor with Weapon: Prime pretty handily. 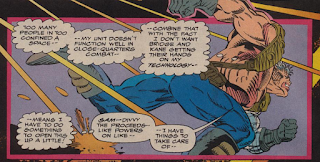 Sunspot is now being subjected to some kind of experimentation by Gideon, who isn't overly concerned about Sunspot's survival. 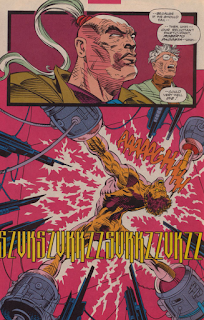 Cable repeats the crystal ball spoken by both him and Stryfe in earlier issues.

501 Genes
The opening salvo between Weapon: Prime & X-Force is depicted via a pair of double-page splashes, with each team on either side.

In this panel, Rictor has aged forty years for some reason. 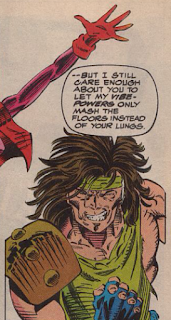 After Cable has his stuff teleported out of the base, Boom-Boom comments on its disappearance, which is good, because there's nothing in the art to really indicate it. 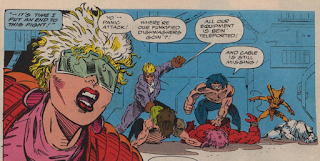 To the EXTREME!
Feral seemingly eviscerates Yeti, though it's not clear if she killed him or not. 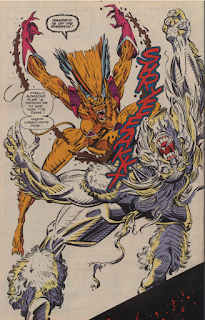 Austin's Analysis
The fight nobody asked for, X-Force vs. Weapon: Prime, drawn by Mark Pacella, the artist nobody asked for. It takes all of about five minutes to read this issue, thanks in part to a pair of double-page splashes presumably trying to mimic the effect of a foldout (it doesn't really work). Thankfully, while tying off dangling plots leftover from Liefeld, Nicieza is putting pieces into play for his own take on the series, a lot of which begins here, with the team being forcibly separated from Cable at the end (which happens this issue but becomes clearer in the next). Rictor is already back in the fold (and his past relationship with Cannoball & Boom-Boom referenced here), and Sunspot is being moved into position for his return as well. And in and amongst all the fighting, Nicieza also returns to the ongoing question, between  Cannonball & Boom-Boom, off how far they're willing to follow Cable and what kind of team X-Force is, all of which will continue to factor into the immediate post-Liefeld makeup of the series, to its benefit.