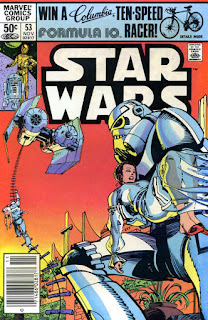 "The Last Gift From Alderaan!"
November 1981

In a Nutshell
Leia crash lands on a strange planet targeted by the Empire.

Plot
Drawn by a recent surge in Imperial activity, Princess Leia is participating in a mission to scout the Shiva system when her ship is hit with a mine. In order to protect the ship and its crew, she's forced to fly a damaged shuttle down to the planet Shiva IV. Crashing on the planet, she is attacked by a raiding party, but is rescued by Aron Peacebringer, leader of one of the local factions. Returning to Aron's capital city with him, she tries to warn him of the danger posed by the Empire, but he questions their existence. Weeks later, with no sign of rescue, Leia is attending a ball in Aron's court, finding herself somewhat enjoying the courtly life free of responsibility she's built for herself, when she and Aron are captured by a pair of Stormtroopers. They are taken before the Imperial general Sk'ar, who declares Aron's planet is his next target. Aron, realizing Leia was right about the Empire, vows to fight, and make him rue the day he ever set eyes on Aron's world.

Firsts and Other Notables
This issue kicks off a two-part story that is a re-purposed leftover from Marvel's John Carter of Mars series. As detailed here, when that series was cancelled in 1979, there were a few inventory stories left over in the metaphoric drawer. To not let one of those go to waste, Chris Claremont (who wrote the original Carter inventory story and is something of this series' unofficial backup writer at this point) and Walt Simonson were tasked with transforming one into a Star Wars story, and the end result is this issue and the next, with the pair providing a few new introductory pages to setup Leia's entry into the tale, then tweaking the existing pages as necessary to work her into the narrative.

Coincidentally enough, the Carter inventory story was drawn by former Star Wars artist Carmine Infantino (and Simonson did his best to ape his style in the new material). Though the work here isn't quite the same as the wider, more angular look Infantino did for this series, it still provides a remarkable level of visual consistency to a story that is literally cobbled together from another series entirely.

This issue also features the first appearance of the TIE/br boarding shuttle. While it looks to be an inconsistent use of the TIE bomber design from The Empire Strikes Back, that design was actually created initially for A New Hope, intended to be a shuttle/landing craft of sorts for the Empire. When it didn't make the final cut of the film, it was re-used as the model for the TIE bomber. But I have no idea if Simonson used it here with that knowledge, or if he was just re-using the TIE bomber design to happy coincidence. 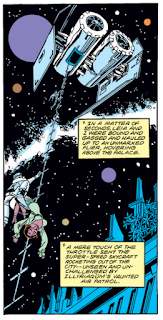 General Sk'ar, the Imperial general who captures Leia at the end of this issue, will later be established by a Hyperspace article to be a member of the Kaleesh species, the same species to which General Grievous belonged.

A Work in Progress
A pair of Stormtroopers in this issue, both on the cover and inside, are larger-than-normal, but no explanation is given. 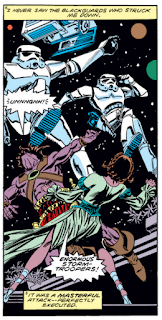 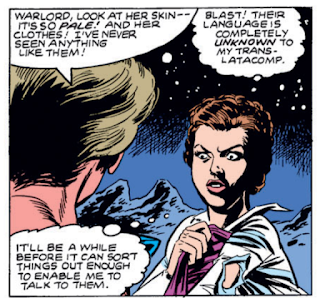 Um, Actually
Obi-Wan is described as the general under which Leia's father served in the Clone Wars, which has since been established as being not entirely true. 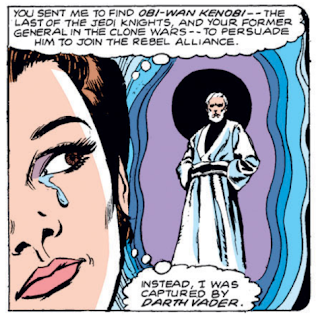 Claremontisms
The captain of Leia's ship uses "a body" in his speech. 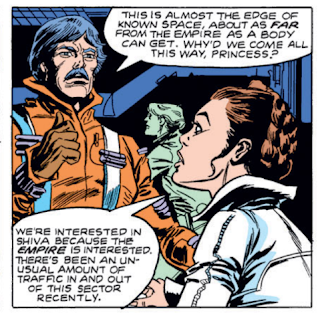 Remember Star Wars?
Mourning Alderaan, Leia provides a handy recap of the events leading up to its destruction. 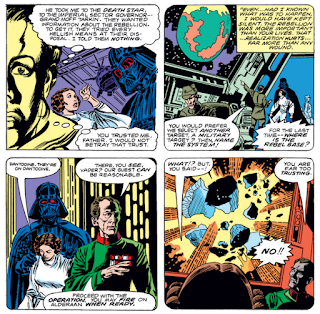 Leia recognizes both the effects of a nuclear bomb, and the Cherenkov Effect, a very-modern-day-Earth specific term. 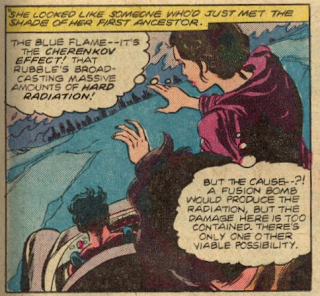 Austin's Analysis
Needless to say, this is an odd story. Cobbled together from the remnants of an entirely different sci-fi/fantasy series, there's something interesting simply in the exercise itself, of seeing how Claremont & Simonson work to fudge a John Carter story into a Star Wars one, and insert Leia into the already-penned narrative. All things considered, it could be much worse - the re-named world of John Carter presented here wouldn't seem entirely out of place in this series' earlier issues, when the universe of Star Wars was more undeveloped and thus, the settings of stories tended to be pulled from more generic sci-fi/fantasy concepts. And Claremont deserves props for turning this into a story about Leia's grief over the destruction of Alderaan, something long-ignored (even to this day) by the Expanded Universe, showing her grappling with the loss of her home planet and her role in its destruction in a way no other story really has. Frankly, it's something the series should have done much, much sooner.

But all that aside, the timing of this little exercise in corporate thriftiness, while not entirely devoid of merit and interesting in a technical, how-the-sausage-gets made sense, couldn't be more ill-timed, in terms of the series' overall narrative. After a string of standalone issues of varying quality (and tone and creative teams) following The Empire Strikes Back, the new creative team had finally debuted and settled in with the enjoyable (if disappointingly-short) "To Take the Tarkin". Now, immediately after seemingly setting the series off in a bold new direction, we get another fill-in story, one which (out of necessity, granted) again isolates the cast that had only appeared together in full once since Empire, and is entirely devoid of any of the series' ongoing narrative threads. As a relic of a time when Marvel was going use every story they'd paid for, whether the series' it was originally commissioned for existed or not, this is a fun curiousity. As the 53rd issue of the ongoing Star Wars series, it's another disappointment.

Next Issue
Leia and John Carter Aron fight the Empire.