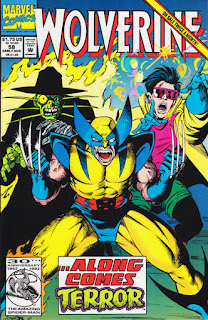 In a Nutshell
Wolverine teams up with Terror to locate a girl kidnapped by a cult-ish environmental group.

Plot
When a logging executive friend of Xavier's named Barton Hoff asks for help locating his daughter Alice, who was kidnapped by a group of environmental extremists called the Nature Defense League, Xavier is forced to decline to protect the X-Men's secrets. But Wolverine, looking for a distraction after Mariko's recent death, takes it upon himself to help the girl. He and Jubilee track a member of the group to an Oregon bar, where they learn Ecotage, a splinter group of the NDL, has captured Alice. Wolverine gets into a fight with one of the members, who kills himself rather than be captured. At the morgue, they rendezvous with Terror, an apparent acquaintance of Wolverine's, who uses his power to learn that Alice is being prepared for some kind of cult-like sacrifice. Just then, Monkeywrench, the leader of Ecotage, and his associates attack, and Wolverine is stabbed in the chest with an explosive spike.

Firsts and Other Notables
This issue kicks off a two-part fill-in story by DG Chichester and Darrick Robertson, guest-starring Terror, the star of Chichester's Terror, Inc. series. Created by Chichester under the name Schreck as part of Marvel's Epic line, Terror possesses the ability to absorb the skills and talents of other people via their dismembered limbs. 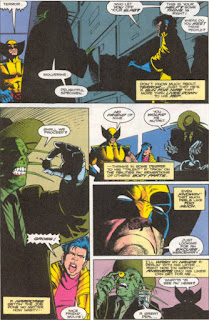 As of when this issue was published, Terror's solo series had began a month before this issue was on sale. Wolverine already knows him, though we never learn how or why they met.

Chichester is one of the more infamous editors-turned-writers from this era, as the company scrambled to find creators for their ever-expanding line of books. At this time, Chichester was also writing Daredevil & Nick Fury: Agent of SHIELD in addition to Terror, Inc.

The Chronology Corner
This story (this issue and the next) takes place after Wolverine #65, and we're still before the events of X-Men #8 and the subsequent Ghost Rider and Longshot stories in that series.

"Professor Xavier is a Jerk!"
Xavier refusing to help the worried father in this story in order to keep the X-Men's secret is kind of a dick move. It's not like anyone but the father would have to know the X-Men were involved, and Xavier could always alter his memories if it's that big a deal (and he already suspects a connection between Xavier and the X-Men). Even Xavier turning the father down, then tasking Wolverine with the mission would be better.

The Grim 'n' Gritty 90s
Two things that could only happen in the 90s: recording shirtless Luke Perry on videotape.

The idea of an extremist/terrorist environmental group seems very 90s, in a Captain Planet kind of way.

Austin's Analysis
I don't think I've ever read a story with Terror in it before, but there's arguable no character better representative of a narrow time in Marvel history, when they were glutting the market with as many books as possible, and filling the pages of those books with lackluster art and workmanlike stories crafted by editors working as writers. Characters like Cable, Venom and Bishop are representative of their time, but they also stood the test of time, and remain viable characters (to varying degrees) today, and they represent a specific kind of trend in the industry. Whereas characters like Terror (and Darkhawk and Sleepwalker) are barely remembered as footnotes today, representatives not of a prevailing style or attitude of the time, but of a market force, the ability of the speculator bubble to sustain even subpar series for a year or two while Marvel desperately tried to shore up their numbers with quantity when quality wasn't enough.

All of which is neither here nor there for this issue, the kick-off to a two-part fill-in story. It's a shame we're getting yet another fill-in story, so soon after #54 and in the immediate aftermath of Mariko's death (which gets paid lip service here, but deserves much more of a reaction from Wolverine). Thankfully, Darick Robertson, who also did issue #54, provides better-than-average art for a fill-in, and the story is reasonably competent and something a little bit different than the usual Wolverine fare, if not terribly exciting or captivating. Terror is, ultimately, the most interesting thing about this story, just for the way he ties it to such a specific, unique time in Marvel's history.