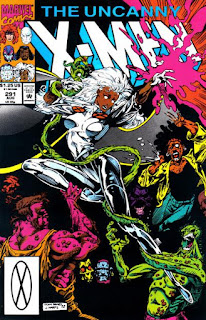 In a Nutshell
Callisto returns as the Morlocks prepare to attack the surface world.

Plot
Late one night, a badly injured Callisto and the Morlock Healer arrive at the mansion. Reading Callisto's mind, Xavier learns they were attacked by Morlocks after the Healer tried to enlist Callisto's aid in leading them after Masque's recent death. Xavier insists the X-Men must help the Morlocks break this cycle of violence, though Mikhail, who someone managed to join Xavier's psychic link, disagrees. As the X-Men debate their course of action, the Healer uses the last of his strength to heal Callisto, in the process restoring her original appearance, and she vows vengeance on the Morlocks. Meanwhile, a mysterious figure visits an incapacitated patient at a nursing home whom he calls humanity's last hope. That night, the X-Men, including Professor X, enter the Morlock Tunnels to find the Morlocks tearing themselves apart. Back at the mansion, Iceman, who stayed behind to guard Callisto, is confronted by Mikhail, who demands Callisto be released. In the tunnels, as the X-Men try to stop the Morlocks from killing themselves, a group swarms Storm, triggering her claustrophobia and causing her to blast a route to the surface, out of which the Morlocks pour.

Firsts and Other Notables
Callisto, last seen after being given a makeover by Masque cuddling up with Colossus as "Peter Nicholas", returns this issue, along with the Morlock Healer (last seen on Muir Island during the Reavers' attack in issue #253-255), who uses the last of his life to heal Callisto, which reverts her to her previous, less attractive look. 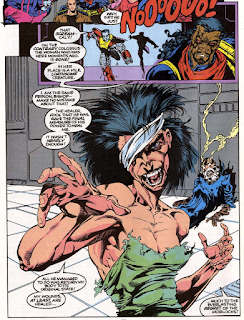 In a brief subplot page, we see an individual visiting someone in a hospital. This will eventually turn out to be Stephen Lang, one-time creator of Sentinels, who after his appearance here will be used to help the Friends of Humanity (his visitor here emphasizes the word "friend", seemingly a nod towards that yet-to-be-created group) create the Phalanx, techno-organic beings (like Warlock) who will menace the X-Men in the "Phalanx Covenant" crossover. However, I don't think Lobdell had any of that in mind when writing this issue, thus making this the first instance of what will become a signature style of Lobdell's: introducing a mystery just for the sake of a mystery, with no specific idea in mind for how to pay it off at the time it's introduced (see also: Onslaught). 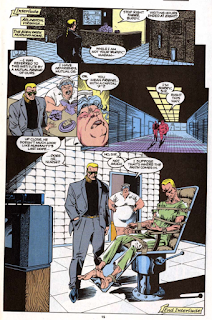 I remember being obsessed with this mystery as a kid; "Phalanx Covenant" is only a few years away, publication time, but reading these in real-time, that was a long time, and it felt like whatever mystery this was meant to tease was left dangling forever back then.

Tom Raney provides the art for this issue (and the rest of the story). He's billed as a guest penciler, but the truth is, the series has no regular artist at this point (Brandon Petersen will come aboard with issue #294 and still around for six issues before giving way to a short return run for John Romita Jr.).

A Work in Progress
More bad footnoting, as nobody could be bothered to look up when Callisto last appeared. 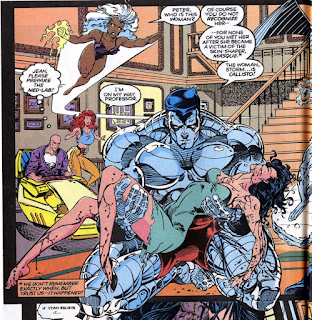 Mikhail is seeing more visions of dead people, and ends the issue confronting Iceman and allying himself with Callisto. 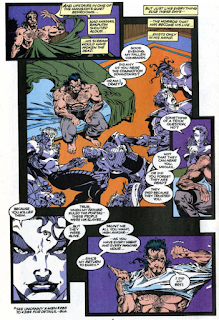 It's noted that Masque warped the minds of the Morlocks as well as their bodies (which isn't really how his power ever worked before but does make for a nice explanation of why they'd follow him). This issue also acknowledges his death over in X-Force. 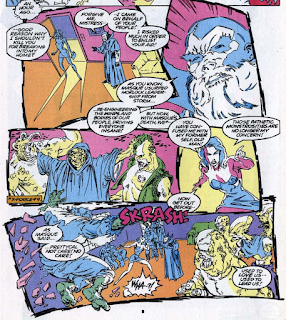 Archangel argues that his transformation is a direct result of the X-Men not giving the Morlocks the attention they deserve. 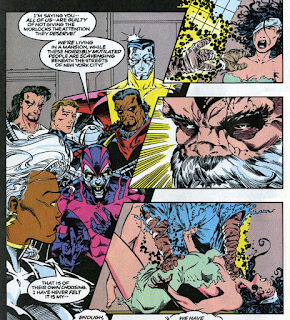 Bishop recognizes one of the radiation signs in the Morlock Tunnels from when he discovered Jean Grey's message in the future, from Uncanny X-Men #287 (though the footnote is, once again, wrong). 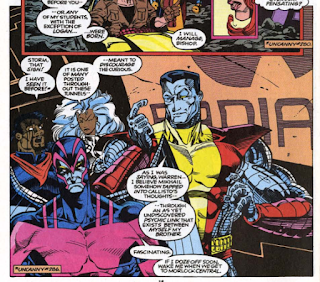 Storm compares her leadership of the Morlocks to her relationship with Forge, casualties of her efforts to secure her place with the X-Men. 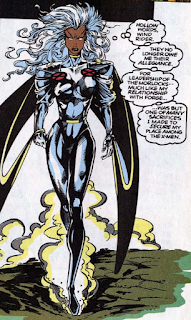 The Reference Section
Frankly, the most outlandish thing this issue is the narration's assertion that the mansion reverberated with laughter as a result of Jay Leno's monologue.

Bullpen Bulletins
This month contains the last Cool-o-Meter, one which ranks things that include "cool" in the name.

For Sale
The third series of Marvel Universe trading cards has an ad in this issue. 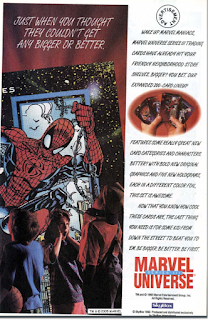 Austin's Analysis
This issue kicks off a three-part "Scott Lobdell Gets Rid of Mikhail Rasputin and Tries to Wipe Out the Morlocks, Again" story, and it's a bit of an odd one, sandwiched between the brief Image Era and the "X-Cutioner's Song" crossover that does its best to tie off that era and start a new one. As a result, it feels very fill-in-y, with a "guest" artist required to cover the gap while Marvel scrambles to fill the void left by the Image Exodus, even though the story is actually accomplishes something somewhat significant in, for the most part, getting rid of the Morlocks for a good long while.

It's also something of a throwback, a traditionally-structured three-parter featuring the whole team in action (even Professor X goes out in the field). And as much as the start of the Image Era on this series was about a break with the past, Lobdell continues, as he did in the previous two issues, to show at least a cursory familiarity with X-history and a willingness to use it, as he brings back Callisto and references her brief relationship with a post-Siege Perilous Colossus to set-up her partnership with narrative anchor Mikhail, and using her as the entry point into the larger Morlock story.

Next Issue
Tomorrow, X-Force vs. Weapon: Prime, the fight no one wanted, in X-Force #13. Friday, X-Factor vs. Cyber in X-Factor #81. Next week, Jim Lee says goodbye in X-Men #11.
Newer Post Older Post Home
Posted by Austin Gorton at 12:00 PM