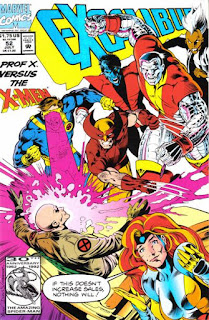 "All You Ever Wanted To Know About Phoenix...But Were Afraid To Ask"
July 1992

In a Nutshell
With the help of Professor X & Jean Grey, Excalibur learns the truth about Phoenix's relationship with Rachel.

Plot
After seemingly encountering various X-Men from anachronistic times at the X-Mansion, Professor X wakes up in Braddock Manor, stunned to learn ten hours have passed since he projected his mind into the mind of Phoenix. With Jean's help to break down Phoenix's defenses, Xavier then projects Excalibur into Rachel's mind, where the Phoenix proceeds to share with them its history: from birth to its encounter with Feron & Necrom, then, much later, Jean Grey; it's subsequent "death", after which it first encountered Rachel, who had sent her mind back in time, and learned of her horrific future; how it sent a portion of itself back to the future with Rachel where, at the urging of Kate Pryde, used its power to send Rachel physically back in time and suppress her memories. When Excalibur asks where Rachel is now, Phoenix explains that while her physically body has been healed, her mind is still shattered after the encounter with Necrom, and Phoenix, having learned the hard way, is reluctant to try to repair it. So Phoenix is protecting Rachel's psyche until it heals itself. Returning Excalibur to the physical world, Phoenix, in control of Rachel's body, flies off into space. Meanwhile, a pair of police officers investigate the disappearance of all the people from a small, northern hamlet, as they are unknowingly watched by the Crazy Gang.

Firsts and Other Notables
Though she's been in a coma since issue #50, this issue marks Rachel departure from the series for the foreseeable future (about ten issues), as the Phoenix Force flies off into space with her body. 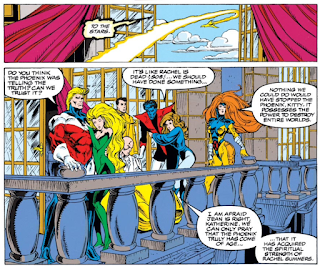 After several false starts and teases (including issue #41 and XX Crossing), Excalibur finally interacts with some honest-to-goodness, real-deal, not an illusion, not fakes, not alternate counterpart X-Men. Granted, little is made of that in the story (it would have been nice to see Kurt & Kitty react to Professor X being paralyzed again, for example), and the cover is another huge misdirection, but still, it finally happened. 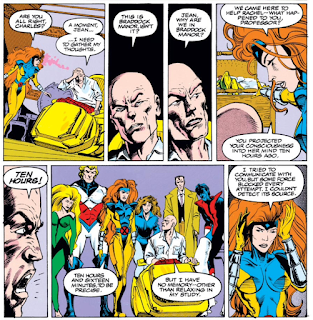 As, essentially, a history of the Phoenix and its relationship with Rachel, this issue reveals and retcons a fair amount of information. Most significantly is the idea that Rachel's telepathic and telekinetic abilities were inherited from her mother, while her actual mutant power is the ability to transport minds through time (which is how she was able to send Kate Pryde back in time in "Days of Future Past"). It's not a terrible way to explain her otherwise-random time travel abilities, though it doesn't quite fit with how we understand Marvel's mutants to work (they general don't "inherit" a power and also get another, different power) and is, I believe, mostly ignored by later writers. 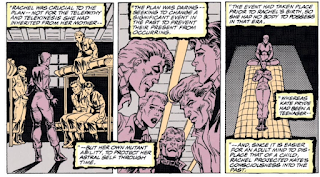 Another big reveal/retcon (depending on how you look at it) is how Rachel first came to the attention of the Phoenix Force. Here, it's said that, after Kate Pryde returned to the future, Rachel sent her mind back in time to find out why their world hadn't changed. The Phoenix Force, reeling after its physical death in "The Dark Phoenix" and seeking to return the consciousness it took from Jean, is drawn to Rachel as well, and a portion of it returns with Rachel to the future (all of which ignores, but doesn't contradict, anything involving Madelyne Pryor, who also accidentally received a portion of the Phoenix at this time). 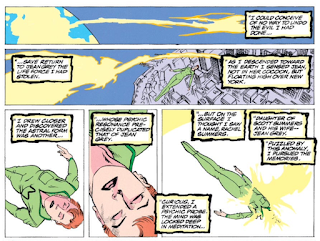 So in the future, it's the Phoenix Force which enables Rachel to go back in time physically (since her power only affects minds), and thus, Phoenix is always with Rachel from the moment she arrived in the present in New Mutants #18 (which seemingly contradicts Rachel's adoption of the Phoenix Force in Uncanny X-Men #199, but doesn't, really - it just makes it about her accepting the power and its legacy).

This issue also establishes that the Phoenix Force scrambled Rachel's memories at the request of Kate Pryde, but that's just out and out wrong - Rachel didn't have any memory problems until after her encounter with Spiral and subsequent trip into Mojoworld (there's a line about Rachel was strong and would occasionally remember things, but that doesn't really fit with how Rachel was presented pre-#209. She was crying all the time about the future she came from!). 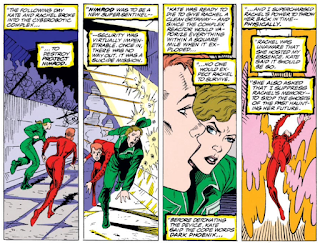 Phoenix also says that it and Rachel are now irrevocably merged; future stories will show that to be less than true.

A Work in Progress
Captain Britain seems to suggest that the colored effects used in comics to indicate the usage of telepathy/telekinesis are actual physical manifestations to the characters as well.

A couple more details are added to the "Days of Future Past" setting here. It's confirmed that Rachel was put into a concentration camp (where she first appeared in X-Men #141) after fighting off her programming as one of Ahab's Hounds, and is responsible for crippling Ahab in the process. 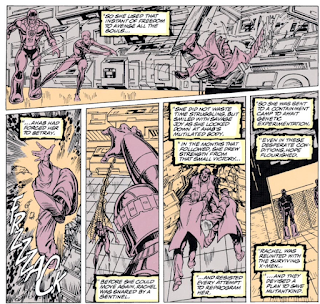 It's also established that in the DoFP future, Mastermind set off a nuclear bomb which destroyed Pittsburgh, an event that motivated the army into action against mutants and, specifically, the X-Men, which seems like something maybe Kate Pryde should have also mentioned during the whole "stop the assassination of Robert Kelly" thing. 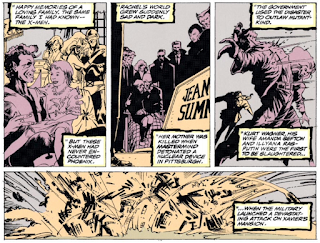 Phoenix tells Jean that it has removed every trace of its power from her, but can't take back the memories it gave her when Jean was revived.

Austin's Analysis
Alan Davis' vehicle for writing Rachel out of the series for a time disguised as an issue-long Marvel Saga-style history of the Phoenix Force, this is pretty much one big infodump of expository information, tying together some (but not all) of the pre-established beats in the history of the Phoenix Force with the newer stuff Davis introduced in issue #50, while also attempting to streamline and clarify Rachel's history (to mixed results). On the surface, there's nothing wrong with a little exposition now and then, even something as dense as this; certainly, the Phoenix Force is something that could use some straightforward clarity. But while I try not to let future happenings influence my opinion on an issue before they happen, it's hard to get too invested in much of this, given how much of it is later retconned itself or outright ignored (and some of it, like Phoenix suppressing Rachel's memories from the beginning of her time in the present, simply doesn't work, even without the benefit of hindsight). So while I applaud the effort and can forgive the format, it's still hard not to feel like this is kind of a waste of an issue, in the grand scheme of things.