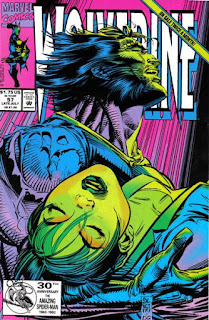 Plot
Wolverine, Mariko, Gambit & Silver Samurai retreat from the Hand into the Yashida mansion, which is heavily bobby-trapped. Outside the complex, Silver Fox & Reiko meet with Matsu'o. Silver Fox tells Matsu'o that Reiko is the means to his victory, while Jubilee & Yukio attempt to get into the mansion through the roof, but find they are not alone. Shortly, Reiko proceeds inside the mansion, her blindness helping her through the traps. Matsu'o is worried her obligation to Wolverine will foil their plan, but Silver Fox insists Reiko doesn't know about his relationship with Mariko. On the roof, Yukio & Jubilee encounter Cylla, drawing Wolverine's attention. He goes to fight Cylla, while Reiko extends Mariko an offer on Matsu'o's behalf: he will buy her underworld holdings, thus divesting the clan of its criminal elements without bankrupting it, in exchange for Mariko offering atonement in the Yakuza manner, by cutting off one of her fingers. Reiko offers a blade, stabbing herself to prove it's not poisoned, and Mariko agrees. Outside, Silver Fox admits to Matsu'o that she arranged for Cylla to distract Wolverine, while Mariko cuts off her finger. Immediately she cries out in pain, the blade poisoned with a toxin to which Reiko is immune. At Mariko's cries, Wolverine goes back inside, and Reiko, realizing what Mariko means to Wolverine, kills herself. Wolverine brings Mariko to the Yashida chapel, where she asks him to use his claws to end her suffering. On the roof, Jubilee & Yukio fight off Cylla, just as Wolverine emerges from the chapel, carrying Mariko's body.

Firsts and Other Notables
Mariko dies this issue, mercy killed by Wolverine to spare her a long, painful death by blowfish toxin after she was poisoned by Reiko at Matsu'o & Silver Fox's behest. Though she hasn't been around much of late, it still marks a tragic end for a character that dates back to the classic Claremont/Byrne days. Hallucinatory and alternate reality appearances aside, the character has remained dead. 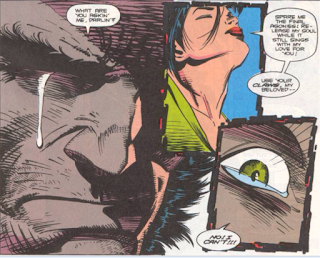 This is the issue of the series drawn by Marc Silvestri, as he too leaves Marvel to join his fellow X-artists over at Image, ending a run on this series that goes back to issue #31 and with the character that goes all the way back to Uncanny X-Men #218 (barring fairly consistent fill-in work, of course), which is a pretty remarkable artistic run for any character/series.

Mariko asks Wolverine to wear his old brown-and-orange costume in defense of her home; not sure why that is, unless Silvestri just wanted to draw him in that costume one last time. 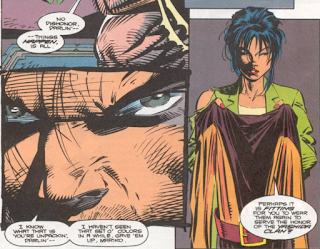 A Work in Progress
This issue reveals that the ancestral home of the Yashida clan was heavily booby-trapped by Mariko's father Shingen. 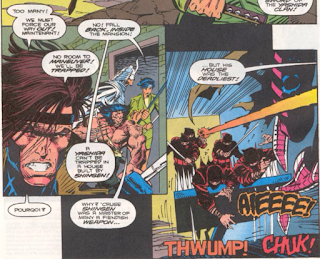 Matsu'o has had the hand Wolverine cut off in X-Men #7 replaced with a bionic one that is capable of being launched, not unlike Kane's hands. 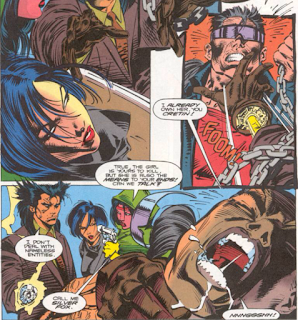 Austin's Analysis
I've always been conflicted about Mariko's death in this issue. On the one hand, she's barely been used since the mid-late 80s, having never appeared and barely been mentioned in this series prior to this story. Once it became clear that Marvel was never going to let one of its most popular characters get married, her and Wolverine's relationship stalled out, and even Claremont himself largely ignored it after that point, having Wolverine die and come back and perpetuate a ruse that he was still dead with nary a thought given to how it might effect Mariko, let alone showing readers her reaction to the news that he was dead, and then to the news that he was not. If the character isn't going to be used anyway, and won't ever be allowed to move her relationship with Wolverine forward, why not kill her off, and wring as much pathos out of it as possible?

On the other hand, killing a character is always tricky (an unused character can be dusted off with ease; a dead one, especially an otherwise "normal" civilian character, less so), especially when said character is, at least technically, the love interest of the main character (the event which gave us the phrase "Women in Refrigerators" hasn't occurred yet, but Mariko is very definitely fridged in this issue, her death occurring only because of the impact it will have on Wolverine). Mariko's lack of presence in Wolverine's life prior to this story also takes away a lot of the impact fridging her is supposed to have (if Wolverine's barely mentioned or thought of her in the previous 53 issues of his series, let alone all those concurrent and previous  X-Men issues, is her death really that big a deal to him?), as does the means in which it occurred (carried out by an agent of Matsu'o & Silver Fox, two relatively new characters with relatively young grudges against Wolverine; this is hardly Sabretooth, or even someone like Silver Samurai, getting a big win against Wolverine). It also doesn't help that, in hindsight, this loss won't really have that big an impact on Wolverine, aside from giving him someone who can appear in his dreams or alternate realities and be immediately suffused with extra meaning.

The best thing that can be said for the death is that by having Reiko be the direct agent of Mariko's death, it creates a nice bookend to the Hama/Silvestri run, using a character from their first story to close out their last, and the desire of the creative team to end a run that has revitalized this series on a big, impactful note is understandable. The issue itself is well-crafted, if a little dense; given how much of the previous issue was ninja-fighting filler, it would have worked better if some of this issue's plot machinations had occurred there, just to give some moments, like the reveal of Matsu'o & Silver Fox's ultimate goal, more room to breathe, and the ending is also abrupt, cutting from Wolverine refusing to use his claws on Mariko to him emerging with her dead body (so much so that I thought I missed some pages), and while the actual moment of her death doesn't need to be depicted the moment when Wolverine ceases his objections and decides to do what she's asking seems like an important one to show). There's also a definite feeling of almost Shakespearean tragedy infused into this issue, with the bad guys just straight up winning the day outright, which is rare but occasionally welcome in serialized fiction. There's no denying that Mariko's death is a loss for Wolverine; the impact of it, however, and thus the justification for it as well, would be greater if the series prior to this had done more to show just how tremendous a loss it is, instead of simply telling readers how big a deal Mariko is here, at the last possible moment.