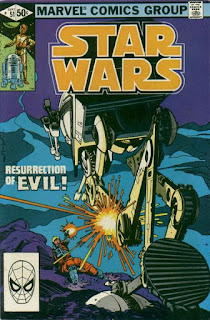 In a Nutshell
The Rebels learn of the Empire's new superweapon, the Tarkin.

Plot
After a fighter carrying Rebel Captain Tev's body & a message cannister reaches the fleet, General Rieekan orders an emergency recall of three specific warriors: Leia, Luke and Lando. Rendezvousing with the fleet, they're briefed on the information Tev died to get to the Rebellion: the Empire has built a new superweapon to replace the Death Star, dubbed the Tarkin. Lacking any obvious weaknesses, General Rieekan says the only way to destroy the weapon is from within, and who better to lead that mission than the only Rebels to have been aboard the Death Star and survived. Later, Darth Vader executes an Imperial officer for having failed to earlier capture Luke, while the disguised Rebels arrive on the planet supplying the Tarkin, where they are able to bluff their way onto a shuttle that takes them aboard the station. Once they arrive, however, Vader senses Luke's presence, and orders all security personnel away from the main reactor. Meanwhile, in the bowels of the station, a group of Imperial officers meet in secret, and, in light of the way Vader executes them for any mistake, vows that before the day is over, Darth Vader must die.

Firsts and Other Notables
This issue features the debut of the series' new regular creative team: writer David Michelinie (known for his later work as the writer on Amazing Spider-Man when Todd McFarlane came aboard), penciler Walt Simonson (known for his groundbreaking and revered run as writer/artist on Thor) and Tom Palmer (one of Marvel's all-time great inkers). Both Simonson & Palmer had contributed to earlier issues of the series, but this is the first that has all three working together, the start of a run that will last, barring a few fill-ins, until issue #68.

This marks the first appearance of the Tarkin (named after the Grand Moff who died presiding over the Death Star), the Imperials latest superweapon (described by the Rebels as a second Death Star), which keeps the Death Star's primary weapon but strips away a lot of the station's bulk, as well as addressing the kind of weakness that led to the destruction of the Death Star. It's a remarkably clever idea, putting the Rebel up against another Death Star with the first one's flaw accounted for, so much so that George Lucas does the same thing in Return of the Jedi. In fact, it's kind of shocking that LucasFilm let Marvel do this story at this point in time, given that Jedi was undoubtedly in development and the idea of using another Death Star surfaced fairly early in the film's conception (in fact, originally, Lucas was going to have two new Death Stars in the movie). Maybe they felt that while the Tarkin is, essentially, a new Death Star, it technically isn't, and the differences were enough to prevent it stepping on the toes of the later film. 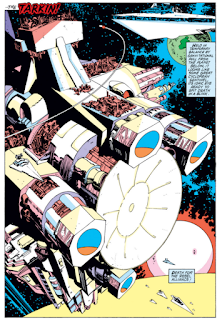 In addition to the Tarkin, this issue also introduces a secret cabal of officers within the Empire determined to remove Darth Vader from power, as a result of his penchant for executing them over any slight, real or perceived. Like the Tarkin, it's another smart development for the series, this time building off a running subplot from Empire. 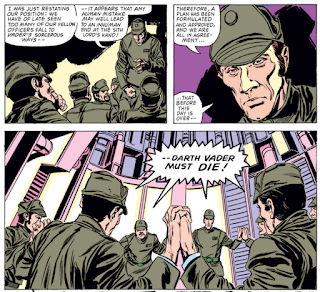 A Work in Progress
General Rieekan, the Rebel commander on Hoth in The Empire Strikes Back, is revealed to have survived the Battle of Hoth and is now considered the Rebel supreme commander. 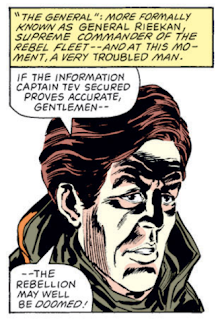 The Rebels are still looking for a new post-Hoth base, despite apparently having found one last issue.

There's another utterance of "I've got a bad feeling about this". 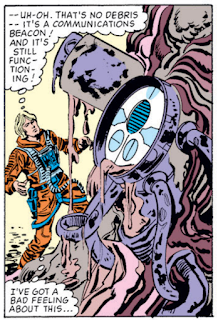 Lando & Chewbacca are chasing down someone named Shem-Lern, who apparently as info on Han's whereabouts, when they're called off the search to address the Tarkin situation. 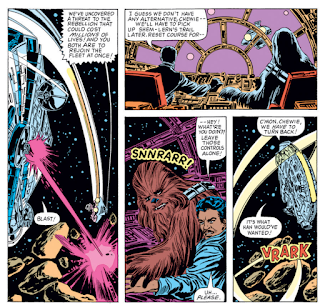 During the briefing about the Tarkin, Luke is surprisingly cavalier about the whole thing, lounging in his chair. 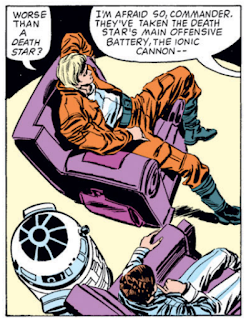 Leia is especially frosty towards Lando, which makes sense given the events of Empire (but less sense given that we saw no indication of that frostiness in the preceding post-Empire issues). 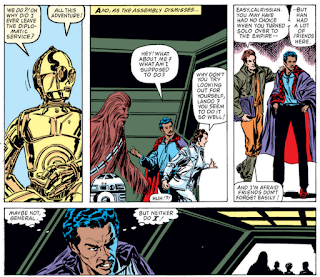 Luke is able to use the Force to trick the Imperials into letting the Star Warriors onto a shuttle bound for the Tarkin. 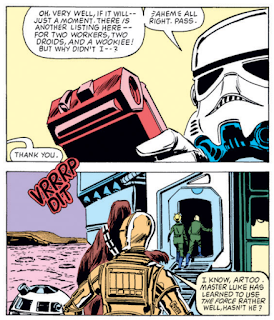 Um, Actually
Gundarks, the creatures famously referenced in The Empire Strikes Back as representations of strength ("strong enough to pull the ears off a Gundark!"), appear for this first time in this issue, but they barely resemble later depictions of the species, which are consistently more humanoid (oddly enough, these Gundarks don't even appear to have ears, which is pretty much the ONE thing we know about them at this point in time). 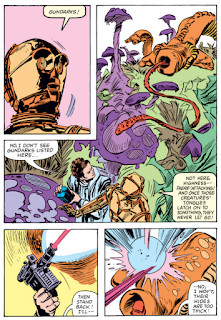 Artistic Achievements
In's a small panel in the middle of the page, but this shot of Leia wielding a blaster is probably the most Simonson-y thing in this issue. Good stuff. 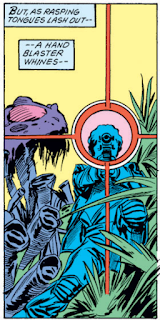 Austin's Analysis
With each passing month, the issues released in the immediate wake of Empire up to #50 read more and more like inventory/filler issues dusted off to fill the gap before the Michelinie/Simonson/Palmer team could fully come together. This issue kicks off their run by bringing the core team of heroes (our Star Warriors, if you will) back together in one of those "duh!" plots it's surprising the series hasn't done already: the Empire is building another Death Star-esque superweapon, and who better to take it out than the people who played the biggest role in destroying the last one? Not only does this work to justify putting all the main characters together in the same story, it's also a big enough threat to reasonably justify putting aside the search for Han.

Adding in the subplot involving the conspiracy of Imperial officers to oust Vader is also smart. It adds another layer of complexity to the story, while also positioning Vader as something other than the series' Big Bad, not quite a hero but at least a protagonist in his own right, with a conflict to overcome independent of Luke and company. Given the likely restrictions placed on his interactions with the main heroes at this time, it's a clever way to keep the villain in front of readers without watering down any future confrontations with Luke. All in all, this issue is a strong start to a new creative era for the series, and coming on the heels of the similarly-strong previous issue, helps it feel like the book has finally shaken out of its meandering post-Empire doldrums.

Next Issue
To take the Tarkin!