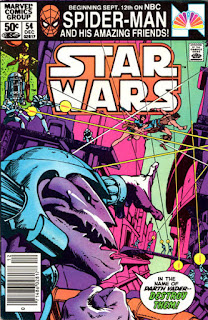 In a Nutshell
The Star Warriors rescue Leia and help defend Shiva IV.

Plot
After detailing his plan to use an anti-matter bomb to destroy Aron's kingdom, General Sk'ar order Aron & Leia put in a cell. En route, they break free of their bonds and steal an air ship. Pursued by TIE fighters, they end up crashing the ship on Sk'ar's battle cruiser. Leaping out, they engage the Imperial forces, but just when they're about to be overwhelmed, Luke, Lando, Chewbacca & Aron's ally Keral join the fight. As Leia races to defuse the anti-matter bomb, Lando chases Sk'ar onto a shuttle, which Chewbacca manages to down just as Leia deactivates the bomb. During the ensuing celebration of their victory, Threepio informs Leia that a Star Destroyer has entered the planet's orbit. The Star Warriors leap into the Millennium Falcon and prepare to take on the Imperial ship, despite being overmatched. However, a nearby black hole gives Luke an idea, and with the aid of the Force, he pilots the Falcon around the edge of the hole, a maneuver the Star Destroyer attempts to match, but cannot, due to its greater bulk. As the ship and all aboard are destroyed, the Falcon races away, having ensured the freedom of Aron's world, at least for a time.

The cover of this issue is the first of the series to feature the loud and annoying banner ad for Spider-Man and His Amazing Friends that besmirched all of Marvel's covers around this time.

A Work in Progress
Early in the issue, Leia is mischaracterized a bit as she freaks out having killed an Imperial soldier trying to kill her. It comes up a bit later as a larger sub-theme about not being too cavalier about the deaths of enemies, but I assume this is more down to Claremont trying to work with what the existing art was giving him.

At one point Leia shows off her flying skills, saying she learned them from Luke.

Um, Actually
The black hole which consumes the Star Destroyer at the end of the issue is depicted as, uh, a large black hole in space. 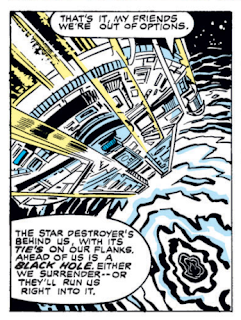 Remember Star Wars?
Leia's torture at the hands of Darth Vader in issue #2 of the series is mentioned. 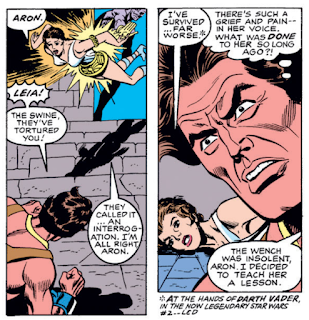 Later, Luke recalls the medal ceremony on Yavin Four that closed out issue #6/the movie.

Young Love
Despite being married (and acknowledging as much), Aron falls head-over-heels for Leia, to the point that it's kind of icky, and that he's insanely jealous of just the concern for Luke he hears in Leia's voice. But eventually, he comes to terms with the fact that he can love Leia even if she doesn't love him back, then returns to his poor, poor wife.

You Kiss Your Sister With That Mouth?
In addition to all the "Aron is jealous of Luke" business, Luke himself ponders that perhaps he and Leia's feelings for each other will develop into "something more than friends", and even disregarding the whole sibling thing, that seems like a dick move given that Leia's actual love interest and Luke's best buddy is currently trapped in carbonite en route to a vile gangster. 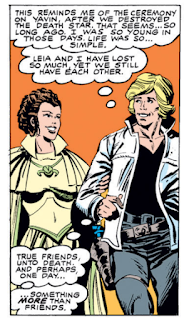 For Sale
There's an ad for an Empire Strikes Back model kit in this issue. 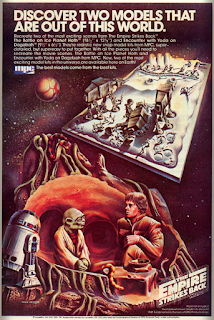 Austin's Analysis
Thanks in part to the leftover John Carter material seemingly running out about halfway through the issue, and in part to the inclusion of more Star Wars characters than just Leia, the second half of this story helps the whole thing feel more like a Star Wars story and less like a worked over re-telling of another series' story. Thanks to that, the plight of Aron and his world reads much more like the kind of "Rebels help a planet resist the Empire" plot that is this series' stock in trade. The Leia-mourning-Alderaan thread that made the previous issue compelling gets lost a bit here (at one point Leia compares the threat to Shiva IV to the destruction of her planet, and it comes off a bit forced), but the presence of Luke, Chewie, Lando and the droids, along with a legitimately engaging dogfight with a Star Destroyer, helps make up for it, and in the process smooths over some of the story's more economically-mercenary origins.