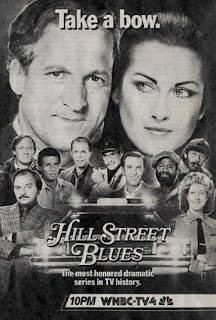 Even as a show on its last legs, Hill Street Blues opens Season Seven with a string of memorable episodes.  When Hill Street is at its best, the hallmarks of a David Milch cop drama are all present -- conflicted heroes, clashes between principled intellectuals and the men stuck in the trenches, and Dennis Franz stealing most of the scenes.  The middle stretch of episodes aren’t as good; many of the character subplots just aren’t that engaging, and the gimmick of placing a lead in jeopardy is overplayed (characters on Hill Street can be shot or even dismembered but still turn out okay within an episode or two).  Most of the major plotlines are still worthwhile, however, with Captain Furillo’s strained relationships with both Ray Calletano and Henry Goldblume becoming the focus for much of the year.

Lt. Henry Goldblume, previously Furillo’s sounding board and loyal second-in-command, grows increasingly disappointed in Furillo’s recent tendency towards pragmatism.  Actually, by the end of the season, he’s disillusioned with the entire system.  Goldblume’s still the idealist the audience met in the pilot episode, while Capt. Furillo seems to have a more realistic view of what’s needed to clear a case, maintain peace in the community, and placate his superiors.  Lt. Goldblume is still a TV writer’s fantasy of what a thinking man’s police lieutenant should be, while Furillo’s evolved into something else. 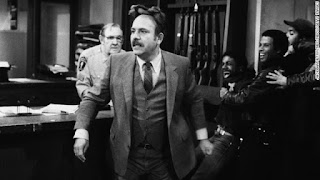 Ray Calletano, another character who goes back all the way to the pilot, was written off the show in the previous year when he became Captain of his own precinct.  This season, he returns for a series of episodes, which establish that Ray’s kind demeanor doesn’t lend itself to command.  After inheriting a precinct fraught with racial tensions, Ray is able to unite both black and white officers in one regard -- they all hate Ray Calletano, who’s been saddled with the derisive nickname “Captain Taco.”  Police Chief Daniels is ready to relieve Ray of command, placing Furillo in the middle.  Furillo ultimately sides with the Chief (an interesting direction for the story to go, given that Police Chief Daniels is usually painted as ignorant and coldhearted), and suggests Ray resign.  Ray feels betrayed, but ultimately makes his peace with Furillo.  However, a later attempt by Ray (who becomes a Latin community activist) to get back at Daniels actually ends up placing Furillo’s career at risk.


The conflicts with no easy answer, and rarely a pure villain in sight, will go on to define much of Milch’s television work. 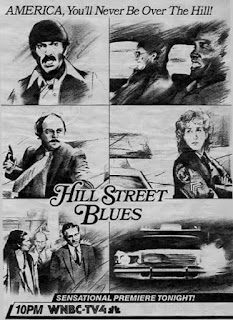 Season Highlights
As I mentioned earlier, the strongest episodes of the year tend to be the opening ones.  “Suitcase” has Sid the Snitch leading Lt. Buntz to a suitcase packed with millions of dollars worth of cocaine.  Sid knows what to do with it -- sell the “soda” to his contact and then move to a tropical location -- but Buntz is aggravated with even the suggestion.  The conclusion of the episode, however, makes it clear to the audience that Buntz isn’t entirely certain he made the right decision.  (And the final two episodes of the series will raise doubts regarding Buntz’s handling of the suitcase.)


“A Case of Klapp” and “The Best Defense” pits the Hill Street police against the Public Defenders’ office, specifically Captain Furillo’s wife, Joyce Davenport.  She participates in an intentional work slowdown as a protest against city cuts in their workforce.  One of her delaying tactics has Sgt. Belker called away from an undercover assignment so that he can testify in a minor drug hearing.  The consequence of pulling Belker off the case literally gets someone killed.  (Joyce is just so principled, however, she doesn’t seem that fazed.)


“Fathers and Guns” is a melancholy look at the family life of Capt. Furillo, opening with him receiving a call that his father has been killed during a home invasion.  The local police can’t find the murder weapon, however, and within the hour Furillo has discerned the real truth -- his father, secretly living with a terminal brain tumor, took his own life.  Furillo’s devoutly Catholic mother hid the gun and filed a false police report.  Furillo struggles with revealing the truth, as the local police search for a phantom killer.  The episode strongly evokes the first season of NYPD Blue, in the best possible way. 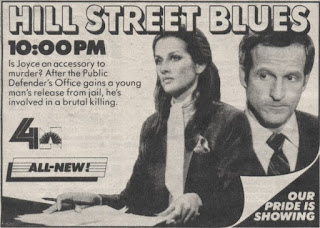 The most famous episode of the season, and perhaps the entire run of the show, is David Mamet’s contribution, “Wasted Weekend.”  I’ve read conflicting reports on how Mamet ended up writing the episode; some say that he’s old friends with David Milch and wrote it as a favor (provided his then-wife Lindsay Crouse, who played Officer Kate McBride in a few episodes last season, could return.)  Reports at the time say that executive producers Jeff Melvoin and John Litvack offered him a script after meeting him on the set the previous year.  Regardless, the episode marks Mamet’s television debut.  The episode divides fans, although it was well received by critics when it aired.  I think many fans were irritated by the basic premise -- Sergeant Jablonski and three other cops from the precinct are taking a long weekend to travel into the woods and hunt deer.  Now, is this something inner-city cops actually do?  With the exception of the extremely country Andy Renko, it’s hard to imagine most of these cops having ever stepped a foot into the woods.


Deer hunting is used by Mamet as a vehicle to discuss larger issues relating to violence, survival, and death.  The lead subplot in the episode has Lieutenant Buntz comforting (in his inimitable style) Officer Kate McBride, who’s still in shock after killing a suspect.  Another storyline has Lieutenant Goldblume delayed from the hunting trip through a series of absurd circumstances, culminating with him pleading with an unstable carjacker to spare his life.  The normally warm and cuddly Sergeant Jablonski tells a story about the first life he took in WWII, and the lie he’s chosen to live with ever since that day.  The ending is a little much (Jablonski allows the one deer they corner to escape, deciding to spare at least one life on this particular day), but it’s undeniably a strong episode.


By the way, Mamet later published this script, along with four rejected television scripts from this era, in the book 5 Television Plays.  All of the pages featuring his now ex-wife Lindsay Crouse’s character were cut from the book.


Season Lowlights
Two episodes this year have Detective/con man/ladies’ man J. D. LaRue participating in ridiculous radio contests, such as discovering the largest cockroach in the city.  Most of the LaRue/Washington plots this year are filler, actually.  Even in the series finale, LaRue is stuck running a silly scam instead of working a real police case.  Also, the joke of Sgt. Belker wearing wacky outfits while on undercover assignments was never particularly funny, and this year is no exception.  The fast-food pirate outfit he sports this season stands out as one of the worst I’ve seen, however.


Hey, Isn’t That...?
Cuba Gooding, Jr. plays a street punk brought in for having a .22 in his car.  He’s totally uncredited in his first appearance, but when he returns briefly in a later episode, he’s credited as “second gang member” in the closing credits.  Chazz Palminteri plays, I’m shocked, an Italian mobster named Sonny Cappelito.  CCH Pounder and James McDaniel (Lt. Fancy!) both appear in a “very special episode” on racism.  James McDaniel plays a uniform cop who’s convinced that the department is covering for a white officer who killed his black partner.  Don Cheadle plays Darius, a mentally unstable man who continually harasses his mother and sister.  Keenan Ivory Wayans plays a football hero caught during a prostitution sting.  Finally, Bryan Cranston takes a break from hemorrhoid relief commercials to play the police union lawyer assigned to Lt. Buntz’s case in the final episodes.


I Love the ‘80s
Episodes this year reference the scare surrounding poisoned Aspirin bottles (this paranoia also made its way into an early Cloak & Dagger comic), Geraldo’s investigation of Al Capone’s vault is parodied in the final episode, Captain Furillo is shocked by the thought of a condom machine in the men’s room, and Sgt. Belker is haunted by dreams of a nuclear holocaust.  Belker actually decides to call the White House to speak to the President about the issue.  He’s stunned that no one will put him on the line with Ronald Reagan, although the episode ends with him dreaming about what the President would say to him.  Finally, Lt. Goldblume’s friend declares his life is in shambles when he loses several pages of his manuscript, which was tossed into the street by a group of thugs.  Digital copies weren’t uncommon in 1986, however.  Also, if he was shopping this novel around, he surely had more than one physical copy. 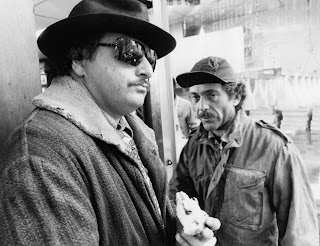 What Was The Point of THAT?
Officer Patrick Flaherty is introduced as a new transfer with an intense hatred of Lt. Buntz.  This is never followed up on.  In fact, Flaherty willingly donates money to Sid the Snitch, who’s taking up a collection to help the suspended Buntz in the final episodes.  When another cop mentions that they hate each other, Flaherty just shrugs off the grudge. 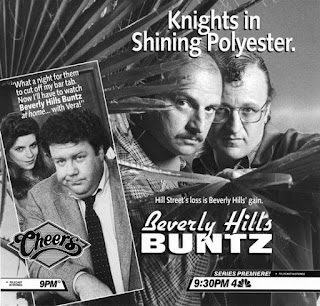 Next Time - NYPD Blue carries on, while Milch has one foot out of the door.