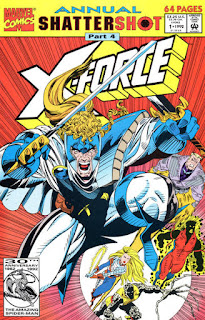 In a Nutshell
A future iteration of X-Force returns to Mojoworld to help set Shatterstar's reign right.

Plot
On Mojoworld, the Spineless Ones battle bipeds in the arena for sport, overseen by the new Master Programmer, Shatterstar. Meanwhile, Arize and a pair of Spineless allies arrive on Earth, seeking the help of the X-Men to undo what they did when they helped install their former teammate in power. Disturbed to learn that Shatterstar now oversees a regime as bad as the ones run by the various Mojos through the years, Cannonball and his X-Men agree. They arrive in the midst of another arena battle, and the sight of Arize and his former teammates fighting for the Spineless Ones motivates Shatterstar into action against his nefarious Master Scheduler. In the wake of his victory, Shatterstar agrees to build a new world, one governed not by ratings but true democracy, a decision which pleases a watching, aged, Longshot, and which reminds Cannonball that no matter how hard it is, freedom is always worth fighting for.

2nd Story: Though he won't admit it to Artie & Leech, Taki has a crush on their teacher, Mrs. Huntington. Though he's motivated by jealousy, he soon discovers her boyfriend Patrick is part of an anti-mutant organization and is just using her to find information on the mutants at the school. He, Artie and Leech work together to expose him, and when he sees a saddened Mrs. Huntington the next day, Taki tells her that if she waits a few years, he knows a really cute guy who would be interested.

3rd Story: Cable briefs X-Force on their top villains, but triggers outrage in Cannonball & Boom-Boom when he declares the X-Men and their conflicting ideologies as their biggest threat.

Firsts and Other Notables
Set in an alternate future, this issue features a few notable alternate future characters amongst its cast. First is Powerpax, a descendant of (presumably) one of the Power Pack kids, who possesses all their abilities. 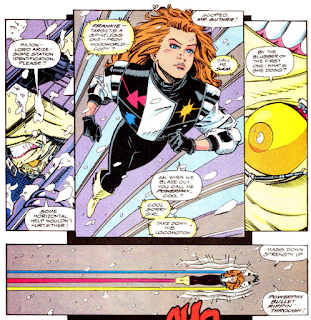 Then there's a teenaged Illyana (one who, apparently, aged in real time relative to her status as an eight-year-old in the present, since she refers to Cannonball as "Uncle Sam"). 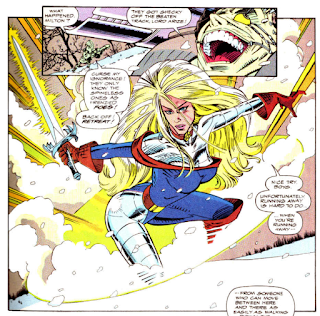 Finally, there's Cyberlock, an amalgam of the currently-deceased Warlock and Doug Ramsey, an oddly prescient character given that Douglock (who is basically the same character concept but with a different name) will debut in the pages of Excalibur not too long after this issue was published.

Sunspot is amongst the future members of the X-Men as well, which in hindsight isn't that big a deal, but probably seemed more impactful at the time, when he wasn't a member of the team and had made only sporadic appearances in the series.

To its detriment, the story isn't very clear on this, but presumably, the future Mojoworld seen here is at a point in time slightly later than the one from which Shatterstar initially fled in his first appearance.

In fact, a lot of what this story suggests about Shatterstar get muddled up by later revelations (and subsequent retcons) regarding Shatterstar's origins (for a time, he wasn't actually from a future Mojoworld, but then he was again, but he wasn't the child of Longshot, but then I think he was? I honestly have no idea what his "official" backstory is at this point).

The second story features Artie, Leech & Taki fighting an anti-mutant bigot at the boarding school where X-Factor enrolled them after "Inferno". It's a pretty routine story, but for fans of Simonson's X-Factor (like myself), it's a fun remembrance of simpler, goofier time. While Artie & Leech will eventually end up in Generation X, this is actually the last appearance of Taki until the 2010s.

As with X-Men Annual #1, the third story in this annual features Cable giving X-Force a rundown on their ten greatest villains. As I suspected, they lay claim to Black Tom & Juggernaut, the Brotherhood of Evil Mutants, and Proteus (and they have to separate out the Morlocks - despite their pact with the Brotherhood - and include Kane and Bridge - who are certainly antagonistic towards Cable & X-Force at this point but not what I'd consider villains - to round out the ten).

And as with the other such lists, the first spot is reserved for a special "surprise"/not-a-traditional-villain, in this case, the (gasp!) X-Men! 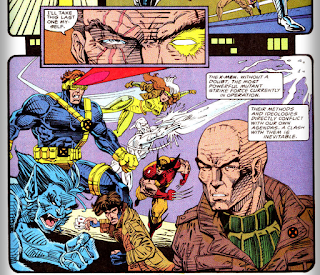 Art in the main story comes from Greg Capullo, late of Marvel's Quasar series, who will take over as the new regular artist on the main book with issue #15. The top villains story is once again written by Dan Slott.

Amongst the pin-ups is one from Adam Kubert, Andy's brother and future Wolverine artist, in what must be some of his earliest work for the X-office. 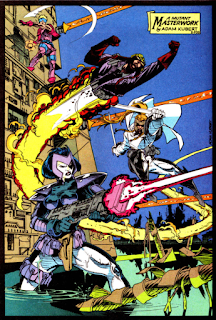 A Work in Progress
Cable is dead in this future, and none of the remaining X-Force members who worked with him recall him all that fondly.

Longshot's history is recapped, with the bottom panel meant to represent the events of the upcoming story in X-Men, I believe. 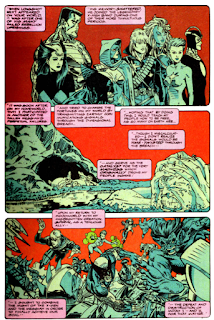 At the very end, a grizzled, elderly Longshot appears (his only physical appearance in the storyline), expressing his approval over the changes wrought by Shatterstar and the X-Men. 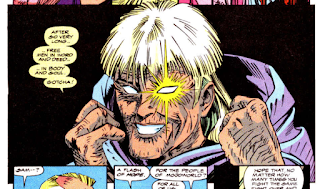 In the second story, Artie is able to telepathically mindlock the villain, something I don't think he's ever been able to do before. 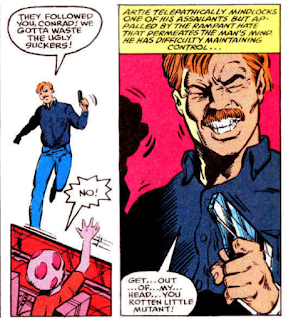 Boom-Boom is perhaps a bit too outraged by Cable's insuation of the X-Men as X-Force's greatest villains, considering she's never had much of a personal connection to Xavier and his dream. 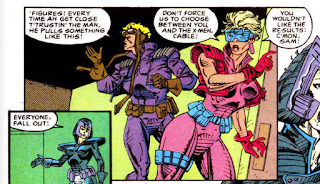 Austin's Analysis
Alternate future stories can be interesting, and they're certainly something of the X-books' bread-and-butter at this point. From the perspective of a New Mutants fan, there's no denying the fun in seeing a proto-Douglock, long teased in that series, or the return of a teenaged Illyana, or even a legacy Power Pack character (as well as older, more seasoned versions of characters like Cannonball). So in that regard, this issue isn't a complete waste (and while it's a little rough here, the Greg Capullo art makes for a decent preview of his upcoming run on the title). But it completely fails as a conclusion to "Shattershot", having skipped over the most interesting idea (Arize & Spiral leading a successful rebellion against Mojo) to do a pretty basic "in winning, the hero becomes as bad as the villain" storyline, with alternate future versions of characters instead of anyone we know or care about from the main book (it's X-Force's first annual, and none of the books characters in their current iterations appear in the main story, which seems like a questionable decision, at best).

The end result is a four part storyline with very little narrative connection between the parts. The first two chapters are just rehashes of the same material, two sets of X-Men protecting Arize from two sets of Mojo goons. The third part at least makes some contribution to the ongoing narrative via the Spiral/Rita confirmation, then moves Arize into place for an interesting conclusion, which this issue proceeds to completely skip over, presenting a scenario and group of characters even more removed from what little narrative spine the first three chapters had. Taken individually, on their own merits, these four annuals aren't terrible: the first one is probably the weakest but still perfectly adequate, the second has some interesting Jae Lee art, the third has some legitimately entertaining art and a strong connection to past continuity, and this one features some fun alternate future versions of characters, a treat especially for New Mutants fans. But as any kind of whole, "Shattershot" is just kind of a mess, and ultimately unsatsifying.