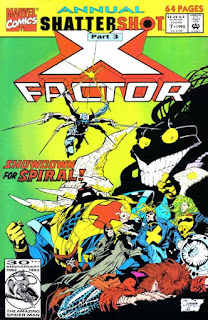 Plot
Enraged that the pirate network led by Mojo II is beating him in the ratings, Mojo resolves to convince Spiral to kill Arize for him. On Earth, Val Cooper briefs X-Factor on their latest mission: to bring in Spiral, who has been causing trouble, a mission that means more than most to Val since Spiral was once a member of Freedom Force. They track her to South Dakota, where Spiral has in turn located Arize, and interrupt her efforts to kill him. During the course of their fight, Spiral explains that she was once Ricochet Rita, and she wants to kill Arize because he's destined to transform Rita into Spiral. Arize admits as much, as well as the fact that the sorry state of Mojoworld is his fault. He asks Spiral to bring them both back to Mojoworld, so they can begin to make amends, and Spiral agrees.

2nd Story: Drowning in paperwork, Val is tricked by Madrox and Rahne into working late and giving them tickets to a concert she had wanted to attend. Working late alone, she hallucinates being attacked by the massive stacks of paper, until Madrox & Rahne return and guilty admit they tricked her, at which point she redirects her ire towards them.

3rd Story: Cal is bullied at school and, fed up, decides to hire Strong Guy to beat up Cal's bully. Strong Guy is reluctant at first, but feels bad for Cal, and proceeds to scare the bully into leaving Cal alone. However, a few weeks later, Strong Guy checks in on Cal and discovers he's using his relationship with Strong Guy to be a bully himself, and Strong Guy is forced to give him the same treatment as the bully.

Firsts and Other Notables
Hinted at previously, this issue confirms that Spiral is the future form of Ricochet Rita, the stuntwoman whom Longshot befriended in his limited series and which accompanied him back to Mojoworld (the idea being that down the road, Mojo had a captive Rita transformed into Spiral, then sent her back in time to battle Longshot and her younger self). 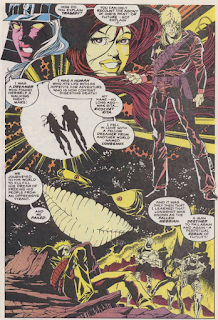 The story ends in an echo of the conclusion to that miniseries, with Arize and Spiral resolving to return to Mojoworld and makes things right, thus (sort of) setting up the conclusion to the story in X-Force Annual #1. Shatterstar's role in that process is also teased, another setup for the next chapter. It's also hinted pretty strongly that Shatterstar is the child of Longshot & Dazzler, something Nicieza has said wasn't his intent, but, I mean, it's pretty blatant in this issue (even before we get to the Shatterstar "gag" at the end of X-Men #11). 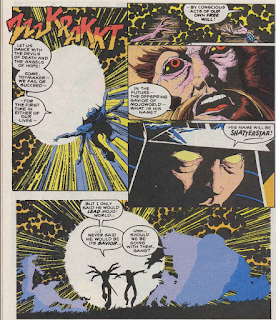 Arize mentions in this issue that the madness of the Spinal Ones on Mojoworld is caused by their absorbtion of television wavelengths coming from Earth, which get twisted in transit. He just sort of casually tosses it off, making me think this is a long-established element of Mojoverse lore I'm forgetting, but this might be the first time that idea is suggested. 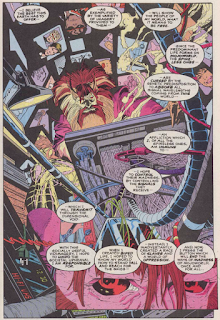 The third story in the annual is a riff on Calvin with Hobbes, with Guido stepping in to help a bullied Cal, before it takes a somewhat dark turn and Guido discovers Cal is using his newfound relationship with Guido to set himself up as a bully in his own right.

Future Marvel Knight and Editor-in-Chief Joe Quesada draws the main story in this issue. He will take over from Larry Stroman as the new regular penciler of the series following "X-Cutioner's Song", though his run is short, lasting only six issues. Future Uncanny X-Men artist Joe Madureira draws the third back-up story, some of his earliest work for the X-office, and though regular writer Peter David handles the two back-ups, Fabian Nicieza once again writes the "Shattershot" installment.

A Work in Progress
Havok reminds us of the limitations on Quicksilver's power, though it seemed like that was meant to be the result of the deceased Ricochet's power. 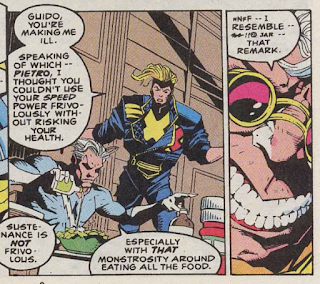 The stuck mayo jar from issue #71 makes a return appearance in the main story. 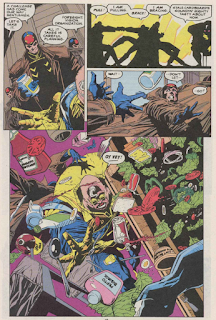 Polaris is able to magnetically levitate celery due to the iron in trace minerals, which becomes a favorite explanation around this time for how characters like her and Magneto are available to affect otherwise non-magnetic organic matter.

Guido chides Havok for not using his codename during battle. 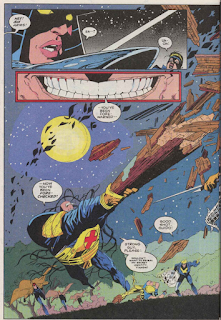 Havok is uncomfortable leaving Longshot's fate up in the air due to their time together in the X-Men, another nice continuity nod.

Rahne seems uncharacteristically mean-spirited in the second backup story, laughing as Jamie tricks Val into working unnecessarily and losing out on a concert she wanted to attend, though I suppose it could be chalked up to changes in her temperament brought on by the Mutate transformation.

Damage Control, the default organization in the Marvel Universe for cleaning up superhero messes, is referenced in the second story as well.

Artistic Achievements
Quesada turns in a pretty great team shot. I mean, it's beyond ridiculous, in that Guido is enormous relative to everyone else, and I'm not sure why Havok and Polaris are crouched down so low, but I still love it. 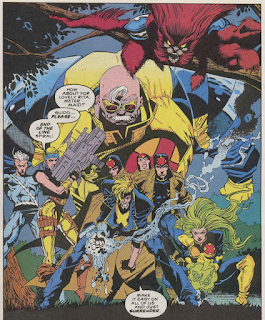 The Grim 'n' Gritty 90s
Guido mentions the then-recent economic downturn. Thankfully, the dot com boom will take care of that, and ensure we never have financial problems again. 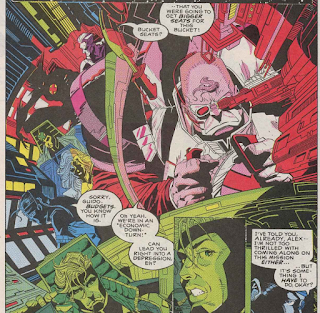 Val wields a pretty 90s-riffic gun in that team shot.

The president Val thinks she's talking to in the second story is Bush the Elder. 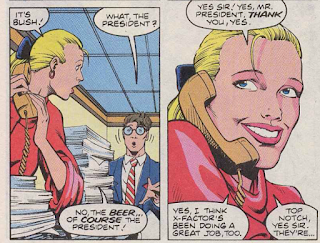 Val finishes off the paper monster in a scene that echoes Linda Hamilton's defeat of the Terminator in the first film.

Austin's Analysis
Taken on its own merits, this is probably the strongest of the four "Shattershot" parts. While the confirmation of the relationship between Ricochet Rita and Spiral is more "making explicit something long hinted at", rather than a true revelation, it's still good to have it confirmed, and lends a little narrative weight to this chapter (and really, the storyline as whole, which is sorely lacking in any kind of narrative weight). Plus, dropping that confirmation into the X-Factor annual makes sense, since Spiral was a member of the new X-Factor's predecessor in the government-sponsored mutant team game. Nicieza using this as the opening to get X-Factor involved in the plot is a shrewd use of continuity, especially since, otherwise, Arize's role in this and connection to X-Factor is pretty negligible.

And there's also the Quesada art. His role as Marvel's second-longest-tenured Editor-in-Chief, and the various decisions made by him or under his reign during that time has somewhat obscured his reputation as an artist these days. I have no idea what the critical consensus of his work is now, but I've always liked it. It seems to combine the energy of the Image guys with an animation-inspired, Mignola-esque quality. It by no means approaches anything like realism (and his storytelling, which gets better, is a little rough here), but it's exaggerated in all the right ways, for maximum effect (and in that regard, looks good on the new X-Factor, which gets a similar look in the regular series from Larry Stroman). Thus, the art here and the use of Spiral combine to raise this issue above the rest of the chapters in this storyline, even though it ultimately has the least to do with "Shattershot" overall.