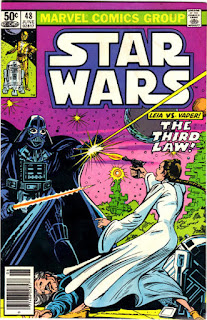 In a Nutshell
Princess Leia and Darth Vader attempt to outwit one another on a banking world.

Plot
Princess Leia arrives on the financial world of Aargau alongside Viscount Tardi, hoping to secure financing for some new X-wings. After being briefed on Aargau's rigorous and specific rules laws, they encounter Darth Vader, claiming to be on the planet as part of diplomatic mission, but Leia easily recognizes the three members of his retinue as assassins. Throughout the course of their stay on Aargau, as they work through the complicated process of getting the loan, Leia proceeds to defeat each of Vader's assassins in turn, all the while operating withing Aargau's strict laws. Finally, Leia goads Vader into breaking the rules and killing Viscount Tardi, who turns out to be a droid imposter. The real Tardi died weeks earlier, and needing him to secure the financing, a carefully programmed droid took his place. But, Leia explains to Vader, she needed Vader to slay "Tardi", as the process of leaving Aargau would have revealed the ruse, thus defrauding the loan. But Vader in turns reveals a ruse of his own: he has no interest in stopping Leia's loan. Instead, he's acquired the Alderaanian jewels she put up as collateral and was thus equally willing to dispatch Tardi so as not to draw attention to the missing jewels if Leia's ruse was discovered. Vader then leaves, advising Leia to keep all this to herself, for fear of how it may affect her credit rating.

Firsts and Other Notables
This is Carmine Infantino's last regular issue of the series, a run going back (barring a few fill-ins and the Empire adaptation) to issue #11. Without a doubt, at this point in its run, he's the definitive Star Wars comic book artist. He'll return for issues #53-54 with Walt Simonson, and also provide the art for the series second annual.

It also introduces the banking world of Aargau, a planet with a fairly complicated series of laws governing its people and visitors. While the world itself won't appear again, it does get mentioned in later issues of this series as well as a variety of Expanded Universe sources in later years (including an entry in The Essential Atlas), and the general idea of planets/systems which specialize in banking and are thus equally coveted and specially protected during the various conflicts in the Star Wars Universe is something both the official canon and the EU will return to again.

A Work in Progress
Leia is attempting to secure a loan for a new batch of X-wing fighters.

She is also back in her New Hope era white gown, though for Leia, that's a less egregious "standard" look than Luke constantly being in his farmboy attire.

All of the assassins hired by Vader in this issue are members of the Assassins Guild; later Expanded Universe stories will get a lot of mileage out of a similar Bounty Hunters Guild to which most of the bounty hunters introduced in Empire are members of/having dealings with. 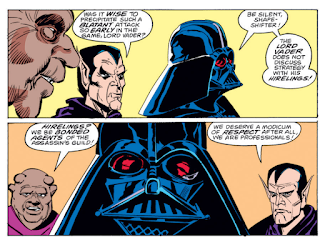 Vader is quick to remind Leia that he oversaw the destruction of her home planet.

Unlike the earlier story involving the gambling hub known as The Wheel, this issue doesn't do a very effective job of establishing why Vader is bothering to play by Aargau's rules and not just steamroll in and take what he wants.

It's the Mail
Several letters are printed in this issue calling the series to task for Luke having his lightsaber in issue #45, and the response to them says the office was deluged with similar letters. The official explanation given here is that Luke used the Force to retrieve the lightsaber while falling down the shaft on Cloud City. It's a fairly dubious answer, but I appreciate they came up with something. It'd be nice if they worked that into an actual issue, though.

Austin's Analysis
One glaring concern aside, I rather liked this issue. It effectively sets up a new world with some very specific rules governing how it operates, then drops Leia and Darth Vader onto that world, pitting them against each other, with the various complications arising due to the planet's rules generating various obstacles. In the end, the whole thing reads like a combination 40s era screwball comedy and a Looney Tunes cartoon, with the whole "I tricked you/No, *I* tricked YOU!" tradeoff between Leia and Vader at the end contributing to that reading.

But man, is Vader horribly characterized in this. He actually shakes his fists at Leia, in a "I'll get you crazy kids!" gesture, at one point, and his ultimate goal turns out to be nothing more than an elaborate jewelry heist (which seems a little below the pay grade of the Emperor's right hand man). This might have worked had it been published pre-Empire, when Vader was still, as far as anyone knew, a fairly one-dimensional heavy. But post-Empire, he's become the thematic catalyst for the narrative - he's no longer just the Emperor/Tarkin's goon, he's the central villain and the character around whom the entire story is centered, with a very specific and deeply emotional connection to the story's main character. Going from the big reveal at the end of Empire to this as his next appearance is simply jarring. I like this issue, for doing something a little different tonally but still fitting within the confines of the universe, but man, is it hard to get best Vader's characterization, in his first appearance since completely re-contextualizing the ongoing story.

Next Issue
The last Jedi.