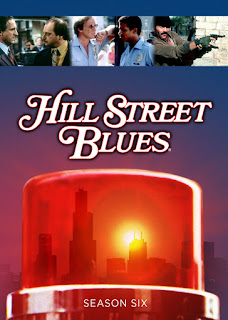 After working on the show as a writer for three seasons, Milch was named co-executive producer of Hill Street Blues for the sixth season, following the dismissal of Steven Bochco.  (Jeffery Lewis is also credited as an executive producer this year, but Milch is consistently referred to as the showrunner by fans of the series until the end of its run.)

Bochco was allegedly fired for cost overruns, although the thought of David Milch being brought in to bring fiscal responsibility to an operation is at least slightly amusing.


Milch’s first act?  Cut the fat and the bring cast down to a manageable level.  I have no idea what kind of publicity preceded this season, but I wonder if the season premiere is Milch’s response to rumors about the cast’s dismissal.  The episode opens with an entirely new cast of cops at Roll Call…sorry TV Fans of 1985, but there’s no Sgt. Jablonski or Det. LaRue or Officer Bobby Hill in sight.  This is a new cast of characters, and you’ll just have to deal with the change…deal with it, until you realize that the episode is opening with the night tour crew of cops.  Within a few minutes, the show cuts to the regular cast of the show, now in their off-hours.  It’s the kind of blatant screwing with the audience that Scott Gimple loves so much on The Walking Dead, only performed in the days when the viewers had no real access to spoilers or behind-the-scenes info. 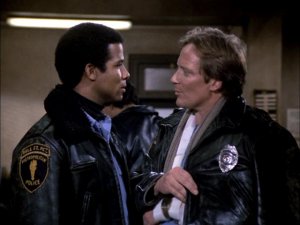 What follows is one of the more famous episodes of the series, as the audience learns what exactly the cops do when they’re not on duty.  Some of them still end up in life-or-death situations tailor-made for a television drama, while others might spend a night at home with their dog, reminiscing about their late wife.  What the stories have in common is a lead character facing some unexpected disappointment; in some cases it’s minor (Officer Bates learns that the pottery instructor she has a crush on is married), while others are tear-jerkers (Sgt. Belker is called off an undercover assignment when his elderly mother’s body is discovered). 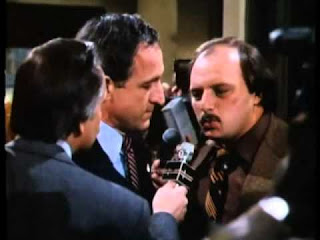 It’s apparent by the second episode just how the cast is going to change, and as someone who’s never been able to keep track of the series regulars, I say it’s a relief.  Even after the purge, Hill Street Blues has too many characters -- but before the purge, it was often a struggle to even recognize some of the actors’ faces.  The series regulars given the axe include Det. Patsy Mayo, Det. Harry Garibaldi, Lt. Ray Calletano, Fay Furillo, and Officer Leo Schnitz, and that’s only by Episode Two.  Later in the year, series regular Officer Joe Coffey is killed off.  Some of these characters have dignified send-offs.  Others are just gone without explanation.  One of the regulars given the boot is the unwatchable Fay Furillo, the ex-wife of the main character…and at the time, wife of Steven Bochco.  How Bochco felt about Milch replacing him on the show he co-created, and later dismissing his wife, I don’t know…but they continued to work together for years, and Milch has always been complementary of Bochco in interviews.  (Whether or not Milch outright fired actress Barbara Bosson, or merely chased her away by declaring that her character would once again become a regular irritant for Capt. Furillo, is debated by fans.)

The only new character introduced this year?  Lt. Norman Buntz, portrayed by a noticeably younger Dennis Franz.  Franz previously appeared on the show in Season Three in a different role, a Milch creation intended as a more “realistic” portrayal of cops…one painted as so corrupt, Milch was ordered to kill him off.

Franz returns in virtually the same role; the only real difference between Det. Sal Benedetto and Lt. Buntz is that Buntz is only slightly “rogue.”  He’s just off-the-books enough to be tolerable for a primetime audience.  Whereas Benedetto was actively involved in stealing from evidence lockers and setting up fellow cops to be shot, Lt. Buntz merely bends the rules in defensible ways -- like when he hauls in a drug dealer his friend asked him to pull off the streets.  Buntz doesn’t have any legal grounds to search the dealer, so he invents a story involving a “drug-sniffing turkey” that he thinks will justify the bust.  The pious Captain Furillo makes it clear that he doesn’t approve of this Lt. Buntz and his questionable methods, but by the end of the season, they find a tenuous peace with each other. 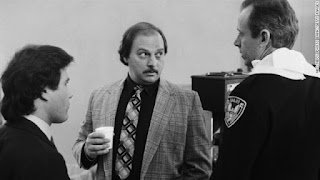 Milch is clearly in love with the Lt. Buntz character, who’s dropped into the show in the second episode of the season and immediately takes the lead role in several episodes.  There’s no attempt to ingratiate him with the rest of the cast; his virtuous superiors like Lt. Goldblume and Captain Furillo just have to accept him like he is.  That don’t approve of his methods, they tell us that almost every week, but Buntz always manages to escape trouble.  The Lt. Buntz storylines are the ones clearly setting the stage for NYPD Blue; sometimes his plots don’t seem to belong on the show at all.  “Das Blues” introduces another new character, Det. Donahue, a gambling addict who’s asked his former partner Lt. Buntz to accompany him on a bust.  Buntz later realizes that Donahue only wanted Buntz to watch his back while Donahue intimidated his bookie into cancelling his debts.  When a disgusted Buntz tries to lecture Donahue, his former partner chastises him for his sanctimonious attitude.  It’s at this point that the audience discovers that Lt. Buntz was once even sketchier than we thought, although he is now trying to straighten up his act.  Virtually every beat of that story could’ve made its way into an early episode of NYPD Blue.

I’ll be honest -- if someone cut together only Dennis Franz’s scenes from Hill Street and posted it on YouTube, I’d rather watch that than the actual episodes.  Many of the series’ plots remain goofy, and while Lt. Buntz is an entertaining vehicle for Milch to examine thorny ethical dilemmas, the work is often undermined by the absurd subplots.  Hill Street Blues might’ve been the standard for serious drama in the ‘80s, but around half of each episode is dedicated to implausible antics.  How goofy does it get?  “Comedic” right-wing parody character Lt. Hunter hits his head in the station’s basement, and spends the rest of the episode convinced that he’s being held captive on a Russian submarine…and that he has to fight back.  This subplot appears in the same episode that has Lt. Buntz shamefully examining his past corruption while his former partner begins his descent into self-destruction.  These stories really don’t belong together.