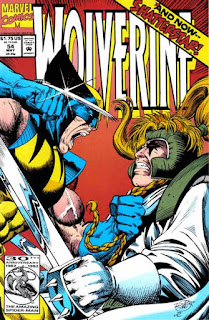 In a Nutshell
Wolverine meets Shatterstar.

Plot
A group of teenagers calling themselves the Vid Kids chase down a Morlock, beating him to death while filming the whole thing, after which they send the tape to a news station. Seeing the story on the news, Shatterstar decides to investigate. Meanwhile, Rogue & Wolverine are training in the Danger Room, after which they too see the news report, and Wolverine leaves to track down the Vidkids as well. Soon, he and Shatterstar cross paths and attack each other, until Shatterstar recognizes Wolverine and kneels to him in deference. Together, they track down the Vidkids, who are in the midst of stalking another homeless mutant, and defeat them, but Shatterstar is shocked to learn they fight for no other reason than the fun of it. However, Wolverine doesn't let Shatterstar kill them; instead, he smashes their video camera, saying the best way to punish kids is to take away their toys. Later, they watch as the police arrest the Vidkids, with Wolverine noting they're still getting the attention they wanted, and Shatterstar left unsure about his place in the world.

Firsts and Other Notables
Shatterstar guest stars in this issue, and meets Wolverine for the first time, which probably felt like a bigger deal in 1992 than it does now (Cannonball and Rogue also makes brief appearances in the issue as well).

The villains of this story are the Vidkids, a group of teenagers who attack mutants and capture the whole thing on videotape. They're generally just terrible people, as opposed to anti-mutant bigots (ie they target mutants just because it guarantees more attention for their videos). They are pretty terrible and horribly dated, and as far as I know, exist nowhere outside of this issue.

Wolverine is wearing his brown-and-orange costume in this issue, which places it a fairs way back chronologically, but also suggests it may have been sitting in a drawer for a few months after being completed.

The Chronology Corner
The Marvel Chronology Project places this issue between X-Men #3 and #4, after Hearts of Darkness and before Wolverine #48, though it should probably go back even further, to the gap before the relaunch, since Magneto's death isn't really referenced despite a pretty clear opportunity to do so.

A Work in Progress
When Rogue comes up short during a Danger Room scenario after Magneto appears, Wolverine asks if she's still sorting out her feelings for him (note that speaks of Magneto in the present tense).

Shatterstar refers to Wolverine as "Lord Wolverine", and holds him in some reverence. 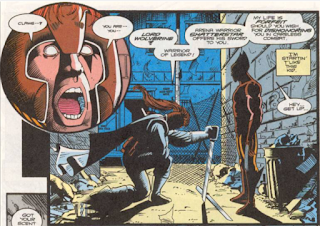 Wolverine (or Nicieza) is apparently not much of a TV guy. 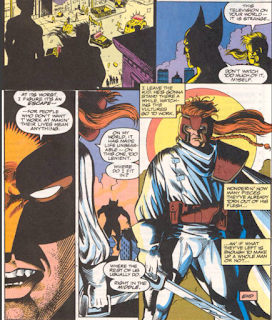 The Reference Section
Cannonball is wearing a Button Your Fly t-shirt, a reference to Rob Liefeld's Spike Lee-directed jeans commercial. 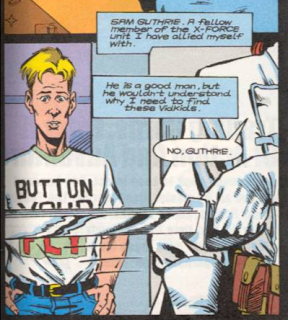 The Grim 'n' Gritty 90s
Shatterstar references American Gladiators, considering it one of the closest approximations to the way his homeworld views TV currently on the air.

And, of course, the dominant physical media format of the early 90s, the videotape, is all over this issue.

The Best There is at What He Does
Wolverine gives Shatterstar the old "don't make me pop the middle claw" routine. 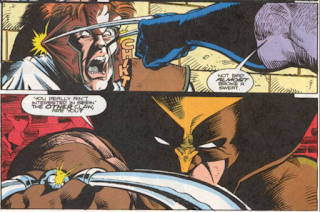 Austin's Analysis
This is obviously a fill-in issue, what with the different writer, artist and anachronistic costume for the main character, but instead of giving us the usual one-and-done "Wolverine fights some random foes and in doing says something about his character" fill-in, this one focuses on Shatterstar, essentially comparing and contrasting Wolverine to one of the countless imitators his popularity spawned. Ordinarily, I'd write something like this off as pointless filler, but in this case, it helps that the fill-in writer is Fabian Nicieza, the closest thing X-Force has to a writer at this point. And since Rob Liefeld hasn't really given Nicieza much space to do any character work yet in that title, this random Wolverine fill-in thus represents really the first concerted effort to do anything with Shatterstar as a character aside from having him round out fight scenes and drop random bits of made-up slang.

The character work isn't exactly groundbreaking or relevatory (it's pretty much the standard "stranger in a strange land" material, not unlike what Bishop is doing over in the two X-Men books, with the media-satire of Mojoworld lightly sprinkled on top), but the effort on Nicieza's part is still appreciated. And Darick Robertson is at least a decent artist holding down a regular book (as opposed to the random rookies or journeymen artists who tend to populate these fill-ins), so the art isn't half bad either. By no means essential reading and entirely skippable, this is nevertheless better than the usual Wolverine fill-in fare, especially in the context of the larger X-narrative.