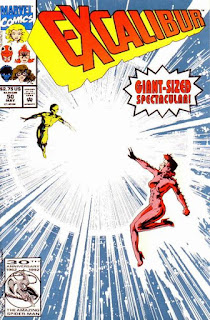 In a Nutshell
Phoenix battles Necrom

Plot
Necrom taunts Rachel, but Kylun is able to drive him off. However, Feron decides to face Necrom anyways, and runs off, with Kylun following to protect him. As the two attack Necrom, they're joined by Micromax. Necrom survives their attack, but is weakened. Meanwhile, inside the lighthouse, Excalibur realizes they can combine their various bodies to form a single being, capable of navigating and repairing the collapsing realities. They reach Otherworld, home of Merlyn & Roma, but Necrom is waiting, and Rachel decides to unleash the Phoenix Force to fight him, even at the cost of her memories. The two battle in a brawl that spills out into space. Ultimately, reasoning it's more power than he can handle, Rachel sends all the power of Phoenix into Necrom, causing him to explode. A comatose Rachel then emerges on Otherworld, thanks to Roma, and Merlyn explains to Excalibur how he had carefully manipulated these events. But Meggan, after Roma telepathically suggests the idea, uses the remaining cumulative power of the Captain Britains to blast Merlyn's tower, thus destroying all other towers across the multiverse, including Excalibur's lighthouse, and with it the source of Merlyn's power. Returning to Braddock Manor on their Earth, Excalibur is greeted by their friends & allies, who fled the lighthouse at Roma's prompting. Though Nightcrawler remains suspicious, Captain Britain trusts Roma, and declares theat they're nobody's pawns now.

Firsts and Other Notables
As a result of her battle with Necrom, Phoenix is rendered comatose (and is wearing her original green-and-yellow Phoenix costume instead of her red spiky Hound suit). While she will appear in the next two issues, this effectively writes her out of the series for a little while (she remains comatose in #51 & #52); after #52, her next appearance won't be until issue #61. 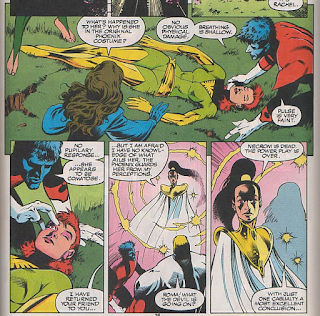 Necrom is defeated this issue, but before he goes, we learn more about him, chiefly that he was the Sorcerer Supreme of Merlyn's world, and close pals with both Merlyn and the original Feron, before he went power mad. 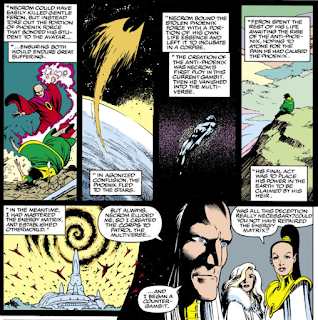 Along the way, we also learn more backstory on the Phoenix Force, but I believe most of it has, in subsequent stories, been mostly ignored by everyone outside of Alan Davis. He'll do a more thorough dive into Phoenix Force lore in issue #52. It's also revealed that Merlyn formed the Captain Britain Corp to help search for/guard against Necrom. Not sure if that's been similarly ignored by later writers.

Merlyn admits that he was the Merlyn in the events of Possession, but that the entirety of that story only took place inside Alistair's head, and this never happened. He also reveals that he was the older, chess playing Captain Britain seen earlier in Otherworld. 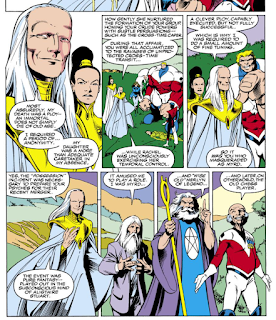 It's also said that the "Cross-Time Caper" was a means to prepare Excalibur for the events of this issue, by getting them used to interacting with other realities.

Excalibur merges into a single being in this issue (at least the original five), and it's theorized that Roma assembled them for the team specifically because the five of them, in the right circumstances, had the right powers/experiences to make the merging possible, and thus save the multiverse in this issue. 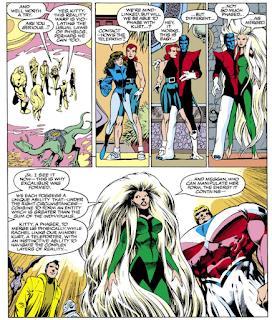 Excalibur's lighthouse is destroyed this issue, as Meggan uses the combined power of the merged Excalibur to destroy the various lighthouses across the realities, thus ending the singularity and releasing the energy coveted by both Merlyn & Necrom. It marks the end of that location as the team's headquarters - they are delivered to Braddock Manor at the end of the story, and that will be their new base of operations moving forward. 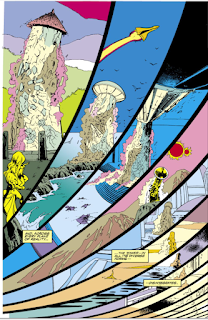 The first page of this issue features a pinup from Alan Davis, and is printed on thicker paper. A credit thanks Sven Larsen for the idea (presumably the idea for the pin-up). This is also a double-sized anniversary issue, though it thankfully avoids getting slapped with a gimmick cover. 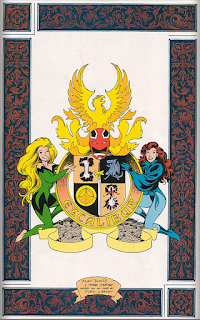 A Work in Progress
Rachel's ability to send first Kate Pryde's mind and then Rachel herself back in time is recalled, as are the events immediately preceding her her trip to the past, and the general consensus at this time is basically that Rachel must have some kind of temporal power independent of the Phoenix (but I believe Davis isn't done exploring this idea yet). 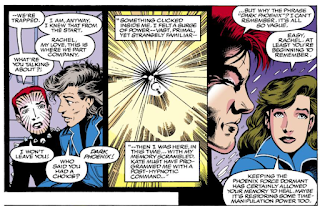 This issue confirms that Captain Britain is hulking up due to his absorption of the various alternate energies being released by Necrom's singularity. 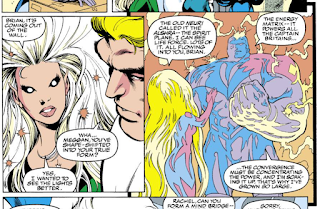 It's also mentioned that Earth-616, the Earth of the principal Marvel Universe, is the "prime" Earth in the multiverse, though I believe earlier Captain Britain stories established that idea.

Excalibur's lighthouse is said to have been built by an ancient race which predates Merlyn, which I don't believe has been established before.

In a nice and appreciated detail, it's said that prior to Meggan's destruction of the towers, Roma issued a warning to anyone in or near the tower to get clear.

The issue ends, with Merlyn's plans scuttled and the towers destroyed, with Excalibur declaring that, finally, they are nobody's pawns anymore. 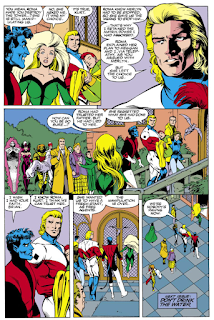 The Reference Section
There's probably a ton more of these visual winks in the various alternate realities sprinkled throughout the issue, but the gathering of Superman and his Super Pets in this panel stuck out to me.

Austin's Analysis
Not only does this wrap-up the Necrom storyline that's slowly been building since issue #42 (but really kicked into high gear over the last few), but Davis does a pretty remarkable job of using it as a wrap-up for the entirety of the series thus far. In the process, he manages to imbue some pretty meandering and otherwise meaningless stories (*cough* "The Cross-Time Caper *cough*) with a certain level of relevancy. Intellectually, we know this wasn't the plan all along, that Claremont didn't have Excalibur wandering aimlessly through one alternate reality after another just to setup this story, but it nevertheless works, and retroactively makes some of this series' lesser moments at least somewhat more meaningful.

In addition, the actual climax to the Necrom story works pretty well on its own. Davis manages to sell the scale of the final Necrom/Phoenix fight, as the pair hurl cosmic bodies at one another, and the merged Excalibur is the right kind of whacky this series does well, while also giving the rest of the cast something to do besides stand and watch Phoenix fight. And in the end, there's not only a sense that everything thus far has been building to this issue, but also that the deck has been cleared for something new, represented most dramatically by the destruction of Excalibur's lighthouse. Phoenix (the team's most powerful and arguably problematic member) is off the board, for the time being, there's a bunch of new characters with lots of potential (Kylun, Cerise, Micromax & Feron) hanging around, the team has a new base of operations, and the characters, at least, believe they're free of any past manipulations, ready to go their own way. As both an ending and a beginning then, this issue succeeds remarkably well.