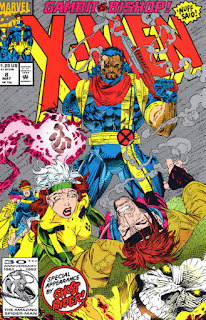 In a Nutshell
Bishop meets the Blue Team, and the X-Men meet Gambit's wife.

Plot
As Wolverine searches fruitlessly for more information about his past, Professor X & Storm introduce Bishop to the Blue team. Upon meeting Gambit, he recognizes him as the Witness from his timeline, and tells the X-Men how they are betrayed and murdered by one of their own in the future. Nonplussed for the time being, Xavier insists on continuing with the X-Men's planned picnic, saying they need some downtime. At the lake, Gambit & Rogue attempt to have a picnic together, but they are interrupted by Bishop, who angrily attacks Gambit. The two fight until Rogue's fury over the destruction of the pie she baked causes them to laughingly stop, at which point all three are blasted from behind by a woman named Bella Donna, whom Gambit says is his wife. Back at the X-Mansion, Gambit & Bella Donna explain how their marriage was meant to maintain a peace between their rival Guilds, until Gambit was forced into exile. Now, that peace has been shattered, and Gambit feels it his duty to return to New Orleans to try to rebuild it. His fellow X-Men agree to join him and depart for the city, at the same time that Ghost Rider arrives there as well.

Firsts and Other Notables
While I had as a kid previously picked up an occasional comic book here and there without ever really thinking anything of it, this is the first issue of X-Men I ever bought and read, as I finished the transition from baseball cards to Marvel trading cards to comics, and it kicked off a regular habit that continues to this day, having bought every issue of X-Men published to this date (though with the current habit of constantly relaunching books with new volumes and adjectives slapped before the name "X-Men", it's harder to define which series, if any, is the "main" X-Men title anymore), with the habit quickly expanding from there into more and more series, across multiple companies, and, really, changing my life in some small, but fundamental, ways.

Bishop is introduced to the Blue team, and he immediately drops cryptic hints about their future (calling Forge "Genesis" and Jubilee the last X-Man) and picking fights with Gambit, whom he quickly recognizes as the Witness. 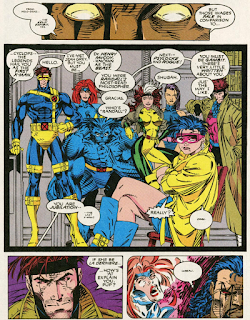 Bishop also refers to Cyclops as the X-Men's greatest leader, which gets an icy response from Storm but does a lot to endear me to him. 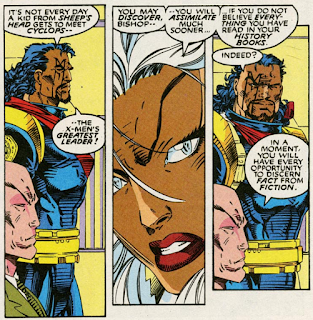 The X-traitor storyline becomes a thing within the context of the series' universe this issue, as Bishop tells the X-Men about their future betrayal and deaths, and that Gambit is the only one to have witnessed it. 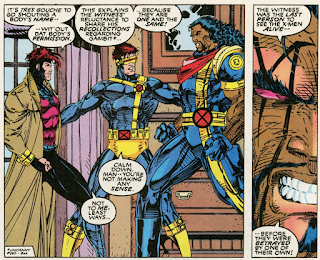 Teased a bit in Uncanny #288, this is the issue where the "Psylocke flirts with Cyclops, it seems like maybe its nefarious for awhile, then it isn't, and it quietly goes away" subplot really begins, with Psylocke attracting Cyclops attention while emerging from the lake, much to Jean's dismay, which in turns seems to amuse Psylocke, in a scene that quite possibly may have jumpstarted puberty for me (as much, if not more, for Jean than Psylocke). 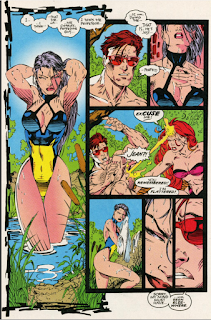 This issue introduces Bella Donna, Gambit's wife, and with her, a big chunk of backstory about Gambit (the first real concerted effort to provide any concrete info on the character prior to his first appearance), who is from a group of thieves called the Thieves Guild, and who married Bella Donna to maintain a truce with the rival Assassins Guild (he then killed his brother-in-law in self-defense and fled New Orleans, in a tale not unlike what Nightcrawler did to his foster brother). All of this business with Guilds will, for better and worse (mostly worse), stick around, and come to prominence pretty much anytime Gambit gets the spotlight, across multiple titles, two Gambit-led limited series and his later solo series. So get used to it... 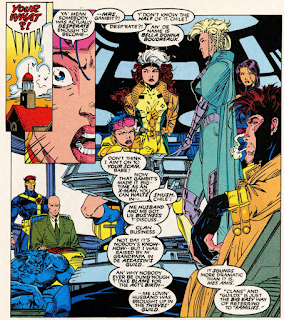 For now, it's merely setup for the series' crossover with Ghost Rider, the third and final "one X-book/one main Marvel Universe" crossover of the year (following in the footsteps of X-Force/Spider-Man and X-Factor/Incredible Hulk). Both the X-Men and Ghost Rider were sales juggernauts, so it's not surprise to see the two books crossing over at the height of the speculator bubble.

The Chronology Corner
This issue takes place before Uncanny X-Men #288, and thus the entire Ghost Rider crossover does as well.

A Work in Progress
This issue opens with Wolverine attempting to discover more about his past following the events of recent issues. Later, he complains to Professor X about those events, along with all the memory shenanigans happening in his own series, has led him to feel like he's reverting to person he was when he first joined the X-Men, which is really the only time that Larry Hama's attempt to have Wolverine become wilder and more animalistic ever gets acknowledged in this series. 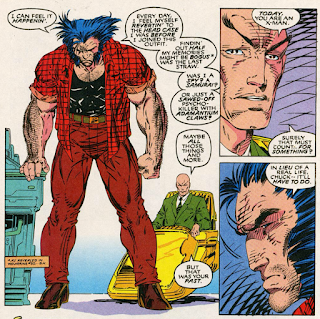 Forge's mutant power is explained as being able to build and repair anything mechanical, which is a bit more specific than in the past.

In a nice bit of continuity/self-reference, Jean tries to discuss Professor X's reaction to have his legs crushed by the Shadow King back in Uncanny #280. 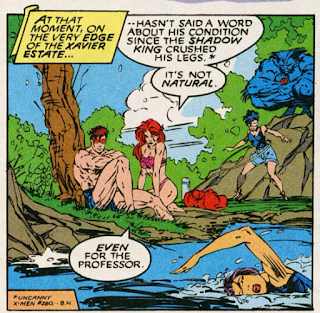 While Uncanny #287 revealed that Bishop had the Witness had a past together, this issue reveals that the Witness raised Bishop (at least in part). 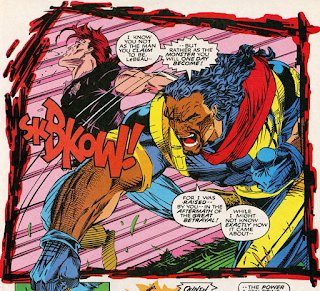 Young Love
The Gambit/Rogue flirtation kicks up a notch here, with the two attempting to have a picnic together to make up for their aborted date (from issue #4), and Gambit both continuing to insist that he doesn't care about the ramifications of Rogue's power should she touch, and also making a surprisingly-brazen innuendo in response to her declaration that she made him a pie with her own two hands. 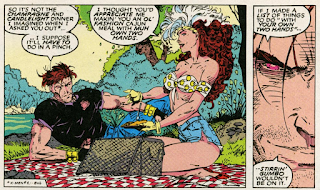 Though Storm fails to recognize it, things are prickly between her and Forge, setup for their plotline in Uncanny #289-290.

Austin's Analysis
When I first started this project, there were a handful of issues that I looked to as significant benchmarks, points that, upon reaching would feel like an accomplishment and make me marvel at having reached them. Giant-Size X-Men #1. "The Dark Phoenix Saga" & "Days of Future Past". The linewide relaunch and release of X-Men (vol. 2) #1. And this issue, for entirely personal reasons, because it's the issue that started it all. Everything that came after, every issue bought and read, every convention attended, every review in this series, all started right here, with this otherwise random issue of X-Men I picked up off the new comics shelf at Shinders.

Yet so much of what I love about the X-Men, and superhero comics in general, has seeds in this issue. The convoluted backstories (who is this Bishop guy? Why does he hate Gambit so much? What happened to Xavier's legs?), which suggested an entire world of past events for me to explore, stories beyond just these 22 pages. Wonky time travel stuff (Bishop knows Gambit from the future), one of my favorite narrative elements even back then. The willingness to devote pages to the characters just hanging out together, which helped them come across as real characters, not just ciphers moving through a story as the plot demanded it. References to both past stories (the recently-completed Omega Red arc) and future ones (the upcoming Ghost Rider/Brood crossover), reinforcing the serial nature of the stories, the notion that not only are their stories to read in the past, there's always another one just a month away. And of course, there's probably no demographic more perfectly situated to be captivated by Jim Lee's art than teenage boys (I was eleven when I bought this).

It's no surprise that I have such affection for Classic Claremont Quiet issues because, like issue #4, that's essentially what this is, an issue which introduces Bishop to the Blue team (and anyone reading only this title), showcases some character interactions and relationships (Storm & Forge, Cyclops/Jean/Psylocke, Rogue & Gambit) and one of the series' ongoing subplots (the X-traitor), then sets up the next plot while also serving up a pretty big slice of backstory for the long-mysterious Gambit. I do my best to not hold against this issue that said backstory is a lot of nonsense, and will come to drag down the character with some pretty terrible stories, and it could very easily be argued that Bishop has reached a point of overexposure already, having received two consecutive spotlight issues in Uncanny before being featured heavily in this issue, but his interactions with (and commentary on) the X-Men here is entertaining enough to forgive that (after all, what's the point of having a time travel character if he can't provide analysis and make cryptic comments about other characters' futures?).

Objectively, this is a perfectly fine but ultimately throwaway issue that does some fun stuff with Bishop and sets up a fluffy crossover with Ghost Rider, along with some quiet character moments (and, admittedly, more than a little T&A along the way), but in the grand scheme of the X-Men narrative, it's largely forgettable and mostly unimportant. Nevertheless, for me at least, reaching this point is a milestone, something I've been looking forward to for a long time.

Now on to the next!