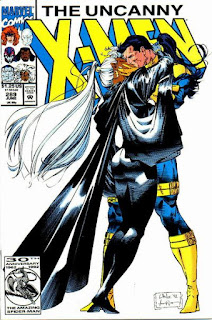 In a Nutshell
Forge proposes to Storm.

Plot
Storm continues Bishop's orientation while Bobby nervously prepares for a date with Opal, during which she'll be meeting his parents for the first time. Meanwhile, Hiro is keeping watch on Iceman's parents from afar. Back at the mansion, Mystique, staying at the school at Wolverine's request, taunts Warren about his life pre-Archangel, drawing the attention of both Storm and Forge. This leads to Forge and Storm arguing, with Forge taking Storm to task for putting her responsibilities with the X-Men over their relationship. He tells her that he knows she is more than her cool, detached "Goddess" persona, but Storm isn't so sure. Forge declares he'll prove it to her, and asks her to marry him. Meanwhile, Bobby & Opal meet Bobby's parents for dinner, but Bobby's dad is blatantly racist about Bobby dating an Asian woman. Just then, Hiro interrupts, saying they're about to die, but that he is there to rescue Bobby and his family. As Bobby asks from who, Hiro's fellow cyber-ninjas suddenly appear, declaring that in order for vengeance to be exacted, Bobby's parents must die!

Firsts and Other Notables
After taking her to task for essentially ignoring him since she returned to adulthood during "X-Tinction Agenda", Forge proposes to Storm this issue. For the most part, this Forge/Storm relationship stuff is coming out of nowhere, since their feelings for each other haven't really been referenced since Forge was motivated to find the missing X-Men way back in the "Non-Team" Era, but that's also sort of Forge's point. I'm not sure Lobdell meant for this all to come across as metatexually as it does, but it definitely can be read that way. And I appreciate their relationship finally being addresses again in some way. 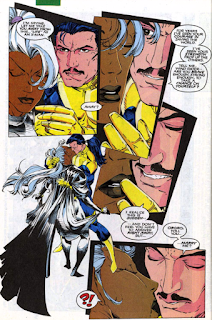 Opal is back, which means, unfortunately, Hiro and those stupid 90s cyber-ninjas from X-Factor #63-64 can't be far behind. Hiro shows up this issue watching Opal from afar, before the cyber-ninjas attack during the meeting with Bobby's parents at the end of the issue. 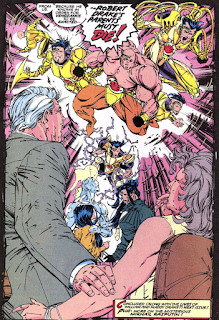 Iceman's parents both appear in this issue, and while both have appeared before, this is the start of the "Bobby's dad is racist!" characterization (here, he's down on the idea of Bobby dating an Asian women; later, his bigotry will extend to mutants as well), which becomes a minor running plot, for Iceman at least, throughout the 90s. Also, Iceman refers to his father as a seventy year old man, which seems to suggest that Iceman, youngest of the original X-Men, is older than he's probably meant to be at this point. 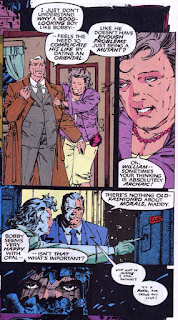 Mystique is on hand for this issue, and we find out she's staying at the mansion as a favor to Wolverine, following the events of Wolverine #51-53. 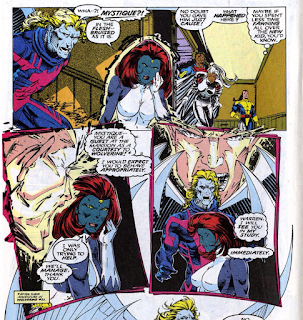 Bishop's head is added to the corner cover box with this issue.

Scott Lobdell is credited as the writer, and Whilce Portacio only as the penciler, thus marking the start of Lobdell's long tenure on Uncanny X-Men as a full writer (and not just scripting over Portacio and/or Jim Lee's plots)

This is the first issue of Uncanny X-Men I ever bought and read. I probably bought it at the same time I bought X-Men #8, but I remember reading X-Men #8 first, so I consider that one my first X-Men issue over this.

Collection Recollection
While I have been routinely terrible during the course of these reviews to note price changes throughout the years, I want to take a moment to point out that standard comics are, at this time, priced at $1.25 each. Because this was the price point when I first started buying comics  regularly, it is the baseline against which I have compared all future price. Also, with my $5 a week allowance at the time, $1.25 meant I could buy four issues a week (I'm pretty sure mom and dad were always willing to cover the tax). As a result, I also tended, through the years, to think of comic book prices in terms of "how many issues can I buy for five bucks?" (back then, four. Today, one. Maybe). This is also probably why I didn't start regularly reading Excalibur & Wolverine right off the bat - at $1.75 a piece, they ruined my whole "four for five" philosophy.

A Work in Progress
Amongst the various pictures of the X-Men through the ages is a large portrait of Magneto amongst some of the New Mutants pics, a nice nod to the history of the franchise and Magneto's role in it.

Following through on her concerns from X-Men #8, Jean attempts to have a heart-to-heart with Xavier, but he's not opening up much.

More angst from Archangel this issue, as he cries when Iceman reminds him of his previous life as playboy Warren Worthington, then gets mad when Mystique confronts him in his previous form saying he should be over his transformation by now, to which he replies that Apocalypse took everything from him in a single night (which isn't quite true; Cameron Hodge took everything from him, over a series of many days and nights, the the Marauders took his wings, and Apocalypse only got involved after Warren tried to kill himself). 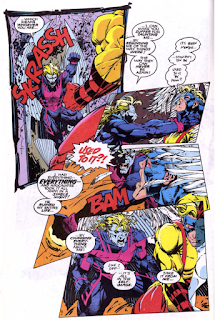 Also, I'm not sure if this panel of Archangel ignoring Xavier and mentally flying off is a deliberate homage to the time he quit the X-Men over Wolverine's behavior, or just a coincidence built on the fact that having him fly off from the mansion is a preferred artistic choice. 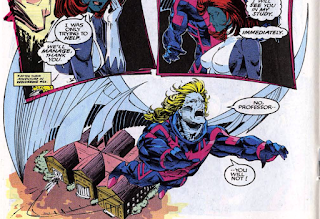 Forge snarks at Storm that she might have noticed what was wrong with Archangel if she hadn't been spending so much time fawning over Bishop, and, I mean, he's not wrong. She's spent three solid issues at this point on his orientation.

Artistic Achievements
If Portactio wasn't already officially out the door when he worked on this issue (next issue will be his last), he must be pretty close to it, since there's a distinct lack of backgrounds all throughout the issues, with panels just floating on a stark white background (not unlike the cover).

Also, there's a pretty blatant coloring error in one panel. 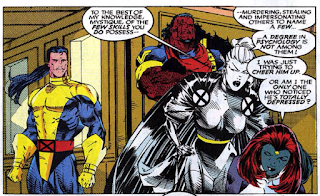 Austin's Analysis
This is the first issue of Uncanny X-Men I ever read, and like X-Men #8, it features a lot of the same stuff that got me hooked on the X-Men and comics in general, chiefly, a focus on characterization and character interaction. There's no real plot to speak of to this issue; rather, it's a series of interactions between characters. More Bishop orientation. Archangel & Iceman, Archangel & Mystique. Jean Grey & Professor X. Storm and Forge arguing, then Forge proposing, while Iceman & Opal meet his parents and are attacked by cyber-ninjas (in the two closest things to a narrative plot this issue has). Once again, it stresses the idea that these characters are people first, superheroes second.

The other thing that really stands out about this issue, even moreso than in X-Men #8, is how steeped in history it is. There are footnotes galore in this one, referencing everything from recent issues of Wolverine to "Fall of the Mutants", and there's stuff like Hiro and the cyber-ninjas and the transformation of Angel into Archangel that are references to past stories without getting a specific footnote. Once again, this creates the impression of a larger world, of a rich history and backstory to this world. Reading this for the first time, each one of those footnotes was like a tease to a whole nother story. It made me want to read those issues, to learn first hand the context of the events being referenced. Thus this issue, even moreso than X-Men #8, is really responsible for getting me excited about the history of the series, of ensuring that in between new issues of the series, I'd be reading as many old ones as I could get my hands on.

Next Issue
Tomorrow, the truth about Domino in X-Force #11. Friday, the debut of Rhapsody in X-Factor #79. Next week, the X-Men arrive in the Big Easy in Ghost Rider #26.
Newer Post Older Post Home
Posted by Austin Gorton at 12:00 PM