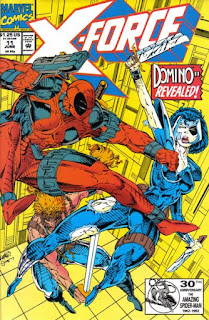 In a Nutshell
Deadpool fights Domino, teasing her true identity.

Plot
While a contingent of X-Force delivers Sauron's body and Thornn back to the Morlocks, warning them not to repeat their leader's folly, Deadpool infiltrates their base, knocking out Siryn before battling Shatterstar and doing the same to him. He then attacks Domino, whom he calls "Vanessa", on behalf of Mr. Tolliver. He asks her to tell him she's not falling for Cable, but she can't, Enraged, he gets the upperhand, then reminds her that when this job is over, she'll still just be Vanessa, and the property of Tolliver. He leaves, warning her not to make him come back and remind her again. Meanwhile, Kane tells GW Bridge that Cable is apparently leading the MLF as well as X-Force. Bridge asks if he wants SHIELD to get involved, but Kane says it's better to keep their involvement on the sly. For now, he and the rest of Weapon: Prime are ready to make their move. Elsewhere, Tolliver visits a prisoner, whom he's held captive for over a year, declaring that soon no one will remember anything of her: Domino!

Firsts and Other Notables
This issue reveals that Mr. Tolliver is holding someone named Domino prisoner, while the Domino living with X-Force is a woman named Vanessa. It's not quite spelled out yet, but we'll shortly learn that Vanessa is a shapeshifter (and Deadpool's girlfriend), who was hired by Tolliver to get close to Cable by impersonating Domino. 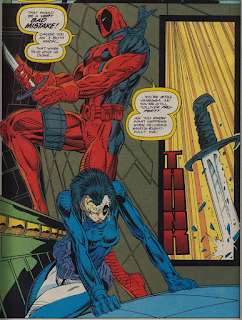 Weapon: Prime, mentioned last issue, debuts here (via a sideways double page splash, no less). Though they're unnamed, this marks the first appearances of Tygerstryke and another Yeti (Marvel has a few different Yeti characters; this is meant to be a new one. It's also possible he's supposed to be a controlled (hence the collar) Wendigo here, which would make sense given Wendigo's aptitude for roaming the Canadian wilderness, but later issues call him Yeti), who join Kane and Rictor on the team. Neither Tygerstryke nor Yeti get much development in the issues ahead (I don't think either even gets a line), and are pretty much just remembered today (if at all) as symbols of 90s emptiness. 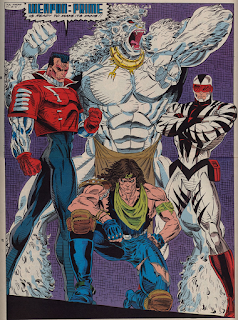 Mr. Tolliver is shown to have a diminutive associate named Pico, appearing here for the first time.

Given the quasi-relationship that will develop between them in his second limited series, Deadpool's casual dismissal of Siryn in this issue is worth noting. 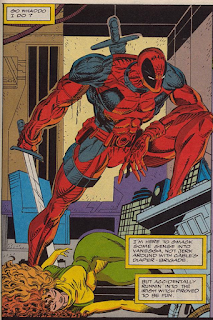 A Work in Progress
In the wake of their attack on X-Force, Cable and a portion of the team visit the Morlock Tunnels, declaring that they don't hold the Morlocks as a whole responsible for Masque's actions, before delivering Masque's hood and the body of Sauron, them showing them that Cannonball is alive, and releasing a beaten Thornn, all to serve a reminders to leave X-Force alone moving forward.

Tolliver refers to Cable's old mercenary group as the Six Pack, rather than the Wild Pack (as they were in issue #8); this apparent discrepancy will eventually get explained in the Cable limited series.

The Grim 'n' Gritty 90s
In offering his rationale for delivering Sauron's body to the Morlock's, Cable declares that
"image is everything". Maybe the Rob managed to sneak a line of dialogue in before he left. 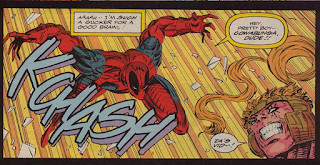 Tygerstryke, who has elbow knives and a name that is two unrelated things mashed together, with the "i" in both words replaced with a "y", is about as 90s as it gets.

501 Genes
While talking to Kane about Cable, Bridge is apparently pooping his pants. 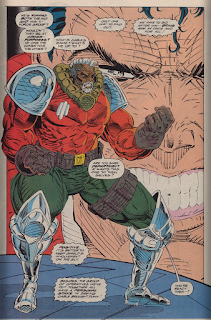 To the EXTREME!
Even X-Force's villains aren't as extreme as they could be, with Deadpool opting not to kill Shatterstar.

Austin's Analysis
Like so many others, this issue is essentially one long fight scene, bookended by a few pages wrapping up the previous story and a few more setting up the next one. Even worse, the impetus for the issue long fight - Deadpool sending a message to Domino on behalf of Tolliver - doesn't actually tell us what the heck is going on with Domino, why Tolliver is sending her a message, or why Tolliver has another Domino tied up in his basement; it merely teases it some more (knowing the truth, it seems fairly obvious, but reading it for the first time, it's not, really, partially because Domino is still such a blank slate; I mean, at this point, for all we know, "Vanessa" is just Domino's real name). The end result is an issue that doesn't really accomplish much, with even the fight scenes marred by the sloppy Liefeld mimicry, though at the time the number of pages devoted to Deadpool (who even gets his own first person narration boxes) was probably enough to carry it. We tend to think of decompressed storytelling as a modern thing, or at least, a product of the early 00s Jemas/Quesada, write-for-the-trade era. But at this point, this series is about as decompressed as it can be.