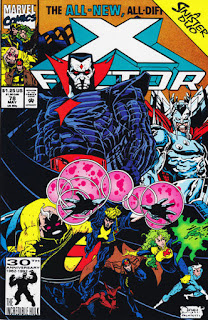 In a Nutshell
X-Factor is divided as they protect a controversial doctor from the MLF.

Plot
Dr. Tucker receives a call from a young woman, warning him that the MLF is targeting his clinic. Meanwhile, Val attempts to unveil X-Factor's new Danger Room to the team, but the doorknob comes off the door, while Mr. Sinister arrives at MLF headquarters to retrieve Hairbag & Slab. Later, Havok contacts the X-Men to warn them about Mr. Sinister, after which Val announces that X-Factor has been called in to help protect Dr. Tucker. When the team learns the nature of his medical work, both Wolfsbane and Quicksilver opt to sit out, due to ethical conflicts with Tucker's work. When the MLF attack the clinic, Wildchild seriously wounds Tucker before X-Factor arrives, and Wolfsbane is forced to enter the fray to help Polaris, paying her back for recently letting Cannonball go free. But when a dying Dr. Tucker asks Wolfsbane to deliver his data to the government, she instead destroys it. Upon returning to their base, Stryfe is curious how X-Factor knew to expect their attack, and Tempo removes her helmet, revealing the face of the woman who had earlier warned Tucker. As X-Factor flies home, Quicksilver tells the team about his daughter, and how his initial reaction to her not being born a mutant damaged his marriage.

Firsts and Other Notables
The abortion parallels to this story become even more transparent in this issue, with Dr. Tucker now having a means to not only identify (with a high but not guaranteed level of accuracy) whether an unborn child will be a mutant, but also to remove the "mutant gene" to ensure the child will be born normal, something which not surprisingly outrages Wolfsbane, prompting her to first sit out the mission and then, after intervening to help Polaris, destroy Tucker's research herself. 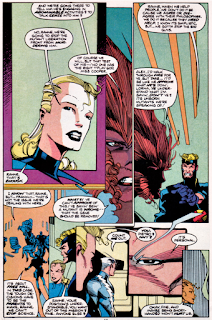 As described by Peter David on his website here, he originally intended for the story to be more directly about abortion, with the "process to remove the mutant gene" being added after the fact when Marvel got worried about bad PR following Northstar's outing (the original idea was that Dr. Tucker could identify whether a child was a mutant, but the only option for parents then was to abort the pregnancy).

Quicksilver sits out the mission to defend Tucker, and later, tells the team about his complicated relationship with this otherwise-human daughter Luna, and how that's affected his marriage, the first any of this material is covered, at least in X-Factor. 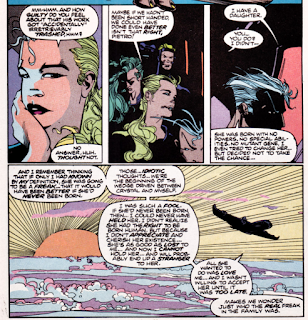 Havok contacts Cyclops and Professor X to tell them about Mr. Sinister, and we also discover that X-Factor has figured out that Sinister was impersonating Senator Shaffran when he fought them in issue #75. They also discuss X-Factor, establishing for the first time the relationship between the three teams, and that the X-Men as well as X-Factor consider X-Force wanted fugitives(which is interesting given that Cyclops was at least willing to work with the Cable-led New Mutants not that long ago), something which will factor into the events of "X-Cutioner's Song". Also, keep in mind that at this point in time, Professor X has never met or interacted with Mr. Sinister directly, as he was off with Lilandra when Mr. Sinister first appeared and during the events of "Inferno", something that I never really put together as a kid, when I assumed Mr. Sinister had been around a lot longer and fought the X-Men a lot more than he actually had. 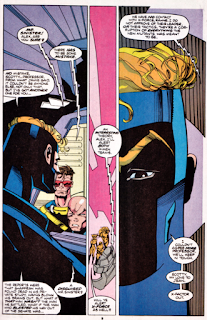 MLF member Reaper gets his leg cutoff this issue, as Zero's teleportation portal closes around it, establishing a running gag in which the character keeps losing limbs (after Shatterstar cut off his hand in X-Force #1, mentioned here). Also, apparently, the MLF employs medics, complete with Red Cross insignia on their uniforms. 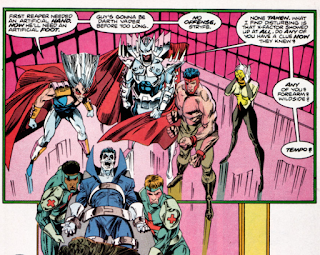 This issue strongly implies that Tempo is the daughter of Dr. Tucker, another effort on David's part (after establishing the Slab/Thumbelina siblinghood last issue) to humanize the MLF a bit (though I don't think this particular relationship ever gets mentioned anywhere again), though the dramatic reveal at the end of the issue would have worked better if the same artist had drawn both the woman who called the clinic and the unmasked Tempo. 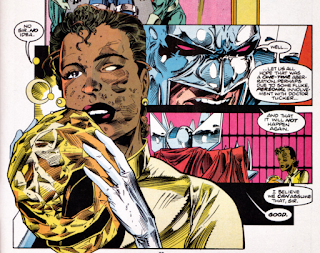 Val attempts to unveil X-Factor's very own Danger Room this issue, but after much mocking from the team, the doorknob falls off when she tries to open the door. 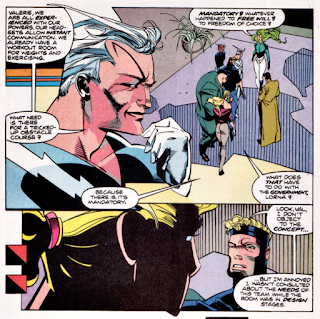 Collection Recollection
This is the first issue of the series that I bought and read, though I purchased after my initial X-Men and Uncanny X-Men purchases.

Brandon Petersen, who will shortly (and briefly) takeover as the regular artist on Uncanny X-Men, draws roughly the last third of this issue.

A Work in Progress
Despite appearing on the cover together, Stryfe and Mr. Sinister only appear together on one page in the issue, though their apparent partnership is somewhat interesting given their later interactions during "X-Cutioner's Song".

Quicksilver is till uniform-less, but Val dons an X-Factor uniform this issue.

Recalling the gag from last issue, Strong Guy is pleased that the MLF at least recognizes them as X-Factor this time.

The Grim 'n' Gritty 90s
Guido claims to friends with actress Sean Young, probably most famous around this time for her bizarre attempts to be cast as Catwoman  in Batman Returns (after being cast but having to leave the role of Vicky Vale in the first Batman movie). 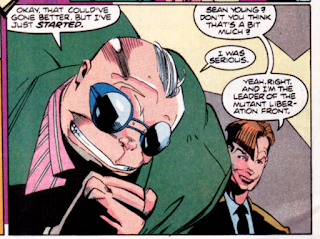 Peter David on the changes to Dr. Tucker's storyline.
"Originally, I developed a story in which a scientist developed a fool-proof test that would enable couples to determine—along with the currently existing tests for actual genetic-based diseases–whether or not a mother’s unborn fetus was going to be a mutant. “You will give birth to something that many people will term a freak,” the doctor intoned. Parents had to decide whether or not to abort their child. Among other things, there were several intense discussions among the team members about a woman’s right to choose, with the pro-choice Polaris being particularly at odds with the right-to-life Rahne Sinclair.

The editors were gung-ho on the story, and it was drawn and scripted as intended… until a ton of backlash hit Marvel over Northstar’s being gay in Alpha Flight. And I mean backlash: For starters, representatives of a major retail chain told Marvel they didn’t want to carry any mutant-related toys, including the entire X-Men line, because the mutant line had been “tainted.” It was nuts. And no, I don’t blame John Byrne for it, so don’t even go there. But the upshot was that the Powers That Be ordered that nothing of any controversial nature was to see print in any Marvel book… especially a mutant book.

So key scenes were rescripted, mooting the question of abortion by having the doctor develop a procedure that would simply remove (somehow, amazingly, mystically) the mutant gene from the fetus. Yes, that’s right: He could rewrite DNA while in utero. Don’t look at me, I just work here."

Austin's Analysis
My first issue of X-Factor, and there's one page in particular I can point to that got me hooked on the series, the X-Men, and comics in general: the page where Havok contacts Cyclops and Professor X about Mr. Sinister. Much like the scene in the previous issue between Wolfsbane and Cannonball, it speaks to the shared universe element of superhero comics, and of the narrative history of the X-Men. Havok is on one team, his brother another, and he contacts him to share intelligence on a threat that is germane to both of them. Then there is discussion of X-Force, a third series, which quickly establishes the relationship between the authorized X-Factor and semi-authorized X-Men and the outlaw X-Force. Again, in one page, it's made clear that there is a narrative world that exists outside of this one series, of which this series is but a part, and that is captivating (and at the time, fairly -but not entirely - unique in fiction).

The other thing I love about that one page is Havok saying "Give my love to Jean". It's a brief and seemingly pointless bit of dialogue (it doesn't advance the plot, nor speak to the larger discussion of Mr. Sinister and X-Force), but it reinforces the notion that these characters are like real people: Alex is talking to his brother, and when he says goodbye, he acknowledges his, for all intents and purposes, sister-in-law, in the same way any ordinary person in the real world might when speaking to a relative(ie "Say hi to dad!" or "give my love to Sis!"). It's one page and a few lines of dialogue, but in that small space, the idea of both a shared universe, that each series doesn't exist in a vacuum, independent of each other, and that the characters, for all their bright costumes and fancy powers, are otherwise normal, fully-realized people, is sold. Those were engaging ideas, at least to this first time reader just getting comics, and they utterly hooked me.

Next Issue
Next week: "Unstacking the Deck" returns with the first series of X-Men trading cards.