The Milch Studies - The Cast of NYPD Blue, Season One 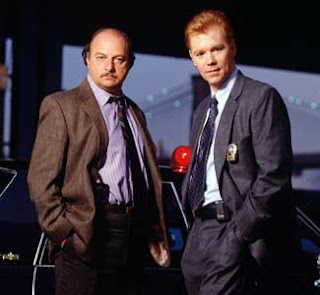 After a solid year of internal strife between ABC and the producers, NYPD Blue debuted on September 21, 1993 on most ABC affiliates (around a fourth of them refused to air the show, due to the partial nudity and “adult” language.)

A few notes at the start:


The regular cast of the first season (i.e., those who receive a credit in the opening sequence) include… 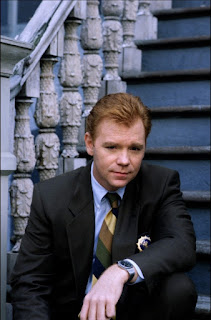 David Caruso as Detective John Kelly
Where to begin on this one?  Caruso, in a nutshell, had an acrimonious relationship with the producers and famously announced he’d be leaving the show after the first season to pursue his movie career.  After starring in two flops, and becoming a regular punching bag for comedians, Caruso attempted a TV comeback in 1997.  Nothing really stuck until he landed the lead on CSI: Miami, where he became another pop culture punchline for his earnest delivery of a series of wretched puns during the show’s openings.  (CSI: Miami was a monster hit for years, however.)

The casting of Caruso was always controversial, behind-the-scenes.  Series co-creator David Milch auditioned Caruso early on to play John Kelly, the thirtyish partner of Andy Sipowicz, his one-time mentor who’s become a self-destructive addict.  Milch reports in his True Blue book that he didn’t care for Caruso’s audition -- he felt Caruso lacked the empathy that’s an inherit part of Det. Kelly’s character.  While auditioning with someone reading Sipowicz’s part, Caruso kept talking over the end of Sipowicz’s lines, indicating that he knew what Sipowicz was going to say and had already discounted it.  Milch thought it was an interesting way to go, but it didn’t ring true for the character.

Steven Bochco, more recently, gave a different side of the story.  He indicates that casting Caruso was his call; after someone mentioned Caruso’s name to him, Bocho knew he had to play Kelly.  (Caruso played an Irish gang leader years earlier on Hill Street Blues and impressed Bocho even back then.)  Milch begged Bocho not to cast Caruso, indicating that as a crazy person, he knew crazy when he saw it and could tell Caruso was nuts.

(Rob Zombie was also not a fan.)

David Caruso did seem fated to play the part.  (Bocho originally wanted Jimmy Smits, who was unavailable.  How Smits would’ve played the very Irish Detective Kelly isn’t clear to me.)  Various casting agents kept mentioning Caruso for the part, and even NYPD Blue’s police consultant suggested Caruso play the role after seeing him portray a cop in the film Mad Dog and Glory.  (Watch that clip to see an R-rated interpretation of John Kelly.)  From Bill Clark’s perspective, David Caruso was pure cop.  Clark apparently wasn’t much of a Caruso fan after meeting him, though -- he caught Caruso in a lie during their very first conversation, as detailed in True Blue. 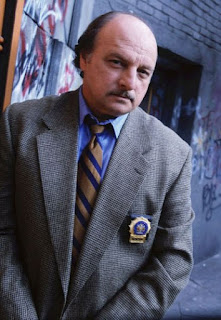 Dennis Franz as Andy Sipowicz
Franz is the only actor to appear in every episode of the show over the course of the twelve seasons, and is inarguably the star of the series.  Much of the friction in the first year of the show revolved around Caruso’s feeling that Franz was receiving better material from the writers.  I can’t totally disagree -- Franz is playing a middle-aged detective who’s descended so deeply into alcoholism, he’s destroyed not only his career, but every meaningful relationship in his life.  (When Sipowicz’s eighteen-year-old son appears a few episodes into the season, he asks his father “Where are you hiding your bottles now, Dad?”)

Detective Kelly, meanwhile, is more of the rock of the precinct.  He’s the guy everyone brings their problems to, and he quickly becomes the mentor to the squad’s youngest detective.  (Every cast member of the show stopping Kelly in the hall and asking him to help out with a problem was parodied by Mad magazine during the first season.  There’s one episode this year that has Kelly being pulled aside twice by two separate people before he can even walk up the stairs to his desk.)  Kelly does have some inner turmoil -- he’s reluctantly going along with a divorce even though he still loves his wife, and his new girlfriend has secret mob ties -- but it doesn’t have the impact of watching Sipowicz piece his life back together over the course of the first season.

Caruso made his displeasure known, vocally, throughout the first year of the show.  His tantrums became labeled by Bocho as “The Caruso Hour,” meaning the crew lost an hour of shooting a day because Caruso would find something in the script to pick a fight over.  Dennis Franz apparently decided to deal with Caruso by simply ignoring him, which is likely an explanation for why the duo actually don’t share that many scenes.  We’re told that these guys have been partners for six years, that Sipowicz “raised” Kelly and taught him what he knows, and their scenes together do convincingly portray a genuine friendship.  Yet, many of the cases they work this year are worked separately, and any time the viewer is led to believe the two detectives are about to go out for dinner together, another character will pop in and introduce a new situation that derails their plans.  Even Sipowicz’s attempts at sobriety, the heart of this season, are barely addressed in his scenes with Det. Kelly.  Kelly asks him once “how you doin’” with the sobriety thing, and that’s the end of it as far as Kelly seems to be concerned.

Franz’s portrayal of Sipowicz was so beloved by critics that it became something of a cliché in the ‘90s.  (Not Franz’s portrayal; the adulation he received in the press.)  I remember Jay Leno once joking that giving out Emmy nominations was pointless since everyone knew Franz was going to win anyway.  Franz really is that good, though.  He was reluctant to star in the show, not wanting to be typecast as a cop, but it’s impossible to imagine anyone else ever playing this role.  Sipowicz’s various flaws, coupled with his devotion to the few people left in his life and his compassion towards those he views as unfairly victimized, are fully realized by Franz.  Franz turned out to be correct about being typecast; it seems as if he retired from acting after the show finished its run, and to be honest it would be difficult for me to look at Franz and not see Sipowicz.

NYPD Blue is, at its best, a show about flawed people trying to do good within a flawed system.  Franz’s portrayal of Sipowicz dramatizes that idea in every episode; all of Sipowicz’s virtues and failings become real for the audience, and he pulls it off for twelve seasons. 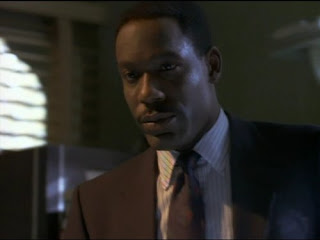 James McDaniel as Lieutenant Arthur Fancy
Fancy is the boss of the show, the Lieutenant who assigns cases to the detectives and answers to “the brass” if a case isn’t cleared, or a detective screws up.  Many cop shows will have lieutenants actively participating in investigations, but Blue tends to portray the Lieutenant as a position somewhere in-between detective and bureaucrat.  Fancy as a minority boss within a mostly white department isn’t glossed over -- in fact, it becomes the starting point for many of his storylines, as his white bosses continually look for ways to get him out of his job.

James McDaniel, by the way, is a fantastic actor.  You might not realize how good he is if you’ve only seen a few episodes of the show, but whenever McDaniel is given material that takes him out from behind his desk, you get a sense of a multilayered character hiding behind the dispassionate boss’s façade.

McDaniel had a complaint about the series that you’ll hear numerous times when discussing the cast of the show -- he didn’t have enough to do.  The producers would occasionally indulge him and do at least one Fancy-centric episode a season, but eventually McDaniel grew tired of his somewhat thankless role and quit the show. 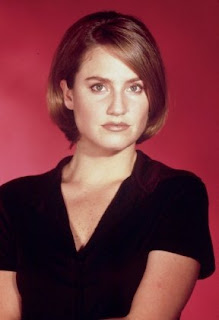 Sherry Stringfield as Assistant District Attorney Laura Michaels
Laura is Det. Kelly’s ex-wife, although the show continues to hint during the first half of the season that maybe they’ll get back together.  The romantic subplots on the show are very clearly invented on the fly; every few episodes characters hook up, break up, get back together, and occasionally act as if they were never couples.  Sherry Stringfield was intended to be the original ADA on the series, the prosecutor who deals with detectives on a daily basis, but found her stories continually taken by another actress, Sharon Lawrence, who was given an increasing role as Sipowicz’s love interest.  According to Milch, Stringfield politely asked to be let go before the first season was over.  A few months later, she was cast on the next big network drama of the era, E.R. 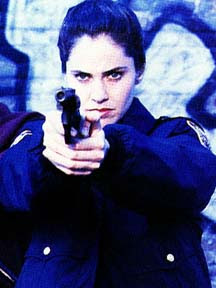 Amy Brenneman as Officer Janice Licalsi
Brenneman goes on to become a TV star in her own right, but here, she’s mainly in the role of girlfriend.  Or, as Brenneman later described it, a “mob chick” the writers didn’t know what to do with.  Officer Janice Licalsi is a second-generation cop who discovers her father has been on the mob payroll for years, doing minor work like tipping off the right people before a raid.  In order to prevent his name going public, she agrees to “get close” to Det. Kelly, who’s irritating mobster Angelo Marino, and kill him.  Instead, she falls in love with Kelly and kills Marino and his driver.

Janice Licalsi Character Notes:  Uh…I got nothin’.  Brenneman is actually quite good in this role, she just doesn’t stick around long enough to become a fully-realized character. 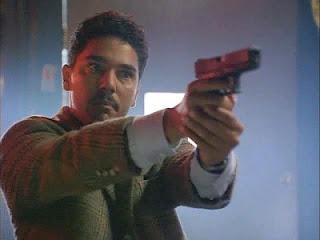 Nicholas Turturro as Officer James Martinez
James Martinez is a young cop from the Anti-Crime division that’s assigned to work with Det. Kelly after Sipowicz is shot in the pilot episode.  What exactly Anti-Crime actually is isn’t quite spelled out in the show (much of the specifics of police work are left to the audience to infer).  He isn’t a uniform cop, yet he’s not officially a detective, either.  Much of the first season is devoted to Martinez learning the ropes and proving himself as a cop.  He’s given his gold shield and promoted to detective during the Christmas episode, signaling the steady role he’ll play on the show during the first half of its run.

Those are the major players.  In my next post, I’ll detail the recurring guest stars of the first season (some of these characters go on to impact the entire run of the series), and compile a list of all of the elements from Season One that are dropped as the series evolves.