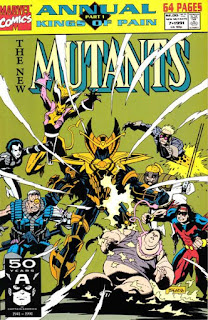 In a Nutshell
The New Mutants battle the Alliance of Evil.

Plot
First Story: The Alliance of Evil attacks St. Simon Academy, the school attended by former X-Factor wards Artie, Leech and Taki. With the rest of the team running interference, Harness forces a young boy named Piecemeal to absorb some ambient energy lingering at the school. Artie, Leech and Taki try to stop the Alliance, but are easily overpowered. Taki wakes up to find the New Mutants waiting for him. After meeting their new members, he tells them what he knows, and Cable proceeds to devise a plan to find out why the Alliance has been attacking sites up and down the East Coast. Meanwhile, the IDIC Corporation, which hired the Alliance, is overseeing an energy absorption process that could have ramifications for both AIM and Genetech, and the whole situation is being monitored by two shadowy figures. Eventually, the New Mutants track the Alliance to Niagra Falls, where Piecemeal absorbs more energy. He and Harness escape, but the New Mutants defeat the rest of the Alliance, and using information given by them, proceed to infiltrate the headquarters of Genetech, where they find the New Warriors waiting for them.
Second Story: Freedom Force is in Iraq, having been tasked with retrieving German scientist Reinhold Kurtzman from the Kuwaiti embassy and bringing him to safety. Fighting their way through Iraqi forces, they reach the safehouse, but find it empty, and realize they've been led into a trap. As Super Sabre is killed and Crimson Commando injured, Blob and Pyro call out for their opponents to show themselves, and a group appears calling itself Desert Sword.

Firsts and Other Notables
Continuing the approach of last year's annuals in telling a series of four part stories in the annuals of a family of titles (or a group of thematically-similar ones), this issue kicks off "Kings of Pain", a four part story that unfolds across the annuals of the three X-books which get traditional annuals, with New Warriors taking over from the 1990 Fantastic Four annual as the fourth "adoptive" X-annual.

The era of extras-stuffed annuals is in full swing at this point; in addition to the main story, this issue contains two additional stories, the second of which being a serial that will run through the two other X-annuals and deals with the final mission of Freedom Force (its destruction paving the way for the creation of the upcoming government-sponsored X-Factor team). In the course of this issue's chapter, Super Sabre is killed (a death which, "Necrosha" aside, has mostly stuck). He is the second of the team's "Old Soldiers" recruits to die (and Crimson Commando is also severely injured in this issue). 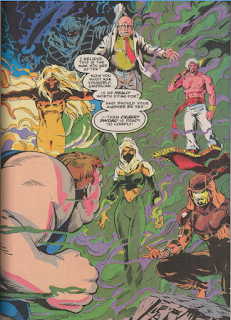 The Alliance of Evil, the C-list Brotherhood of Evil Mutants run by Apocalypse in his first appearance and which popped up occasionally in X-Factor, appears in this annual. They will continue to play a role in this story, but this is essentially the last hurrah for the group (though Frenzy will shortly thereafter pop up as one of Magneto's Acolytes and, much later, join the X-Men for a brief time). Their fourth member, Timeshadow, is noted as being absent but no explanation is given (Cable doesn't care where he is). It almost reads like a TV show that couldn't get an actor to come back, except it's, you know, a comic book. 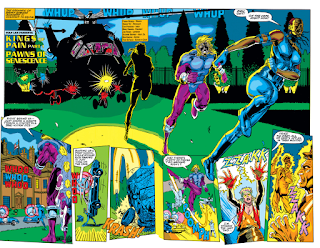 Returning Alliance members Frenzy, Tower and Stinger are joined by two new members, the armored Harness and Piecemeal, a small boy who is essentially Harness' thrall. Both are appearing here for the first time, and thus far, have only appeared in this story. 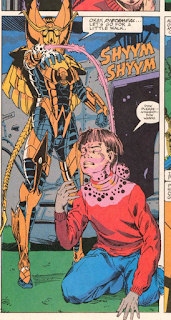 Artie, Leech and Taki, all that's left of the X-Terminators, appear in this story (someone gets Artie and Leech mixed up, making Leech mute and having Artie talk), as well as the annual's third story (drawn by Jon Bogdanove), a relatively slight but inoffensive tale in which Artie and Leech are mistaken for aliens by an elderly resident of the town where there school is. Eventually, all three befriend the women, who vaguely resembles Annalee, Leech's deceased adoptive Morlock mother. 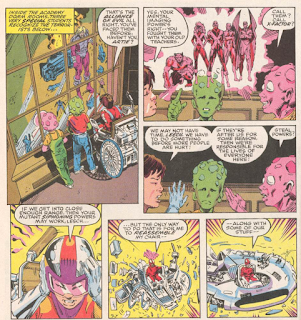 An interlude shows a pair of shadowy figures playing chess as they discuss the events of the story (a favorite narrative device of the 90s); this pair will be shown to be influencing events of this story behind the scenes throughout it's various chapters, their identities revealed in the final chapter. 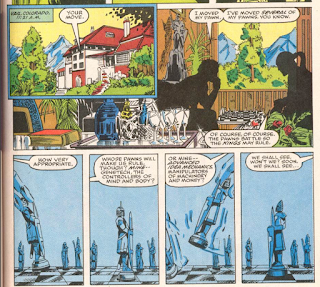 Setting up the next chapter of the story unfolding in their annual, the New Warriors pop up on the last page.

Hellboy creator Mike Mignola does the cover for this issue, as well as the other two X-related annuals in this story.

In addition to the three stories, this issue also features an infograph detailing the relatively longevity of the various New Mutants members... 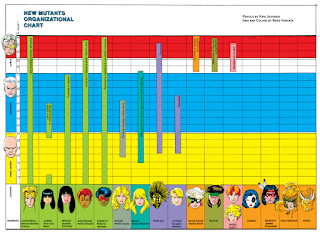 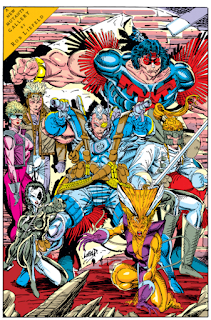 and another, featuring the team circa New Mutants #93, by Art Thiibert. 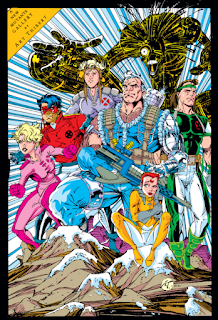 Creator Central
Guang Yap, who filled in for Liefeld on New Mutants during "The X-Tinction Agenda", draws this issue. He is inked by Dan Panosian, who will later do some fill-in pencil work on X-Force and X-Factor.

A Work in Progress
By way of introducing the team to Taki, Boom-Boom provides a rundown on all of soon-to-be-X-Force's members, featuring several pop culture references. She also refers to the group, tongue-in-cheekly, as "the new New Mutants". 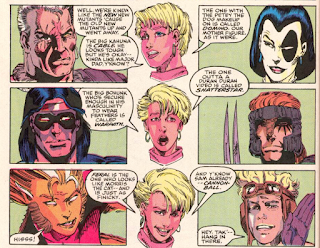 The New Mutants are shown using two different vehicles in this issue; first, a mostly normal looking military helicopter, and then later, a more sci-fi craft, vaguely reminiscent of the Sentinel ship the X-Men stole from Larry Trask back in the 60s and was destroyed by Dark Phoenix in X-Men #135. No explanation is given as to where they got either craft.

The older woman befriended by Artie, Leech and Taki is Magneto's mom!

Artistic Achievements
There's a visually clever bit where Domino and Cable urge a still-large Tower to cooperate and answer their questions, with each pointing a gun at his very large head. 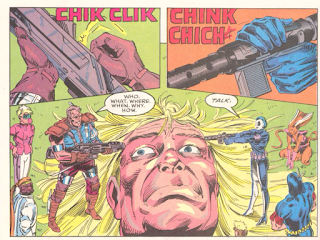 The Cable Guy
Cable says attacking hard and fast is always the best way to go, which, while clearly meant to showcase his tough guy persona, is actually terrible tactical advice; sometimes it is better to attack more stealthily and with a judicious use of force.

The Grim 'n' Gritty 90s
Boom-Boom jokes that the Genetech lab is more complicated than the inside of her VCR.

Freedom Force's mission in the Middle East is directly tied to the events of "Operation: Desert Storm".


Teebore's Take
This annual is something of an oddity. Published after New Mutants had been formally cancelled and before X-Force #1 was launched, it chronicles an adventure of a team that looks an awful lot like X-Force in its makeup, but is still technically the New Mutants (the term "X-Force" isn't used, though "New Mutants" is used only indirectly). In terms of showcasing X-Force's more extreme! approach, this doesn't really work, either, as the team is brought into the plot via Boom-Boom's old X-Factor connections, and most of Cable's 'hit 'em hard and fast!" rhetoric isn't that different from the standard superhero fare, even among the New Mutants (if anything, the second story, in which Freedom Force is rather brutally attacked, is the more shockingly-hardcore story). The end result is a team caught, briefly, in transition, no longer the New Mutants but not really yet X-Force.

Meanwhile, though the entirety of "Kings of Pain" as a whole is kind of a mess, this introductory chapter isn't too bad, as it's mostly concerned with setup (so all the vague teases aren't as off-putting, since there's still time for them to be explained) and it doesn't get quite as bogged down in plot and the various nefarious groups working against each other as later chapters. It also continues to showcase Nicieza's knowledge of/affinity for the X-books' history, as the Alliance of Evil appears again for the first time since shortly before "Inferno", and the New Mutants/X-Force's connection to Simonson's X-Factor is used as the vehicle to bring them into the story, giving us a quick check-in with Artie, Leech and Taki (not seen since shortly after "Inferno"). Neither element is integral to the plot (the Alliance moreso, but even then they're mostly canon fodder) but it helps make at least this chapter of the story feel connected to the larger X-narrative, even while X-Force is poised to push against that narrative.

Next Issue
Tomorrow, X-Factor comes face to face with Apocalypses in X-Factor #67. Next week, "Kings of Pain" continues in New Warriors Annual #1 and X-Men Annual #15.