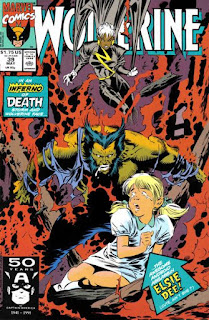 In a Nutshell
Albert and Wolverine help disarm Elsie-Dee.

Plot
Storm and Wolverin try to rescue Elsie-Dee from he burning warehouse, but Elsie-Dee makes it so that only Wolverine can enter the building, walking through the flames to save her. Impressed by his devotion to saving her, Elsie-Dee is reluctant to kill him. Meanwhile, Bonebreaker considers admitting to Pierce that he misprogrammed Elsie-Dee, but decides against it. Back in Venice, the damaged Albert meets up with Sally and his gang, and agrees to help them if they help him. At the warehouse, Elsie-Dee admits to Wolverine what she is, and though both she and Storm insist he get as far away from Elsie-Dee as possible, Wolverine refuses, instead telling Elsie-Dee to fight her programming. 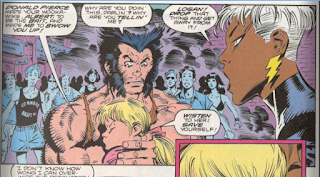 Just then Albert contacts her through their radio link, pleased that she's still alive, and with the help of Sally's gang, breaks into a Radio Shack and uses their equipment to hack into Federal databanks, searching for the detonation sequence for Elsie-Dee's bomb. Just as Elsie-Dee can no longer hold back the explosion, he finds the sequence and transmit it to her, enabling her to disarm herself. However, his actions have drawn the attention of the FBI, and when Albert emerges from the Radio Shack, he's gunned down. Back at the warehouse, Wolverine applauds Elsie-Dee for not giving up, telling her everything is going to be fine. But she disagrees, saying she's trying to reach her friend Albert, but his frequency is dead.

Firsts and Other Notables
This can't be the first time Wolverine refers to himself as "the ol' Canucklehead", can it? 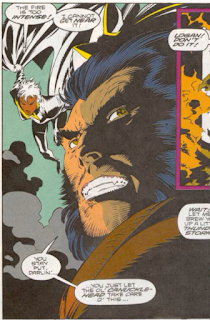 A Work in Progress
Storm hangs a lampshade on Wolverine's affinity for developing strong bonds with young women. 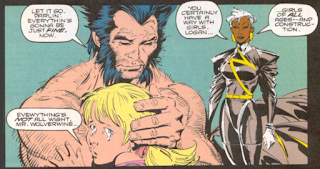 The Grim 'n' Gritty 90s
This issue once again features a crowd of onlookers who believe the fantastic things they're seeing are the result of special effects from a movie shoot. 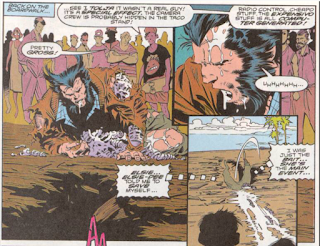 Storm uses the word "animatronic" this issue, which appears with a trademark symbol behind it for some reason. 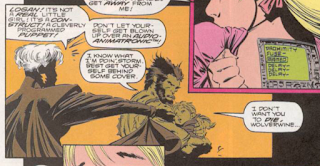 The Best There is at What He Does
We are reminded that while Wolverine's healing power fixes his wounds, it doesn't prevent pain. 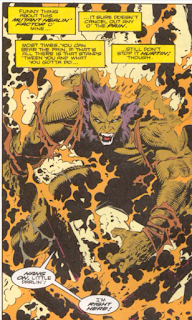 We also distinctively see that his hair regrows as part of the healing process. 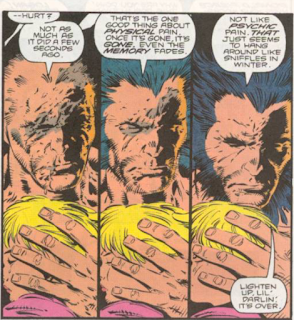 Wolverine says the thing he's really best at is not giving up. And that's one to grow on! 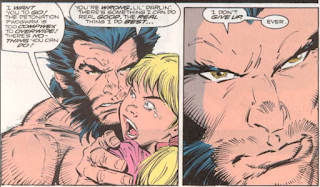 Teebore's Take
While the plot doesn't really move forward all that much (Wolverine spends the majority of the issue doing little more than hugging a robot) and Storm seems slightly out of character (I can see Storm ultimately buying into a pragmatic argument, but shes too quick to just write off Elsie-Dee as a soulless automaton), the same sort of absurdist energy that carried the previous issue remains, making the story, at the very least, a different sort than the usual fare. Also, while it goes unstated here, there's some interesting thematic dynamics in play regarding Wolverine sticking up for Elsie-Dee so strenuously: while Pierce simply intended her five-year-old form to lure in Wolverine from the perspective of a hero wanting to save an innocent child, instead, Wolverine has been "caught" by Elsie-Dee because he sees her fighting to overcome her programming just as he's done, in a manner, most of his life. Intentional or note, it adds a bit of depth to an otherwise delightfully absurd story.